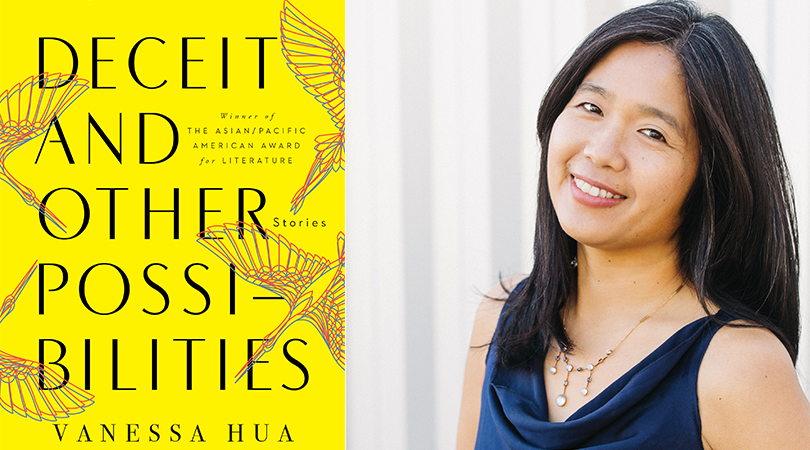 This week, we spoke to spoke to Deceit and Other Possibilities author Vanessa Hua.

Vanessa Hua: Little Women by Louise May Alcott, followed closely by the Little House in the Big Woods by Laura Ingalls Wilder.

VH: Girl with a Pearl Earring by Tracy Chevalier.

VH: Is it a one-sided conversation? I’m shaped by short story masters Yiyun Li, Edward P. Jones, Junot Diaz, Tobias Wolff, and others, but to be honest, the book might well be in conversation with everything I’ve read as I was writing it; influences are hard to pinpoint. It’s like how water vapor forms around dust in the clouds. All the reporting I’ve done or conversations I’ve had or the books I’ve read—they’re seeding the cloud until finally it gets heavy enough to start raining.

VH: Atonement by Ian McEwan. I may not have actually cried, but I remember sinking into a deep gloom and into an a fury at the narrator.

VH: America is Not the Heart by Elaine Castillo.

VH: Rad American Women A-Z: Rebels, Trailblazers, and Visionaries who Shaped Our History . . . and Our Future! By Kate Schatz and illustrator Miriam Klein Stahl. My go-to birthday gift for kids.

VH: A Farewell to Arms by Ernest Hemingway, and all the imitations it spawned.

VH: “No one” varies by context, doesn’t it? There are authors on the New York Times bestseller lists I’ve never heard of, whereas some authors whom I fan girl over draw blank stares from people who are avid readers. Yu Hua has been mentioned as a Nobel prize candidate for China, so it feels strange to bring him up for this question, but if you haven’t done so already, you must read his rollicking, sweeping Brothers.

VH: 1984 by George Orwell. In high school AP English, we had to write an essay about which dystopia we’d rather live in, Orwell’s or Aldous Huxley’s Brave New World. I picked Huxley, though!

VH: Can I say….mine? Jokes aside, I’m thrilled by the quadruple win by Parasite at the Oscars, which feels like a victory for art, for representation, for humanity. I’m hoping that opens the way for more stories that reflect the world we live, that have the power to inspire a change in thinking and a change in action.

Vanessa Hua is a columnist for the San Francisco Chronicle and the author of A River of Stars and Deceit and Other Possibilities. A National Endowment for the Arts Literature Fellow, she has also received a Rona Jaffe Foundation Writers’ Award, the Asian/Pacific American Award for Literature, the San Francisco Foundation’s James D. Phelan Award, and a Steinbeck Fellowship in Creative Writing. Her work has appeared in publications including The New York Times, The Atlantic, and The Washington Post. Find out more at vanessahua.com. 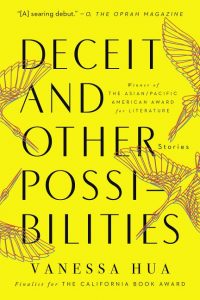 Vanessa Hua’s Deceit and Other Possibilities is out on March 10th from Counterpoint.