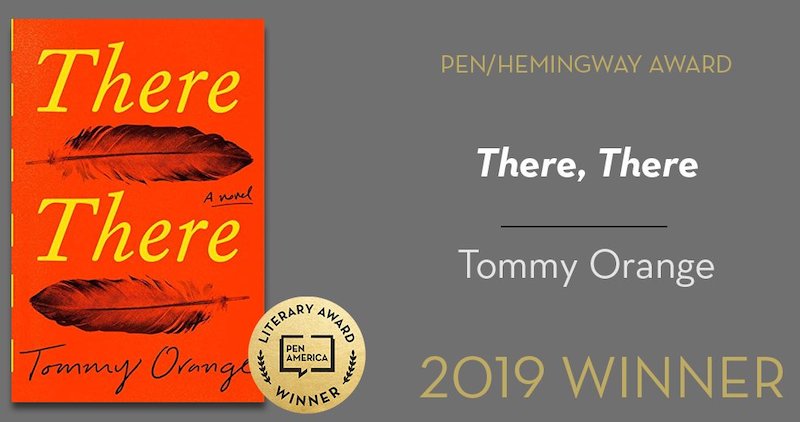 Orange's critically-acclaimed There There took home this year's prize

Congratulations to Tommy Orange, whose debut novel There There was today announced as the 2019 winner of the prestigious PEN/Hemingway Award. The PEN/Hemingway Award is given annually to a full-length novel or book of short stories by an American author who has not previously published a full-length book of fiction. Previous winners include Marilynne Robinson for Housekeeping, Jhumpa Lahiri for Interpreter of Maladies, and Yaa Gyasi for Homegoing.

There There—a kaleidoscopic look at Native American life in Oakland, California, through the experiences and perspectives of 12 characters—has been met with rave reviews since its publication last June and has already won both the Center for Fiction Award for Best First Novel and the National Book Critics Circle John Leonard Award for Best First Book.

Below, you’ll find a selection of the first reviews of this wonderful debut.

“In Tommy Orange’s There There, an ambitious meditation on identity and its broken alternatives, on myth filtered through the lens of time and poverty and urban life, on tradition all the more pressing because of its fragility, it is as if he seeks to reconfigure Oakland as a locus of desire and dreams, to remake the city in the likeness of his large and fascinating set of characters … Orange makes Oakland into a ‘there’ that becomes all the more concretely, emphatically and fully so in a novel that deals, in tones that are sweeping and subtle, large-gestured and nuanced, with what the notion of belonging means for Native Americans … The novel, then, is their picaresque journey, allowing for moments of pure soaring beauty to hit against the most mundane, for a sense of timelessness to be placed right beside a cleareyed version of the here and now, for a sense of vast dispossession to live beside day-to-day misery and poverty. Nothing in Orange’s world is simple, least of all his characters and his sense of the relationship between history and the present. Instead, a great deal is subtle and uncertain in this original and complex novel.”

“Everything about There There acknowledges a brutal legacy of subjugation—and shatters it. Even the book’s challenging structure is a performance of determined resistance. This is a work of fiction, but Orange opens with a white-hot essay. With the glide of a masterful stand-up comic and the depth of a seasoned historian, Orange rifles through our national storehouse of atrocities and slurs, alluding to figures from Col. John Chivington to John Wayne. References that initially seem disjointed soon twine into a rope on which the beads of American hatred are strung … Orange makes little concession to distracted readers, but as the number of characters continues to grow we begin to grasp the web of connections between these people … As these individual stories intersect, the plot accelerates until the novel explodes in a terrifying mess of violence. Technically, it’s a dazzling, cinematic climax played out in quick-cut, rotating points of view. But its greater impact is emotional: a final, sorrowful demonstration of the pathological effects of centuries of abuse and degradation.”

“Tommy Orange’s There There is one of those remarkable debuts that doesn’t come around too often: a groundbreaker. It’s a furious, eloquent, propulsive, multi-voiced portrait … among Orange’s achievements in this powerful, polyphonic, ‘hella sad’ novel is to locate the missing ‘there’—by painting a disturbing but compassionate picture of how historical displacement has reverberated in the lives of a group of descendants of indigenous Americans in contemporary Oakland … With There There, Tommy Orange has certainly done his bit, not only keeping history alive but adding a significant new chapter to Native American literature.”

“There There has so much jangling energy and brings so much news from a distinct corner of American life that it’s a revelation in a way that’s reminiscent of the best of Alexie’s early work. In terms of sheer brio and promise, its appearance marks the passing of a generational baton … The story Orange tells moves cinematically in its second half, sweeping up all that came before. To film it properly would require a Robert Altman, a director with an unorthodox sense of spectacle. It might also require a director willing to tinker with Orange’s expedient Grand Guignol ending, one less willing to simply burn the set down … It’s the close-up work that puts this novel across, however, the quotidian details of blasted lives. That Orange manages to link these details to a historical sense of outrage at how America has treated its native people, in a manner that approaches scarifying essay without dropping over the fence into lecture or sociology, adds to this novel’s smoke … Orange is especially interested in what cultural inheritance means, in how to carry your roots like a conscience, in what one needs to leave behind and what one needs to take … There There has its soft spots. At times it veers toward the sentimental; it can lean too heavily on its themes. There are perhaps too many resonant generalities about the importance of storytelling. But the real stuff is here, a sense of life as it is lived, an awareness of the worm inside each bottle of mezcal.”

“Even if the rest of its story were just so-so—and it’s much more than that—the novel’s prologue would make this book worth reading … In his prologue and in other inspired digressions throughout this novel, Orange’s writing reminds me of the late, great Tom Wolfe—another exuberant, socially conscious prose poet who loved to get word-drunk but never got sloppy … There There is distinguished not only by Orange’s crackling style, but by its unusual subject … There There is pithy and pointed. With a literary authority rare in a debut novel, it places Native American voices front and center before readers’ eyes.”