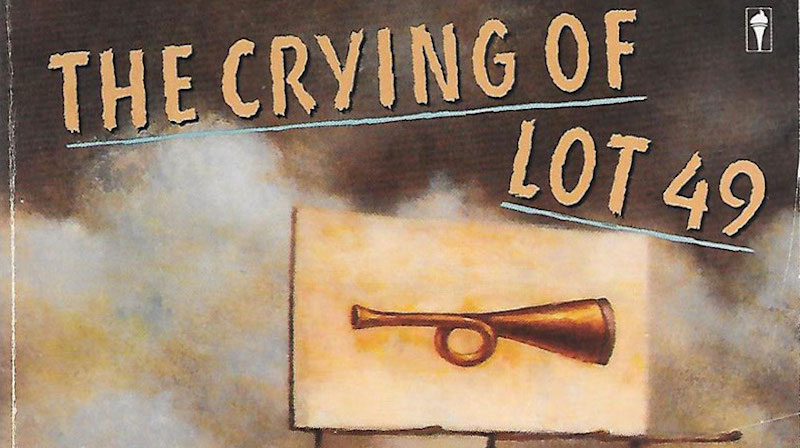 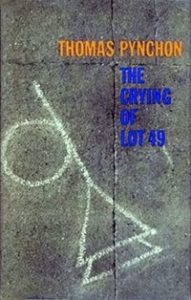 “Shall I project a world?”

“Thomas Pynchon’s second novel, The Crying of Lot 49, reads like an episode withheld from his first, the much-acclaimed V., published three years ago. Pynchon’s technical virtuosity, his adaptations of the apocalyptic-satiric modes of Melville, Conrad, and Joyce, of Faulkner, Nathanael West, and Nabokov, the saturnalian inventiveness he shares with contemporaries like John Barth and Joseph Heller, his security with philosophical and psychological concepts, his anthropological intimacy with the off-beat—these evidences of extraordinary talent in the first novel continue to display themselves in the second. And the uses to which he puts them are very much the same.

“Except for the heroin of V., Rachel Owlglass (she who can see wisely without being a voyeur), and the heroine of this novel, Oedipa Maas—lovable, hapless, decent, eager girls—both novels are populated by self-mystified people running from the responsibilities of love and compelled by phantoms, puzzles, the power of Things. No plot, political, novelistic, or personal, can issue from the circumstances of love, from the simple human needs, say, of a Rachel or an Oedipa, and Pynchon implicitly mocks this situation by the Byzantine complications of plots which do evolve from circumstances devoid of love. 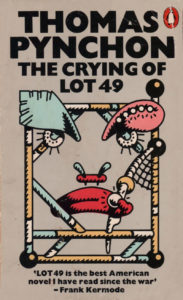 “Gestures of warmth are the more touching in his novels for being terrifyingly intermittent, shy, and worried. The coda of the first novel, enunciated by the jazz player, McClintic Sphere, also serves the second: ‘Love with your mouth shut, help without breaking your ass or publicizing it; keep cool but care.’ This is the stoical resolve of an embattled underground in a world increasingly governed by Ionesco’s rhinoceri, to mention a vision markedly similar to Pynchon’s. Efforts at human communication are lost among Pynchon’s characters, nearly all of whom are obsessed with the presumed cryptography in the chance juxtaposition of Things, in the music and idiom of bars like the V-Note or The Scope, or merely in the ‘vast sprawl of houses’ that Oedipa sees outside Los Angeles, reminding her of the printed circuit of a transistor radio, with its ‘intent to communicate.’

“‘Plots’ are an expression in Pynchon of the mad belief that some plot can ultimately take over the world, can ultimately control life to the point where it is manageably inanimate. And the ascription of ‘plots’ to an opposition is a way of explaining why one’s own have not achieved this ultimate control. Nearly from the outset, the people of Pynchon’s novels are the instruments of the ‘plots’ they help create.

Their consequent dehumanization makes the prospect of an apocalypse and the destruction of self not a horror so much as the finally ecstasy of power. In international relations the ecstasy is war; in human relationships it can be sado-masochism, where skin itself is leather, leather a substitute for skin. The process is a party of daily news, and no other novelist predicts and records it with Pynchon’s imaginative and stylist grasp of contemporary materials. 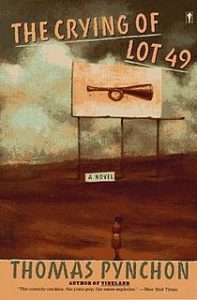 “Between the opening scenes of domesticity and the closing scenes of the ‘crying’ of Lot 49, Oedipa is like the hero in a book of The Faerie Queene, tempted from her human virtues while on a quest that takes her through all manner of seemingly prearranged weirdness and monstrosity, all kinds of foreign ‘systems’ thriving within an America which is itself ‘a grand and so intricate enigma.’ Only the Tristero, imagined as an intricate network of underground organizations, can encapsulate what she would otherwise have to see as the drift of the Republic itself toward ‘the glamorous prospect of annihilation.’

This novel is a patriotic lamentation, an elaborate effort not to believe the worst about the Republic. Patriotism for an ideal of America explains the otherwise yawning gap in Pynchon’s comic shaping of his material. The Tristero System—it began in 1577 in Holland in opposition to the Thurn and Taxis Postal System and is active now in America trying to subvert the American postal system through an organization called W.A.S.T.E.—is a masterpiece of comic invention. It involves, among other things, one of the best parodies ever written of Jacobean drama, The Courier’s Tragedy, and a perhaps final parody of California right-wing organizations, Peter Pequid Society, named for the commanding officer of the Confederate man-of-war ‘Disgruntled’ and opposed to industrial capitalism on the grounds that it has led inevitably to Marxism. Its leader, Mike Fallopian, speculates in California real estate.

The exuberance of such comedy softens the portents of national calamity, but at the same time it makes it nearly impossible for Pynchon to persuade the reader, as he anxiously wants to do, that the whole System and the whole book have more meaning than a practical joke. The same difficulty was apparent in V., where the author’s style at points of sincerity about love and youth was, by contrast to the vitality of his comic writing, platitudinously limp and sloganeering. 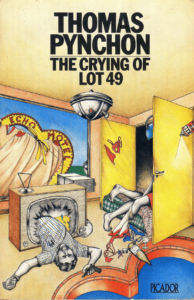 “What I think is happening at the end is that Pynchon desperately needs to magnify the consciousness of his heroine, if he is to validate her encounter with The Tristero System. Only by doing so can he maintain the possibility that the System is distinguishable from the mystery and enigma of America itself. To say that no distinction exists would be to sacrifice the very rationale of his comic reportage: that he is reporting not evidence about American so much as pockets of eccentricity in it, fragments dangerously close to forming a design but fragments nonetheless. Pynchon is reluctant to make all his people submit to the pervasive grotesqueness of American life, though he comes close to that, and he therefore exalts a character altogether too small for the large job given Oedipa at the end.

In fact, Pynchon’s best writing is often in his descriptions of American scenery, of objects rather than persons. He shows at such points a tenderness, largely missing from our literature since Dreiser, for the very physical waste of our yearnings, for the anonymous scrap heap of Things wherein our lives are finally joined. The Pynchon who can write with dashing metaphoric skill about the way humans have become Things, can also reveal a beautiful and heartbreaking reverence for the human penetration of the Thingness of this country, the signatures we make on the grossest evidences of our existence.”