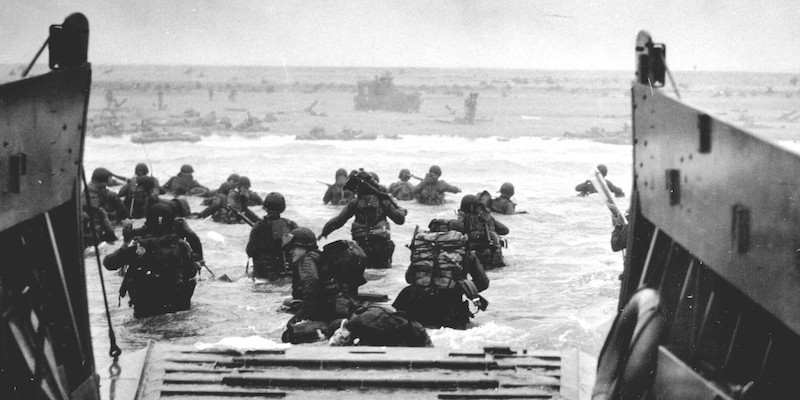 D-Day: The Last Great Set-Piece Battle of the Western World

On the anniversary of the D-Day landings, we look back at Stephen Ambrose's 1994 account of that fateful day 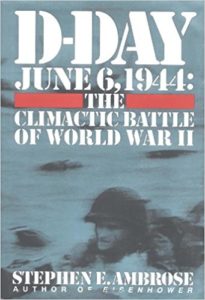 “This embattled shore, portal of freedom, is forever hallowed by the ideals, the valor and the sacrifices of our fellow countrymen.”

“Nearly 10,000 Americans lie in the cemetery near St.-Laurent in Normandy. It is a place of awesome beauty, overlooking one of the five landing beaches of D-Day, code-named Omaha. Here—with a chill in the heart—we get the full impact of what has been called the last great set-piece battle of the Western world, the most thoroughly planned amphibious operation in history. How could anyone have survived on that narrow, crescent-shaped strip, studded with mines and raked by enfilading German machine-gun fire, from virtually indestructible blockhouses? Not of course that all those young men in the cemetery died on that first fatal morning. The Normandy campaign was to last months longer, and 12,000 more bodies were taken home for burial.

As we stand on this now silent spot, we also have to visualize an armada of over 5,000 ships out at sea: battleships, destroyers, mine sweepers, landing craft, merchant ships. Nothing like it had ever been seen before. During and after the landings the battleships, nicknamed Old Ladies, had mercilessly pounded these very cliff-top defenses of Hitler’s so-called Atlantic Wall, as well as 60 miles to the right and left, salvo after salvo, a shrieking inferno. Hundreds of planes had roared overhead, unloading their bombs, shaking the earth. Add to that the crackle of machine guns and the whine and scream of German heavy artillery.

Stephen E. Ambrose acknowledges that The Longest Day, by Cornelius Ryan, was an early inspiration for his new book. Like that account, D-Day, June 6, 1944 is mostly about people, but goes even further in evoking the horror, the endurance, the daring and, indeed, the human failings at Omaha Beach and other places along the Calvados coastline. 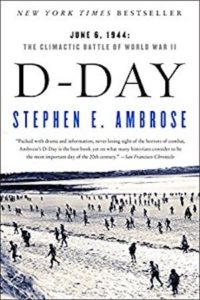 “…the descriptions of individual ordeals on the bloody beach of Omaha make this book outstanding. Some 40,000 men and 3,500 vehicles were scheduled to land there. Almost from the start it was every man for himself. As Eisenhower was to say, before the battle plans are everything, but as soon as battle is joined plans are worthless. That could not have been more true of Omaha. Image after image follows in ever more horrifying succession: men in the first waves already half paralyzed by seasickness, exhaustion and confusion due to unexpectedly vicious German defenses; landing craft overturned, men sinking under too-heavy loads; screams for help, no time to rescue, men drowning or blown to pieces by German shells; limbs and heads floating in the water; machine-gun bullets whipping up the sand ahead; scores of corpses already lying there, vehicles afire; the coxswain yelling at his hesitating passengers, ‘For Christ’s sake, fellas, get out! I’ve got to go get another load!’; a man holding his chin, the bone half shot away, staggering across the shingle. There were some 2,300 casualties at Omaha that day. Sheer force of numbers won through, but only a mile was gained. Gen. Omar Bradley, the principal American ground commander, had even at one stage contemplated withdrawal. 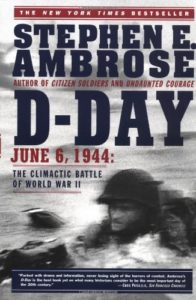 “Mr. Ambrose makes some didactic pronouncements in this book that could cause arguments, demolishing, for instance, the ‘mythical’ qualities of the German fighting soldier. A few remarks about the British are a little irritating to this particular British veteran of those days. Our commanders were indeed haunted by memories of the Somme and Passchendaele, but casualty rates of British units throughout the campaign sometimes equaled or exceeded those of the World War I battles. Perhaps it was true that the British were ‘lousy’ at times when using the fruits of their intelligence gathering, and that when some troops ran low on ammunition they had to surrender.

Such matters aside, Mr. Ambrose wonderfully illuminates the mind of the very young soldier of any nation anywhere who has never been in fighting before. The fear of being afraid. All too soon, ‘It can’t happen to me’ will turn into ‘It can happen to me.’ As an ex-private in the Fifth Rangers remarked to Mr. Ambrose: ‘A veteran infantryman is a terrified infantryman.’ Which explains why most of those who died were between 18 and 28 years old. Mr. Ambrose calls his book ‘a love song to democracy,’ and Eisenhower would certainly have been proud of it, as he was of the words inscribed on the memorial hall at the American Cemetery near St.-Laurent: ‘This embattled shore, portal of freedom, is forever hallowed by the ideals, the valor and the sacrifices of our fellow countrymen.'”