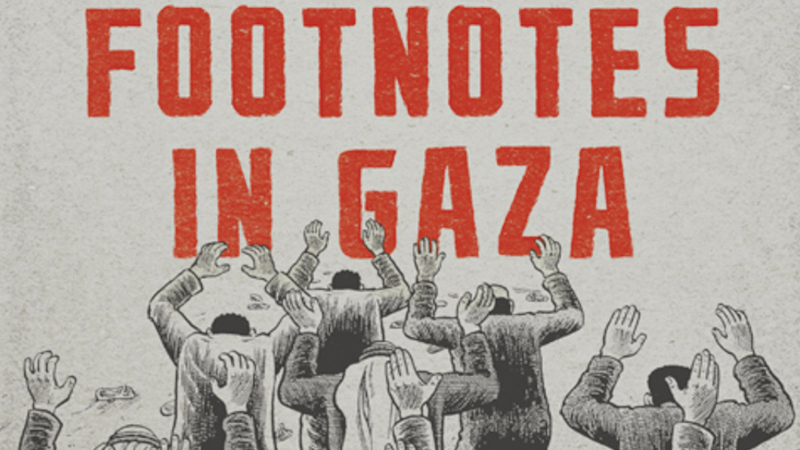 "They planted hatred in our hearts"

A 2009 New York Times review of Footnotes in Gaza, Joe Sacco's quest to uncover the truth about what happened in two Gaza Strip towns in 1956 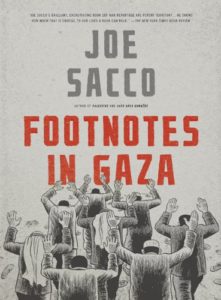 “I’m telling you a story and I am almost crying . . . They planted hatred in our hearts.”

“Joe Sacco’s gripping, important book about two long-forgotten mass killings of Palestinians in Gaza stands out as one of the few contemporary works on the Israeli-Palestinian struggle likely to outlive the era in which they were written.

Sacco will find readers for Footnotes in Gaza far into the future because of the unique format and style of his comic-book narrative. He stands alone as a reporter-cartoonist because his ability to tell a story through his art is combined with investigative reporting of the highest quality.

His subject in this case is two massacres that happened more than half a century ago, stirred up little international attention and were forgotten outside the immediate circle of the victims. The killings took place during the Suez crisis of 1956, when the Israeli Army swept into the Gaza Strip, the great majority of whose inhabitants were Palestinian refugees 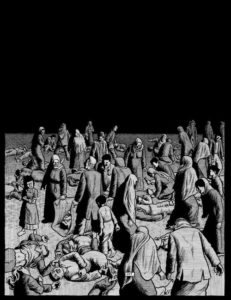 “Sacco makes the excellent point that such episodes are among the true building blocks of history. In this case, accounts of what happened were slow to seep out and were overshadowed by fresh developments in the Suez crisis. Sacco, whose reputation as a reporter-cartoonist was established with Palestine and Safe Area Gorazde, has rescued them from obscurity because they are ‘like innumerable historical tragedies over the ages that barely rate footnote status in the broad sweep of history—even though . . . they often contain the seeds of the grief and anger that shape present-day events.’

“The vividness and pace of Sacco’s drawings, combined with a highly informed and intelligent verbal narrative, work extremely well in telling the story. Indeed, it is difficult to imagine how any other form of journalism could make these events so interesting. Many newspaper or television reporters understand that the roots of today’s crises lie in obscure, unpublicized events. But they also recognize that their news editors are most interested in what is new and are likely to dismiss diversions into history as journalistic self-indulgence liable to bore and confuse the audience. 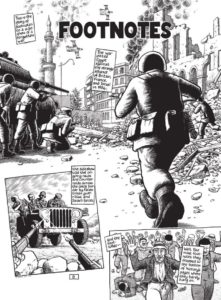 “Sacco’s pursuit of Palestinian and Israeli eyewitnesses as well as Israeli and United Nations documentation is relentless and impressive. He details the lives of those who help him, notably his fixer Abed, and brings to life two eras of the Gaza Strip, its towns packed with refugees in the early 1950s as they are today.

It was an atmosphere filled with hate. Few Israeli leaders showed any empathy for the Palestinian tragedy. But early in 1956, the Israeli chief of staff Moshe Dayan made a famous speech at the funeral of an Israeli commander killed on the border with Gaza. What, Dayan wondered, explained the Palestinians’ ‘terrible hatred of us’? Then he answered his own question: ‘For eight years now they have sat in the refugee camps of Gaza, and have watched how, before their very eyes, we have turned their lands and villages, where they and their forefathers previously dwelled, into our home.’

“Gaza has changed radically since Sacco did his research. In 2005, Israel unilaterally dismantled Jewish settlements and withdrew its military forces, although it remained in tight control of Gaza’s borders. In 2007, Hamas seized control, and in 2008-9 the enclave came under devastating Israeli attack. In this bewildering torrent of events, Sacco’s investigation into the 50-year-old killings is one of the surest guides to the hatred with which Palestinians and Israelis confront one another.”