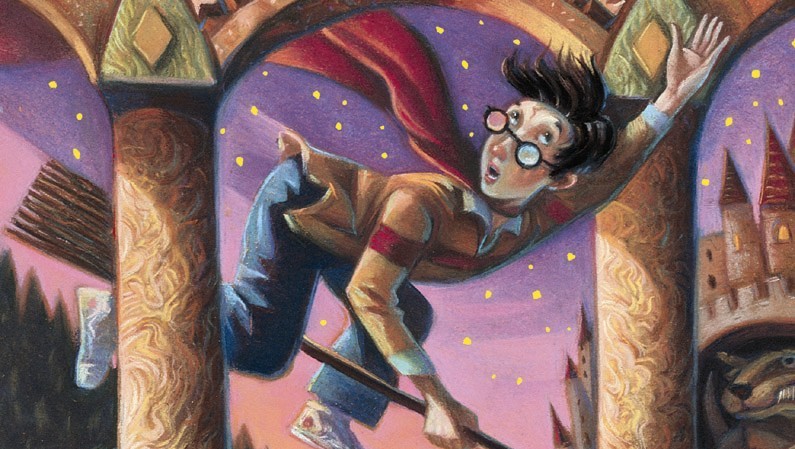 The Wizardry Inside: Harry Potter at 20

20 years on from its publication, we take a look back at J.K. Rowling's first Harry Potter novel 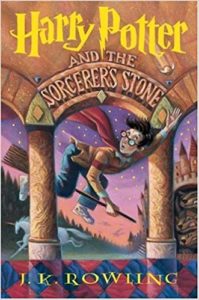 Your mother died to save you. If there is one thing Voldemort cannot understand, it is love. Love as powerful as your mother’s for you leaves it’s own mark. To have been loved so deeply, even though the person who loved us is gone, will give us some protection forever.

“So many of the beloved heroes and heroines of children’s literature—from Cinderella and Snow White to Oliver Twist and the Little Princess to Matilda, Maniac Magee and the great Gilly Hopkins—begin their lives being raised by monstrously wicked, clueless adults, too stupid to see what we the readers know practically from page 1: This is a terrific person we’d love to have for a best friend.

And so it is with Harry Potter, the star of Harry Potter and the Sorcerer’s Stone, by J. K. Rowling, a wonderful first novel from England that won major literary awards and has been at the top of the adult best-seller lists there, and is having the same kind of success here too. Poor Harry Potter is orphaned as a baby and is sent to live with his odious aunt and uncle, Petunia and Vernon Dursley, and their fat son, Dudley. While Fat Dudley Dursley has two bedrooms (one just for his surplus toys, like the television set he put his foot through when his favorite show was canceled), Harry is forced to sleep in a crawl space under the stairs, has never had a birthday party in his 11 years and must wear his cousin’s way baggy hand-me-down clothes.

But Harry is destined for greatness, as we know from the lightning-shaped scar on his forehead, and one day he mysteriously receives a notice in the mail announcing that he has been chosen to attend Hogwarts, the nation’s elite school for training wizards and witches, the Harvard of sorcery. Before he is done, Harry Potter will meet a dragon, make friends with a melancholy centaur and do battle with a three-headed dog; he will learn how to fly a broom and how to use a cloak that makes him invisible. Though all this hocus-pocus is delightful, the magic in the book is not the real magic of the book. Much like Roald Dahl, J. K. Rowling has a gift for keeping the emotions, fears and triumphs of her characters on a human scale, even while the supernatural is popping out all over.

“Throughout most of the book, the characters are impressively three-dimensional (occasionally four-dimensional!) and move along seamlessly through the narrative. However, a few times in the last four chapters, the storytelling begins to sputter, and there are twists I found irritating and contrived. To serve the plot, characters begin behaving out of character. Most noticeably, Hagrid, the gentle giant of a groundskeeper who has selflessly protected Harry over and over, suddenly turns so selfish he is willing to let Harry be punished for something that is Hagrid’s fault. That’s not the Hagrid I’d come to know.

These are minor criticisms. On the whole, Harry Potter and the Sorcerer’s Stone is as funny, moving and impressive as the story behind its writing. J. K. Rowling, a teacher by training, was a 30-year-old single mother living on welfare in a cold one-bedroom flat in Edinburgh when she began writing it in longhand during her baby daughter’s nap times. But like Harry Potter, she had wizardry inside, and has soared beyond her modest Muggle surroundings to achieve something quite special.” 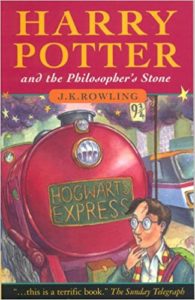 “Readers are in for a delightful romp with this award-winning debut from a British author who dances in the footsteps of P.L. Travers and Roald Dahl. As the story opens, mysterious goings-on ruffle the self-satisfied suburban world of the Dursleys, culminating in a trio of strangers depositing the Dursleys’ infant nephew Harry in a basket on their doorstep. After 11 years of disregard and neglect at the hands of his aunt, uncle and their swinish son Dudley, Harry suddenly receives a visit from a giant named Hagrid, who informs Harry that his mother and father were a witch and a wizard, and that he is to attend Hogwarts School of Witchcraft and Wizardry himself. Most surprising of all, Harry is a legend in the witch world for having survived an attack by the evil sorcerer Voldemort, who killed his parents and left Harry with a lightning-shaped scar on his forehead. And so the fun begins, with Harry going off to boarding school like a typical English kid—only his supplies include a message-carrying owl and a magic wand. There is enchantment, suspense and danger galore (as well as enough creepy creatures to satisfy the most bogeymen-loving readers, and even a magical game of soccerlike Quidditch to entertain sports fans) as Harry and his friends Ron and Hermione plumb the secrets of the forbidden third floor at Hogwarts to battle evil and unravel the mystery behind Harry’s scar. Rowling leaves the door wide open for a sequel; bedazzled readers will surely clamor for one.” 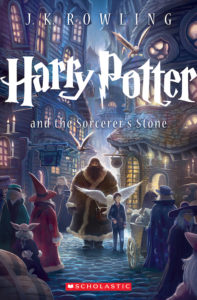 “In a rousing first novel, already an award-winner in England, Harry is just a baby when his magical parents are done in by Voldemort, a wizard so dastardly other wizards are scared to mention his name. So Harry is brought up by his mean Uncle Vernon and Aunt Petunia Dursley, and picked on by his horrid cousin Dudley. He knows nothing about his magical birthright until ten years later, when he learns he’s to attend Hogwarts School of Witchcraft and Wizardry. Hogwarts is a lot like English boarding school, except that instead of classes in math and grammar, the curriculum features courses in Transfiguration, Herbology, and Defense Against the Dark Arts. Harry becomes the star player of Quidditch, a sort of mid-air ball game. With the help of his new friends Ron and Hermione, Harry solves a mystery involving a sorcerer’s stone that ultimately takes him to the evil Voldemort. This hugely enjoyable fantasy is filled with imaginative details, from oddly flavored jelly beans to dragons’ eggs hatched on the hearth. It’s slanted toward action-oriented readers, who will find that Briticisms meld with all the other wonders of magic school.” 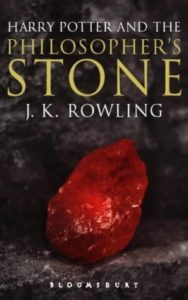 “Orphaned in infancy, Harry Potter is raised by reluctant parents, Aunt Petunia and Uncle Vernon, an odious couple who would be right at home in a Roald Dahl novel. Things go from awful to hideous for Harry until, with the approach of his eleventh birthday, mysterious letters begin arriving addressed to him! His aunt and uncle manage to intercept these until a giant named Hagrid delivers one in person, and to his astonishment, Harry learns that he is a wizard and has been accepted (without even applying) as a student at Hogwarts School of Witchcraft and Wizardry. There’s even more startling news: it turns out that his parents were killed by an evil wizard so powerful that everyone is afraid to so much as utter his name, Voldemort. Somehow, though, Harry survived Voldemort’s attempt to kill him, too, though it has left him with a lightning-shaped scar on his forehead and enormous celebrity in the world of magic, because Voldemort vanished following his failure. But is he gone for good? What is hidden on the third floor of Hogwarts Castle? And who is the Man with Two Faces? Rowling’s first novel, which has won numerous prizes in England, is a brilliantly imagined and beautifully written fantasy that incorporates elements of traditional British school stories without once violating the magical underpinnings of the plot. In fact, Rowling’s wonderful ability to put a fantastic spin on sports, student rivalry, and eccentric faculty contributes to the humor, charm, and, well, delight of her utterly captivating story.”