On the tenth anniversary of his death, we look back at a 1963 New York Times review of Vonnegut's forth novel 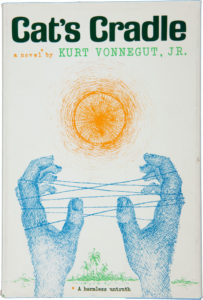 How complicated and unpredictable the machinery of life really is.

“The narrator of Cat’s Cradle purports to be engaged in compiling a responsibly factual account of what certain interested Americans were doing at the precise moment the atomic bomb was dropped on Hiroshima. Through correspondence with the three children of the late Felix Hoenikker, Nobel Prize winner and so-called ‘father of the atomic bomb,’ he evolves a portrait of the man in relation to his family and the community.

We learn that at the eventful moment in question Dr. Hoenikker was, in fact, ‘playing with a bit of string,’ having made of it a ‘cat’s cradle’–and that his youngest son, to whom he had never previously spoken, was frightened when Dad came up to him, jerking the string back and forth, saying: ‘See the cat! See the cradle!’ 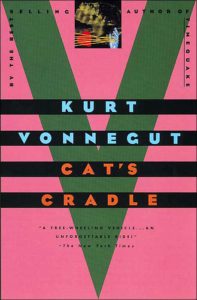 We further learn that on the night of his death, years later, he was again ‘playing around’–in the kitchen this time, with some water and bits of ice. With his characteristically pure-science approach (‘Why doesn’t someone do something about mud?’ the Marine Corps general had asked him) he has isolated crystals of ice in such a way that water can now be caused to freeze at a relatively high temperature. ‘Ice-9’ it is called. The family dog laps at a bowl of water which has been touched with a piece of Ice-9 and is promptly frozen stiff. The Hoenikker children carefully divide this last gift to mankind from Dr. Hoenikker.

Following the doctor’s death, the story devotes itself to what happens to the three children and to Ice-9. Frank, the eldest, has become the right-hand man of Manzano, the President of a Caribbean island. The daughter and the younger brother visit the island to celebrate the forthcoming marriage of Frank to the regional sex-goddess; we soon learn that he has bought his position of power with a piece of Ice-9–which President Manzano then uses to commit suicide, thereupon naming Frank his successor.

Frank declines the responsibility and offers the post to the narrator. As the two of them try discreetly to dispose of the President’s frozen corpse, the narrator realizes how extensive the spread and acquisition of Ice-9 has become. The younger brother, Newt, a midget, has exchanged his share for a few mad nights with a Russian circus performer, also a midget. The unmarriageable daughter, a six-foot bean-poler, has used hers to buy a handsome physicist. Finally events reach their inevitable conclusion–the freezing of all the earth’s waters, and life itself.

Cat’s Cradle is an irreverent and often highly entertaining fantasy concerning the playful irresponsibility of nuclear scientists. Like the best of contemporary satire, it is work of a far more engaging and meaningful order than the melodramatic tripe which most critics seem to consider ‘serious.'”