The Times that Try Men's Souls:
On David McCullough's 1776 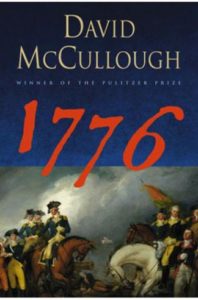 There are no people on earth in whom a spirit of enthusiastic zeal is so readily kindled,

and burns so remarkably, as Americans

“This is a sly book, beginning with its title, 1776. It’s a story of war, not words—the great declaration in Philadelphia occurs offstage. Yet no combat takes place for most of the narrative. George Washington often pales beside his supporting cast, and readers are invited to empathize with traditionally reviled figures: Tories, Hessian mercenaries, even King George III.

Another surprise is that David McCullough, best known for Rushmore-size biographies of underrated presidents, wrestles America’s founding year into a taut 294 pages of text, describing the trying months that followed the heroics at Lexington, Concord and the Battle of Bunker Hill. The result is a lucid and lively work that will engage both Revolutionary War bores and general readers who have avoided the subject since their school days. 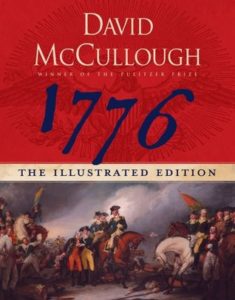 “McCullough deftly sketches characters with a few quotations and details, humanizing a cast of thousands. In Massachusetts, we meet Washington’s idiosyncratic staff, including Nathanael Greene, a Quaker foundryman and limping asthmatic with one eye clouded by a smallpox inoculation. Charles Lee, Washington’s second-in-command, is described by a contemporary as a ‘great sloven, wretchedly profane,’ and so ill tempered that ‘his Indian name was Boiling Water.’

McCullough writes with obvious warmth about flinty New Englanders. His portrait of the Virginian who led them is much more ambivalent. Washington emerges as courageous, indefatigable, a born leader, a military bumbler and a patrician whose trappings rivaled those of the English gentry. Fighting for the ‘glorious Cause’ of liberty and equality, ‘His Excellency’ quartered himself in the finest manses of Cambridge and Manhattan, with slaves, a French cook and a tailor in tow. Frustrated by his inability to discipline Yankee troops, he micromanaged the expansion of Mount Vernon from afar, fretting about parlor wainscoting on the eve of battle.

More gravely, Washington didn’t have a clue about strategy or tactics, and had to be rescued from his reckless plans by subordinates. McCullough bluntly terms him ‘indecisive and inept’ as a battle commander, but praises his perseverance and cleareyed recognition of his own and his army’s faults. Washington also showed a talent for night actions (often in retreat) and a capacity to learn from his mistakes. 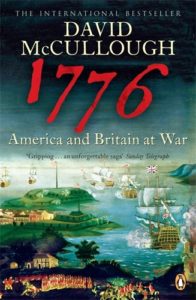 “In 1776, as in John Adams, McCullough vividly evokes the rustic ingenuity of 18th-century colonial life. Rebels encircling Boston cloaked their advance with hay bales, and fortified their hilltop redoubt with barrels of stone and sand to roll down on the British. Soldiers lacking muskets ‘carried homemade pikes fashioned from scythe blades.’ Washington’s famed Delaware crossing was made aboard barges designed to float pig iron.

1776 is least effective, however, at conveying the core of most war stories: combat. The first, and best, hundred pages center on the siege of Boston, a tense but almost bloodless affair. When the action shifts to New York, the narrative slackens. McCullough writes with great clarity about the complex maneuvers between Manhattan, Long Island and Westchester County in the summer and fall of 1776. But when battle erupts, the action becomes mired in stock images.

That a storyteller as versatile as McCullough can’t enliven colonial combat raises a larger question. The War of Independence killed a greater percentage of Americans than any other conflict in our history, except the Civil War. The stakes could hardly have been higher. Yet Revolutionary War battle seems stubbornly to defy dramatization, in film as well as print. Are we numbed by the parades and rote patriotism of the Fourth of July? Anesthetized by textbooks, which turn the Revolution into a wonkish debate over taxes and governance? Whatever the reason, America’s seminal war has yet to find its Stephen Crane, Margaret Mitchell or Shelby Foote.

1776 is nonetheless a stirring and timely work, reminding us that it’s soldiers rather than ‘tavern patriots and windy politicians’ who have always paid the price of American idealism and determined its successes. One of the first to recognize this was Thomas Paine, whose famous words—’These are the times that try men’s souls’—were inspired by the sight of Washington’s frayed army in retreat. Washington’s closest aide, Joseph Reed, put it more plainly in a letter to his wife. ‘Your noisy sons of liberty are, I find, the quietest in the field,’ he wrote. ‘An engagement, or even the expectation of one, gives a wonderful insight into character.'”