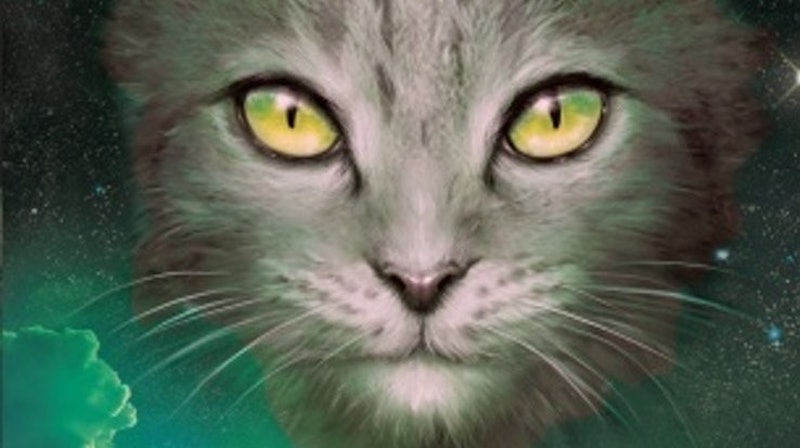 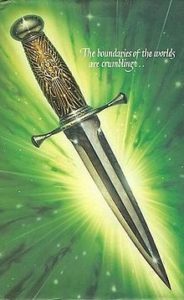 “In a high fantasy trilogy, the first book is usually a Baedeker to a brave new world and its regulation-issue mortal conflict. The third book reveals secret identities, reverses what seemed irreversible and resolves the conflict. But the second book is prone to middle book syndrome, a parlous condition characterized by too much development and too little resolution.

His Dark Materials, by the English novelist Philip Pullman, is the latest trilogy to step up the pulse of kids and adults alike. The first installment, The Golden Compass, was received with hallelujahs and literary prizes, including Britain’s Carnegie Medal. Now we have The Subtle Knife. Though this second volume almost succumbs to middle book syndrome, Pullman, who has written many other books for children and adults, avoids it, adroitly, by force of theme. 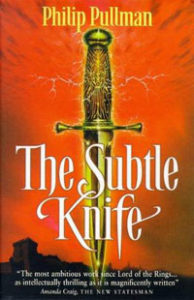 ”The Subtle Knife nears magnificence in the loftiness of its moral design. The ‘high’ in high fantasy, in this instance, refers to the high heavens. Lyra’s father, Lord Asriel, a figure of apparent majesty, is building a fortress in the frozen north from which to launch an attack upon the ‘Authority.’ Young readers will not know that in Paradise Lost the rebel angel, Satan, repaired to the northern realms, nor will they have any sense of the terrible glory of Milton’s characterization. But they will respond to the portrayal of the totalitarian church of this parallel world. The witch queen says, ‘Every church is the same: control, destroy, obliterate every good feeling.’ Is Lord Asriel’s to be a battle with a tyrannical God or with a corrupt human institution?

By the end of The Subtle Knife there is little clarity about which side, if any, is good and deserves to prevail. Except, of course, this is a children’s book, and so the child heroes deserve to prevail. This being a middle book, alas, prevail is just what these brave kids can’t manage to do—yet. 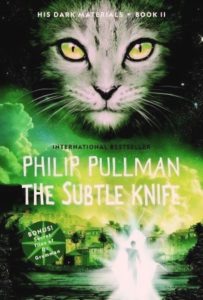 “Children will read The Subtle Knife as an adventure story rather than as an extended riff on liberty and free will derived from Books 5 and 6 of Paradise Lost. And adventure is abundant: cowboy shootouts, exploding dirigibles, break-ins at English country homes, tortures and assassinations, communication with spirits on computer monitors. The story gallops with such ferocious momentum that one almost forgives such cliffhangers as watching Mary Malone, a former nun turned Oxford scientist, disappear through a window into a new world, never to be heard from again—yet.

Still, the strongest characterization is in Will.

Will: intentionality, force. Neither bookishly wise nor cutting-edge hip, the boy is fiercely protective of his beleaguered mother, capable of violence in the good fight. And The Subtle Knife succeeds most resonantly in reminding us that some fights are good fights. 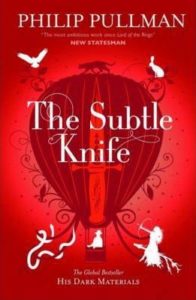 “Children still need heroes. It’s nice to see a girl who can discern the truth through a golden compass, and a boy able to slice spirit and matter with an atom-carving subtle knife. Up against heaven itself, if need be. But then what? Are Lyra and Will to be the next Adam and Eve, repopulating a fresh Eden with new, improved humans? If so, among their offspring there will be some children who will ignore paradise itself in search of the arresting strangeness of another good fantasy trilogy to read. Put Philip Pullman on the shelf with Ursula K. Le Guin, Susan Cooper, Lloyd Alexander, at least until we get to see Volume 3.”