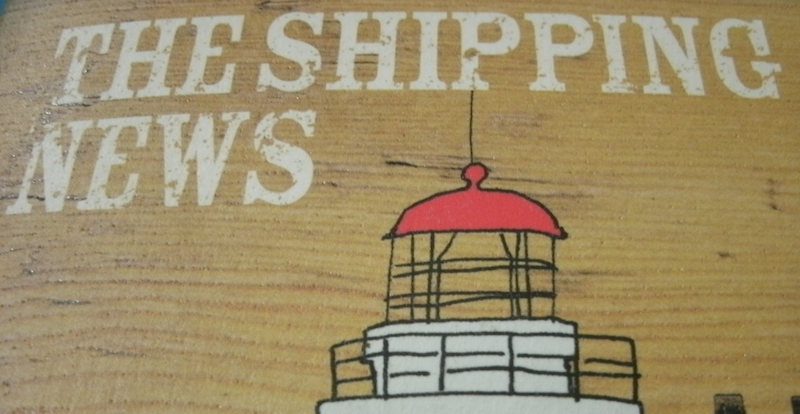 The "strange foibles of humanity" in Annie Proulx's The Shipping News 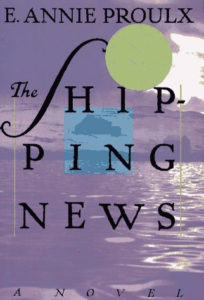 We’re all strange inside. We learn how to disguise our differences as we grow up.

“An early traveler’s account of the Maritime Provinces says, ‘After but a year’s visit, one is convinced that the sea has a savage appetite for Newfoundlanders.’ In E. Annie Proulx’s vigorous, quirky novel The Shipping News, set in present-day Newfoundland, there are indeed a lot of drownings. The main characters are plagued by dangerous undercurrents, both in the physical world and in their own minds. But the local color, ribaldry and uncanny sorts of redemption of Ms. Proulx’s third book of fiction keep the reader from slipping under, into the murk of loss. The novel, largely set in the village of Killick-Claw, along Newfoundland’s foggy, storm-battered coast, displays Ms. Proulx’s surreal humor and her zest for the strange foibles of humanity.

The protagonist is Quoyle, who almost drowns once. Back in New York State, his marriage to Petal Bear had ‘a month of fiery happiness. Then six kinked years of suffering.’ Quoyle, however, was smitten to the end. When Petal is killed with a lover in a car wreck, one of Quoyle’s first acts of mourning is to stick his head into the sudden cold weather of the refrigerator to cry. Quoyle, a third-rate newspaper hack with a ‘head shaped like a crenshaw, no neck, reddish hair’ and ‘features as bunched as kissed fingertips,’ is left with two daughters, Bunny and Sunshine, ages 6 and 4 1/2. Soon Bunny is plagued with nightmares (of a snarling white dog) that match in intensity her father’s hallucinatory re-enactments of Petal’s grisly death. Life seems stripped of hope until Quoyle’s Aunt Agnis Hamm arrives. The aunt, as she is often referred to, regales Quoyle with stories of their Newfoundland ancestors; at once mesmerizing and disquieting, they draw Quoyle in, albeit with some hesitation. 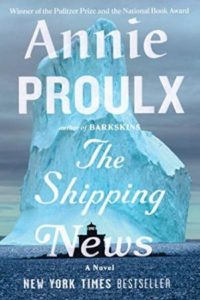 “Claustrophobic winter arrives, locking in Killick-Claw, icing over the coves. As the harsh months go by, it seems that Quoyle is digging out from his own past. He deals compassionately with the last of his disreputable clan, a demented old cousin living in a hut ‘crammed with the poverty of another century,’ by securing him in a rest home. Still fending off visions of Petal, he begins to court the all but silent Wavey Prowse, herself widowed by a drowning. He gets his children ensconced in school and deepens his knowledge and delight as a father. He seems for the first time calm in his heart. The children and aunt undergo difficult, healing transformations as well. Our sympathies are strongly invested in all of them, as well as in the village itself.

Throughout The Shipping News, the sinuousness of E. Annie Proulx’s prose seems to correspond physically with the textures of the weather and sea. Her inventive language is finely, if exhaustively, accomplished. If I have any complaint it is that at times she carries her own brand of poetic compression too far: ‘Billy’s worn shape down to the bones, cast Quoyle as a sliding mass.’ Weather offshore or overland can often seem chokingly imbued with portentousness. Near the novel’s end, Jack Buggit sits up in his own coffin, spouting water, having both drowned and not drowned; it is a forced invention in a novel otherwise replete with wonderfully natural ones.

“Ms. Proulx is never too showy with her research, though The Shipping News is almost an encyclopedia of slang and lore. The way her Newfoundlanders talk, the most factual account seems as high-spirited as gossip over a supper of snow crab, cod cheeks, lobster salad and seal-flipper stew.

Eventually, the actual house of Quoyle is blown into the sea, a drowned house. Yet by spring’s open water, Quoyle himself has not only survived but also drummed out some of his demons. In the end, it seems triumph enough that neither Quoyle nor Wavey has drowned.”