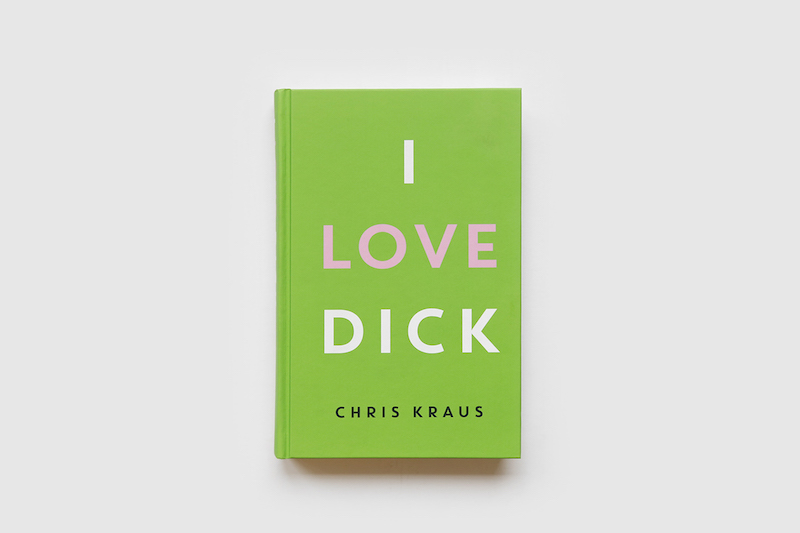 The Riveting Psychic Vomiting of Chris Kraus' I Love Dick 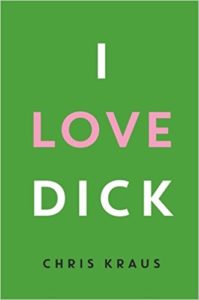 It’s better than sex. Reading delivers on the promise that sex raises but hardly ever can fulfill — getting larger cause you’re entering another person’s language, cadence, heart and mind.

“Chris Kraus’ ‘novel’ is a book not so much written as secreted. One is inescapably reminded of Capote’s put-down of Kerouac: that it was typing, not writing. But typing can be used to interesting literary effect. Psychic vomiting and a flat prose style shot through with banal dialogue are staples of a certain kind of ‘experimental’ ecriture, a style particularly appealing to wannabe bad boys (and girls) for its supposed rawness and lack of literary affectation. With I Love Dick, however, that lack of obvious literariness perfectly suits Kraus’ exhibitionism and her readers’ voyeurism. Masquerading as a novel – perhaps for legal reasons – I Love Dick is an account of Kraus’ infatuation with Dick Hebdige, author of Subculture, The Meaning of Style. Her husband Sylvere Lotringer plays a big part too, even to the extent of authoring segments of Kraus’ text. There is nothing veiled or a clef about this: we’re talking full disclosure, with real names, dates, places, diary entries, correspondence, transcriptions of telephone answering machine messages, etc. Arguably a highly self-conscious, painstakingly written experimental novel, the book reads like straight spillage, as if Kraus were simply telling her story and sharing her ideas with her husband, her friends, her analyst, anyone who will listen. Maybe she’s just talking to herself. 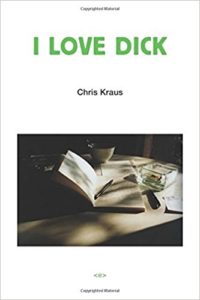 “It is unexpectedly riveting. Why? Well, in large measure because of Kraus’ unbelievable gall, her hubris in sweeping very unflattering details of other people’s intimate lives into her own work, without recourse to the usual fictionalizing cake-frosting. In all fairness, Kraus doesn’t prettify herself either. She comes off as a major piece of work. The premise is crazy: Kraus met Hebdige with her husband, instantly fell in love with him, never even screwed him, and then doggedly pursued him, after a fashion. Even as she pursues him, distantly, she has her eye on the situation’s potential as a kind of pomo performance piece. She and Sylvere wrote Dick many letters, most of which went unsent. I don’t believe she was ever in love, and it certainly wasn’t a sex thing, despite Kraus’ protestations of magnetic attraction. Kraus refers to Hebdige as ‘the Cowboy,’ an unlikely epithet for a middle-aged British cultural studies guy. The whole thing reeks of a setup: Kraus willed or pretended to will herself into this state of amour fou just so she would have the requisite raw materials for her writing experiment. It’s actually not such a bad idea for generating a story. The mantra of tyro writers is to write what you know. But what if you don’t know anything interesting? What if your own life is dull? Then, create life experiences with the deliberate intention of using them as future art experiences. For example: Get hooked on Prozac and write about it. Sleep with your father and write about it. 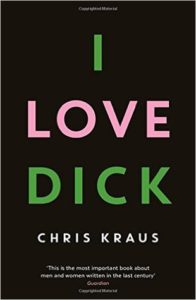 “Part I of Kraus’ book is called ‘Scenes from a Marriage.’ Dick is mostly a figment, she and her husband are the real characters. Part II gets even more meta, spinning into feminist musings and tirades, anecdotal accounts of New York bohemia, an essay in art criticism, etc., all of which is wrapped up in Kraus’ continued fixation (I hesitate to say crush) on Dick. Often it reads as Kraus’ explanation of what she’s done to Dick: ‘Isn’t the greatest freedom in the world the freedom to be wrong? What hooks me on our story is our different readings of it. You think it’s personal and private; my neurosis. ‘The greatest secret in the world is, THERE IS NO SECRET’ – Clare Parnet and Gilles Deleuze. I think our story is performative philosophy.’ Maybe I Love Dick is a novel after all; so much of it is ‘made up’: made up of fantasies, speculations, wishes, and recriminations. 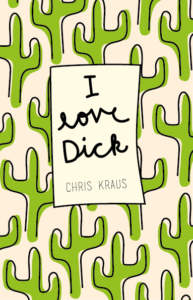 “Late in the book, Kraus recounts a story that suggests she and Dick did have sex, but it still reads as both unlikely and unverifiable, part of Kraus’ head trip, her project. Dick himself scarcely ever gets to speak. He’s limited to awkward walk-ons, a few mumbled phrases. But that’s because he refuses to play along. At the very end of her story, Kraus appends a letter written from Dick to Sylvere: ‘I can only say that being taken as the objective of such obsessive attention on the basis of two genial but not particularly intimate or remarkable meetings over a period of years was, indeed still is, utterly incomprehensible to me. I found the situation initially perplexing, then disturbing and my major regret now is that I didn’t find the courage at the time to communicate to you and Kris how uncomfortable I felt being the unwitting object of what you described to me over the phone before Christmas as some kind of bizarre game.'”