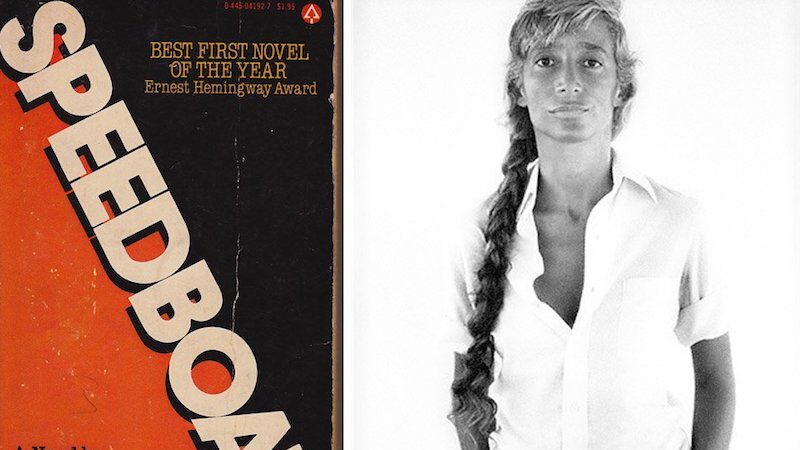 The Momentum of Last Resort: On Renata Adler's Speedboat 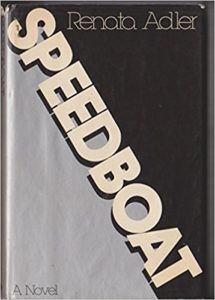 I think when you are truly stuck, when you have stood still in the same spot for too long, you throw a grenade in exactly the spot you were standing in, and jump, and pray.

It is the momentum of last resort.

“Certainly Speedboat makes no concession to any craving—vulgar or sophisticated—for an engrossing narrative. Furthermore, though concerned fleetingly with motivations, Speedboat avoids the sustained psychological rendering of character as rigorously as the novels of Robbe?Grillet, but without attempting their quasi?musical purity as linguistic constructs. The book does have an emotional impact—a strong one—but one that derives more from a painfully exact transcription of the life many of us lead than from the creation of a powerfully imagined fictional world. From almost any approach one chooses to take, Speedboat is a non?novel.

Yet it is a very good book elegantly written, often funny, vivid in its presentation of the absurdities, the small and great horrors, the boobytraps with which our daily existence is strewn. Essentially it is a collage, an assemblage of tiny anecdotes, vignettes, overheard conversations, aphorisms and reflections. These bits and pieces—many of them the verbal equivalent of found objects—are shaped for us by the sensibility of a highly intelligent, vulnerable woman in her mid?thirties—a woman whose name we barely know. She is revealed —fragmentarily—as an upper?middleclass graduate of a progressive school and a good women’s college who has been variously a student in Paris (structural anthropology), a graduate student in England (linguistic philosophy?). a traveler to islands in the Mediterranean and the Caribbean, brownstone dweller, a writer of political speeches, a teacher in a dismal branch of the City University, a consumer of Valium, a reporter for a tabloid paper. Above all, a reporter. She has affairs with shadowy males named Aldo, Will and Jim; toward the end of the last section we learn that she is pregnant by Jim and that Jim is unaware of the fact.

But all this suggests more of a story than Speedboat really contains. The book’s compelling interest comes from the way the narrator reports and reflects upon the phenomena that fall within the range of her edgy and perplexed sensibility. 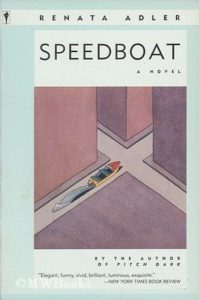 “It is the experience of living in New York—far more than the forays into Mississippi in the 1960’s, the Fulbright years in Europe, the escapes to sunny islands—that has had the greatest impact on the narrator and her particular set. Speedboat is a quintessentially ‘New York’ book with its radical?chic parties, conversations with analysts, late?hour excursions to Elaine’s, its encounters with rats, cabdrivers, earlymorning stealers of the neighbor’s Sunday Times, dubious loiterers, doorstep winos, glibly illiterate City University students and a girl who had to steal two blouses from Bloomingdale’s because she had no time to wait. Paranoia is a natural but rejected response to this existence.

“Though Miss Adler is a realist in miniature, the cumulative effect of her book is dizzyingly surrealistic—and to my mind the impact is far greater than the deliberate, though perfunctory, surrealism to which so many contemporary ‘serious’ novelists resort. In the presentation and analysis of her specimens Renate Adler is an exquisite craftsman. Her style is luminously exact, subtle in its rhythms, capable of both concrete immediacy and arresting generalizations. 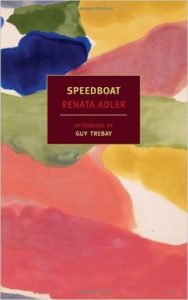 “Unlike the products of the French New Novelists—or what Gore Vidal has recently called the ‘plastic fiction’ of their American disciples—Speedboat is neither boring nor dehumanized. Though paragraph by paragraph the book is entertaining and often brilliant, it can, because of its density and lack of narrative propulsion, have a clogging effect if subjected to too sustained a reading. For its maximum effect it should, I think, be read one section at a sitting, with frequent pauses for rereading. Perhaps the best advice for enjoying Speedboat was given 204 years ago by Samuel Johnson in defending the founder of the psychological novel, Samuel Richardson, against the charge of tediousness. ‘Why, Sir,’ said Johnson, ‘if you were to read Richardson for the story, your impatience would be so much fretted that you would hang yourself. But you must read him for the sentiment.’ Substitute ‘sensibility’ (that other key term of the 18th century) for ‘sentiment’ and there you have it.”