The Long Walk Home:Cold Mountain at 20

Two decades on from its publication, we look back at Charles Frazier's National Book Award-winning epic of love and war 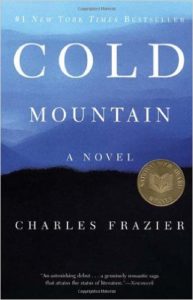 …for you can grieve your heart out and in the end you are still where you were. All your grief hasn’t changed a thing. What you have lost will not be returned to you. It will always be lost. You’re only left with your scars to mark the void. All you can choose to do is go on or not. But if you go on, it’s knowing you carry your scars with you.

“Charles Frazier’s own feeling for the Southern landscape is reverential and beautifully composed. He has written an astonishing first novel, if that is what it is. All the publisher tells us about Frazier is that he raises horses in North Carolina, and that the story is based on the long walk home of a great-greatgrandfather. The prose is so silky and arch in capturing the stiff speech of the period that the book must have had much unpublished work behind it. This gift of composition holds up a tale that tries to get past all the guilt and cruelty of the slave republic by directing the only real love in the book to the land itself. Inman, weary of everything about the war and for a brief moment thinking himself out of it, wonders, ‘What would be the cost of not having an enemy? Who could you strike for retribution other than yourself?’

“All this documentary is charming because of Frazier’s feeling for the smallest side of rural life. But it is also clearly drawn out to keep the reader in suspense. When if ever will the separated lovers ever get together, as Inman on the road, Ulysses-like, has to get past one difficulty after another? Ruby, on hearing the story of Homer’s Odyssey, comments that Ulysses was evidently not in a hurry to get back to Ithaca. Inman is hurrying to Ada as best he can. But of course terrible Teague, whose menace continually hangs over the story, catches up with Inman not once but twice. The first time Inman, lined up with others to be shot, is merely grazed by the bullet and gets away. The second time confers tragedy upon the love story—a tragedy imminent throughout the telling of the story. This clearly expresses Frazier’s own sorrow—the noblest feature of the book—over the fate of the South and the devastation of so many Southerners.

There is a lot of sorrow here. Frazier, for all his love of country, his country, knows this is not enough and cunningly draws on the kind of rough old Southern humor that Mark Twain knew by heart but had to hold back even in Huckleberry Finn.” 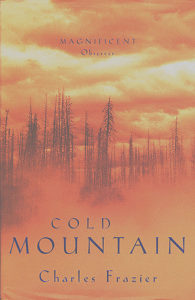 “Novelists are never in short supply. Natural-born storytellers come along only rarely. Charles Frazier joins the ranks of that elite cadre on the first page of his astonishing debut, Cold Mountain.

Frazier based his family stories told Inman, the author’s grandfather, who deserted in the midst of the Civil War and walked home. Around that armature he wraps a narrative that is equal parts adventure yarn, war novel and love story. Those elements have been the ingredients of many a potboiler, but no hack ever dreamed up a protagonist like Inman. The horrors of war have hollowed him out, leaving him to ponder how ‘a man’s spirit could be torn apart and cease and yet his body keep on living.’ Two things keep him going: the thought of Ada Monroe, an unapproachable beauty for whom he’d fallen before the war, and the memory of Cold Mountain. For Inman, this peak looming over his home symbolizes all that’s right with the world, ‘a place where all his scattered forces might gather.’

“Frazier’s descriptions of farmwork and animals are the work of a man with firsthand knowledge, and it is no surprise to discover that the 46-year-old author raises horses for a living. But where he learned to conjure war’s horror with a poet’s economy (‘the mere existence of the Henry repeating rifle or the eprouvette mortar made all talk of spirit immediately antique’) is anyone’s guess.

The pleasure of Frazier’s language—forceful and perfectly cadenced to capture the flavor of a long-gone era—is merely a side dish. Inman’s trek and Ada’s struggle to manage a small mountain farm are told in alternating chapters. As these narratives converge, their yearning for each other grows more intense, and so does our suspense. The genuinely romantic saga of Ada and Inman is a page turner that attains the status of literature.” 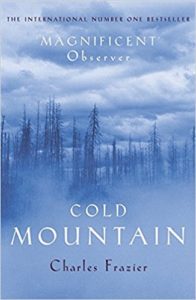 “For a first novelist, in fact for any novelist, Charles Frazier has taken on a daunting task—and has done extraordinarily well by it. In prose filled with grace notes and trenchant asides, he has reset much of the Odyssey in 19th-century America, near the end of the Civil War.

Although too much can be made of the Homeric parallels, they are obvious, and they echo through the narrative. The author’s Ithaca lies deep within the Carolina mountains and is the elusive goal of his Odysseus, a wounded Confederate veteran named Inman who ‘had seen so much death it had come to seem a random thing entirely.’ Because it had, he resolves to reclaim himself and his humanity by fleeing the hospital where he is recovering, returning to his home and to Ada, his Penelope, whom he intends to make his wife.

“…both of Frazier’s characters are between their pasts and their futures, escaping the former and traveling toward the latter. Although Inman’s journey (which, he tells himself, ‘will be the axle of my life’) covers more physical distance and has more immediate drama, Ada’s is richer and deeper; in the end, perhaps it is she who travels farther.

Setting out armed with a pistol and a tattered copy of the 18th-century naturalist William Bartram’s Travels, Inman takes leave of a ‘country of swill and sullage, sump of the continent,’ and heads off into the new sunrise of his life. Along the way, he encounters wonders and deadly threats that, while of less mythological weight than the trials of Odysseus, carry mystical overtones that are particularly American.

“A wealth of finely realized supporting characters gives Frazier’s novel a subtext of richness and subtlety. The account of the reclamation of Ruby’s layabout father, the drunkard Stobrod, through music and the fiddle, for instance, is memorable and inspired. Yet however strongly the side issues resonate, they are never allowed to interfere with the main thrust of the plot. The author’s focus is always on Ada and Inman. It is their movement toward each other that always remains central, and that finally makes Cold Mountain such a memorable book.”