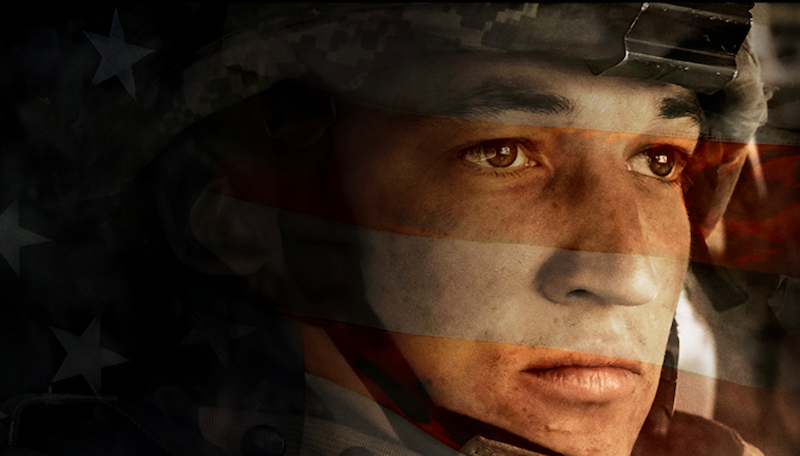 The Haunted Soldiers of David Finkel's Thank You For Your Service

A 2013 New York Times review of Finkel's acclaimed, recently-adapted account of the psychological struggles of returning US soldiers 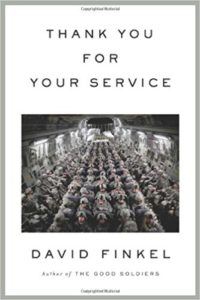 Everywhere on this day, the after-war continues, as eternally as war itself

“Several years ago David Finkel, a reporter for The Washington Post and a 2012 MacArthur fellow, wrote what might be thought of as a post-heroic Iliad for the Iraq war. Now, in Thank You for Your Service, he has written an equally cogent Odyssey.

Finkel’s earlier book, The Good Soldiers, chronicled with frankness and force the 15-month deployment of the Second Battalion, 16th Infantry Regiment to Baghdad during the surge of 2007-8. It was as illuminating an account of the Iraq war’s grueling futility as I have read. One of Finkel’s insights concerned soldiers’ elemental dissociation from all those people and places left behind, in the case of the 2-16, the environs of Fort Riley, Kan.: ‘Home: it was less a place than an act of imagination now, a realm fundamentally disconnected from what life had become.’

In Thank You for Your Service, Finkel focuses on the home front that had seemed so remote to these soldiers during their deployment. For several of the battalion’s survivors, who are struggling with a variety of psychological and physical ailments, home assumes an unrelenting immediacy that proves more baffling and tormenting than the war itself. It is a world dominated by an elemental loneliness. Removed from the bonds of their unit — severed from the love of comrades that Finkel calls ‘the truth of war’ — each soldier navigates the postwar on his own: ‘It is such a lonely life, this life afterward.’

As he did in The Good Soldiers, Finkel absents himself from the narrative, immersing the reader in the quotidian life of soldiers and their families. Thank You for Your Service is elegantly reported, free of the entanglements of crusading self-aggrandizement on the one hand and, on the other, an overidentification with its subjects. Finkel refuses to pathologize soldiers, even as he concentrates on the 20 to 30 percent who have been psychologically damaged to some degree by their service in Iraq or Afghanistan: ‘Most are O.K.,’ he says, ‘and others are not.’ 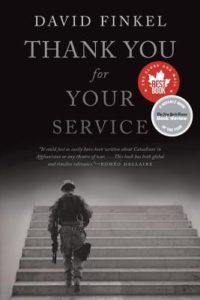 “This is not — nor should it be — an easy book. But it is an essential one. Finkel refuses to gild the misery and ugliness of the last decade and the unpoetic aftermath of war with the kind of sentimentality that has so often clouded our thinking, not only about our military commitments but also about the veterans they produce.

The book is all the more powerful for its detachment. Finkel champions the cause of those who are not O.K., yet is never partisan: ‘Every war has its after-war,’ its consequences and reminders, he writes, ‘and so it is with the wars of Iraq and Afghanistan, which have created some 500,000 mentally wounded American veterans,’ a number that will have an impact on American social policy, medical care and the overall economy for years to come. Finkel invites his readers to imagine these half million veterans as ‘points on a map of America, all suddenly illuminated at once. The sight would be of a country glowing from coast to coast.’ Yet ‘another way,’ he continues, ‘would be to imagine them one at a time.’ And that’s precisely what he does.

He traces the fitful arcs, and sometimes premature deaths, of several lives connected directly or indirectly with the 2-16: Sgt. Adam Schumann, the central figure of the narrative, who is superb in combat but disintegrating in peace; Amanda Doster, a widow just holding chaos at bay, who for a time drives everywhere with a box of her husband’s ashes strapped in with a seat belt; Patti Walker, an advocate with the Army Wounded Warrior Program at Fort Riley, who ‘is defined by the stress of dealing with the problems of 49 wounded soldiers during the day . . . and then going home at night to the 50th … her husband, Kevin, who was blown up in Iraq’; Tausolo Aieti, a heavily medicated soldier with a perpetually ‘stunned look on his face.’ Despite having received diagnoses of post-traumatic stress disorder, depression, attention deficit and traumatic brain injury, Aieti graduates from a program at the Topeka V.A. to the Warrior Transition Battalion at Riley in the hopes of ultimately rejoining his unit. 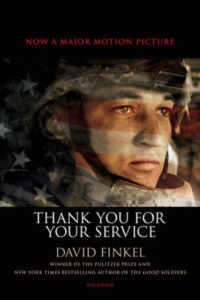 “In addition to shifting among these broken lives, Finkel offers a glimpse of the other end of the military chain of command in the figure of Peter Chiarelli, the vice chief of staff of the Army, who was charged with investigating the increase in suicides throughout the Army. We encounter Chiarelli in a meeting with health care professionals as he seeks a solution. He is told: ‘Good science takes time.’ The exchange between soldier and scientist exposes a significant obstacle to the armed services’ effectiveness in providing support for soldiers with post-traumatic stress disorder and other conditions. The military is a ‘can do’ culture — habitually impatient, defined by uniformity, organized by training, motivated by outcomes and objectives. Today, however, it must reckon with the slow, idiosyncratic and variable course of the damaged human brain.

Finkel also takes us to the monthly Pentagon briefings where Chiarelli receives reports on each suicide. In these sessions, Finkel tells us, Chiarelli repeatedly insisted that the briefers ‘focus . . . less on what happened and more on lessons learned.’ Perhaps the chief lesson of Thank You for Your Service is that some people will always break in war, no matter the preparation they receive or the care administered to them when they return. The inevitability of psychological crises does nothing to absolve us of the responsibility of providing that care. But it should figure much more prominently in the reckoning whenever the hawks urge us on to another ill-conceived display of American military might.

Near the end of the book, Patti Walker finds a space for Adam Schumann at a facility called the Pathway Home in Yountville, Calif., where he spends four months. At Pathway, the ‘haunted soldiers’ of Iraq and Afghanistan meet their counterparts from the previous century’s wars: World War II and Vietnam veterans who live on the campus year-round. These men ‘never say hello, or even wave. They just sit there and drink.’ ‘That’s me in 30 years,’ Schumann declares one day. ‘If this doesn’t work out, that’s me.’

But in a program called ‘Trauma Group,’ Schumann receives a kind of therapy that seems to help. ‘Deep digging’ is how its founder, Fred Gusman, thinks of it: ‘without time limits, back to the beginning and down to the soul.’ Schumann’s signs of healing begin to manifest themselves during his drive back home to Kansas, and one imagines that perhaps he and his family will find whatever suffices to endure ‘the after-war,’ which ‘continues, as eternally as war itself.’ Yet always and everywhere, Finkel reminds us, the war keeps intruding, unbidden, threatening to derail them again.”