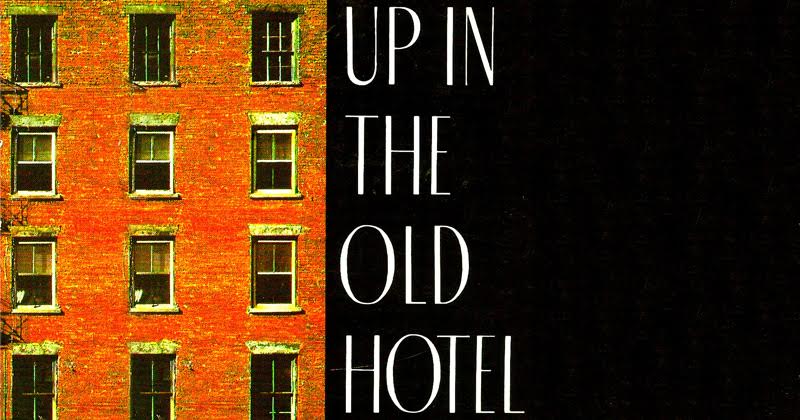 The Graveyard Humor of Up in the Old Hotel 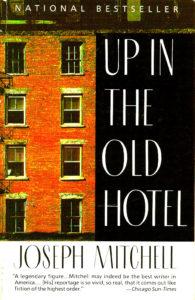 …you can hate a place with all your heart and soul and still be homesick for it.

“…A. J. Liebling and Joseph Mitchell shared a fondness for the eccentricities of life in New York City. The New Yorker has never again had such a pair of reporters when it comes to the subterranean, the aquatic, the twilit characters of the metropolis. But here again, their tastes differed. Liebling loved boxers, newspapermen and the men he called telephone booth Indians, whose language had a wry, idiosyncratic twist around which he could weave his own ineffably droll and florid wit. Of Liebling’s characters you may safely say that they were the occasion for his prose.

But of Mr. Mitchell’s characters—the bar owners, the Bowery preachers, the gypsies, the oystermen—you must say that he is the occasion for their prose. Up in the Old Hotel is a vast omnibus of Mr. Mitchell’s writing, previously collected in four books—McSorley’s Wonderful Saloon (1943), Old Mr. Flood (1948), The Bottom of the Harbor (1960) and Joe Gould’s Secret (1965). In 718 pages, Mr. Mitchell only occasionally gets a word in edgewise. Joe Gould, whose derelict life was a kind of vermilion thread running through the weave of Mr. Mitchell’s days, is emblematic of the men and women Mr. Mitchell was drawn to. Gould was the author of a work that turned out not to exist at all—An Oral History of Our Time some nine million words long. He also translated Longfellow’s poetry into the language of sea gulls.

In the presence of a man like Gould, it is Mr. Mitchell’s custom, in these stories at least, to sit almost mute and almost entirely rapt. His dictum might well have been something Joe Gould once uttered while dining, no doubt, on his most frequent meal, a plate of ketchup. ‘What people say,’ Gould said, ‘is history.’ 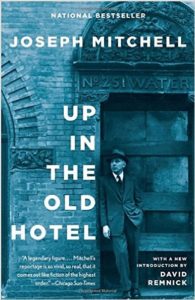 “Mr. Mitchell’s art is to elicit history from an enormous range of people, and then to cause their words to fall into a shape that gives the reader none of the agony the unreconstructed reveries of these long-winded men might have done. In fact, the longer they talk, the more one admires them, something both Mr. Mitchell and his editors at The New Yorker had the wit to recognize.

Though Mr. Mitchell loves the Bowery preachers and the tavern owners and the gypsies of old New York, his favorite figures are the men who lived and worked on New York’s waterfront. In presenting the people he wrote about—often homeless, always eccentric—Mr. Mitchell seems to me to be posing a tacit question about the character and value of his own life, of life itself. And it so happens that when he writes about the waterfront, that tacit inquiry overlaps with another question that is often in his mind: ‘What’s for dinner?’ And where a waterfront dinner is concerned, Mr. Mitchell has a geographical imagination. The oyster he eats calls to mind the bed in which it was raised, the market in which it was sold and the men whose livelihoods were earned raising and selling it. 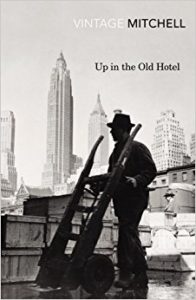 “It doesn’t take an Aristotle to explain how a book full of people and places and customs that no longer exist could make a reader as happy as Up in the Old Hotel does. Mr. Mitchell always mediates the sadness such subjects bring—the loss of time, the life slipping by, the way the old manners fail to hang on—and he lets the reader feel only the pleasure that comes from his own very personal discoveries. He himself remains, in this prose at least, a melancholy man, wandering with a sandwich in his pocket among the wildflowers in abandoned cemeteries, seeking the company of solitary men who are gregarious only in the company of other isolates, sniffing out the odors of the Fulton Fish Market and its old hotels. And in such moments the reader gets a clear glimpse of Mr. Mitchell himself, even as he seems to disappear into the scene he describes.

‘The Fulton Market smell,’ he writes, ‘is a commingling of smells. I tried to take it apart. I could distinguish the reek of the ancient fish and oyster houses, and the exhalations of the harbor. And I could distinguish the smell of tar, a smell that came from an attic on South Street, the net loft of a fishing-boat supply house, where trawler nets that have been dipped in tar vats are hung beside open windows to drain and dry. And I could distinguish the oakwoody smell of smoke from the stack of a loft on Beekman Street in which finnan haddies are cured; the furnace of this loft burns white-oak and hickory shavings and sawdust. And tangled in these smells were still other smells—the acrid smoke from the stacks of the row of coffee-roasting plants on Front Street, and the pungent smoke from the stack of the Purity Spice Mill on Dover Street, and the smell of rawhides from The Swamp, the tannery district, which adjoins the market on the north.’

That city, the one in which Joseph Mitchell finds his gloom lifted by the smoke itself, no longer exists. But a book like Up in the Old Hotel—in print forever, one hopes—will cause another melancholy soul, someone possessed by what Mr. Mitchell calls his ‘graveyard humor,’ to look in the waste places of the present city, listen to its lunatic ravings and report back to us, as amply and as sympathetically as Mr. Mitchell has done.”