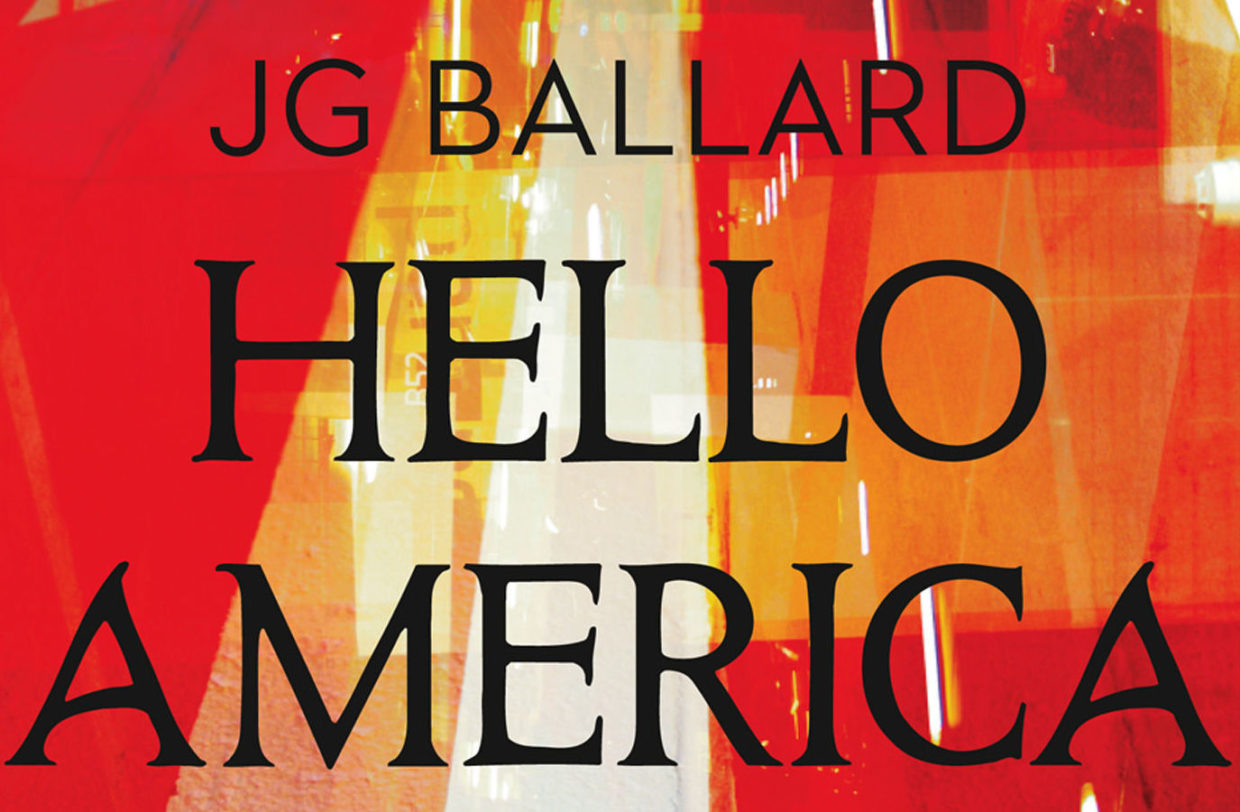 The Excess of Fantasy That Killed America 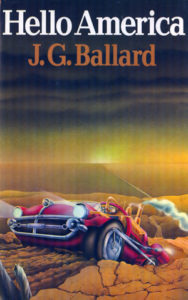 It was an excess of fantasy that killed the old United States . . . some of the last Presidents of the U.S.A. seemed to have been recruited straight from Disneyland.

“J. G. Ballard is renowned among writers of science fiction both for the diversity of his inventions and for the richness of his descriptive language. Hello America, the story of a reconnaissance expedition sent to the abandoned North American continent–abandoned after the exhaustion of world oil supplies and the onset of a permanent energy crisis–reminds us why this should be so. But he is a man of recurrent images as much as he is an innovator, and echoes of his earlier work are in evidence from the very beginning of the book.

The echoing, though, is less a matter of variation, major or minor, on a set of themes, than of the recurrence of a number of fixed motifs in different contexts and combinations. Principal among Ballard’s motifs are the desert, thirst, and drought; and the jungle, luxuriant and rampant. In Hello America these recur in direct apposition: the damming of the Bering straits has so altered the climate that America is desert from the Rockies to the Eastern Seaboard, and jungle from the Rockies to the Pacific.

Abandoned cities are another recurrent motif, civilizations ended or running down, decayed and invaded by nature; whether by desert–New York in Hello America is two storeys deep in sand, giant cacti stand about the Capitol in Washington, Lincoln sits on his memorial ‘staring pensively at the yuccas and gophers’–or by jungle, which riots across a Los Angeles appropriately populated by the escaped inmates of abandoned zoos. 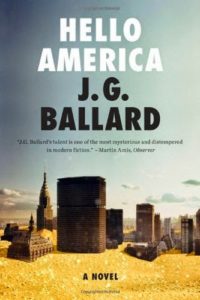 “America itself is another of Ballard’s preoccupations–America with its legends and idols (especially the Kennedys and Marilyn Monroe), America the concrete and the concept, the real and the ideal, celebrated and denigrated in Crash and in Ballard’s academically Burroughsian tour de force, The Atrocity Exhibition (which contains the memorable rhapsody ‘Why I Want to Fuck Ronald Reagan’). Desert, jungle, wrecked civilization, America–all these are returned to and recombined.

‘Under the guise of crossing America . . . they were about to begin that far longer safari across the diameters of their own skulls.’ All the members of the Apollo expedition, especially Ballard’s stowaway hero Wayne, nourished in candle-lit old Europe on pictures in faded magazines, come to America with some fantasy to act out or some dream to realize. 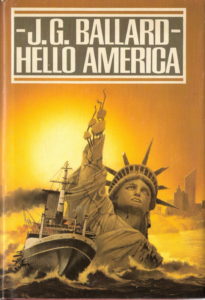 “Ballard’s familiarly obsessional characters, lovers of the plastic and fantastic, are a dismal and unsympathetic crew. Their fantasies, however, are tame in comparison with the reality that he provides for them here. The dénouement takes place in neon-bright, jungle-lapped Las Vegas, with a Howard Hughes or Charles Manson-like, self designated forty-fifth president of the United States in control and out of control, forty-four robotic past presidents (including the three Kennedys, Jack, Teddy, and John-John) parading the streets, mile-high laser projections of John Wayne, Marilyn Monroe, Joe Louis, King Kong, Dillinger and Baby Face Nelson conjuring the air, and a trembling gossamer flight of solar-powered aeroplanes waiting to carry the good guys to safety, California and Reconstruction, as President Manson, bunkered in Caesar’s Palace, nukes Vegas with a 500-kiloton Titan-borne warhead.

Sometimes the novel is unable to contain, in such a way as to give real force to, the crazy ballad of idées fixes. Ballard is unquestionably at his best when writing short stories, and it is hard at times not to feel that Hello America is really a set of short stories. The characters, too, are a little short on anything approaching three-dimensionality, with their unexplained fluctuations of mood and purpose, their unidentifiable-with oddities, and sketchy, solipsistic personalities. Some of the stage setting, especially the account of how America runs out of fuel, is perfunctory and implausible–there’s no mention of Mexican oil or American coal. But Ballard provides a wealth of images, and, if they behave like a fractious orchestra of individually acclaimed soloists, subverting strong narrative development, it is just so that they together work their unsettling and extravagant effects.”