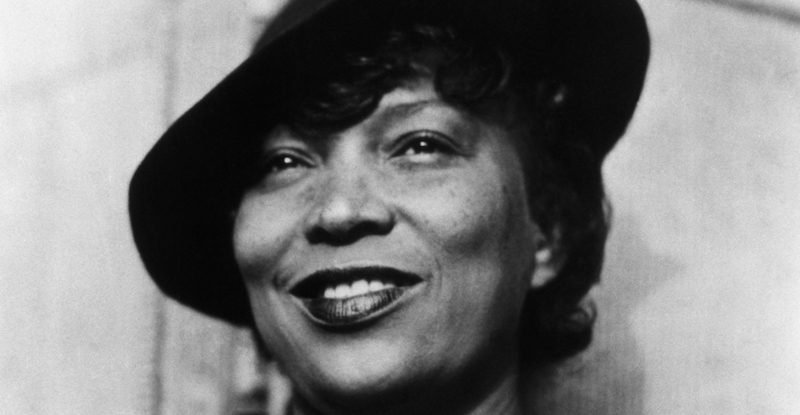 The Dream is the Truth: Their Eyes Were Watching God at 80

Eight decades on from its original publication, we look back at some of the first reviews of Zora Neale Hurston's seminal 1937 novel 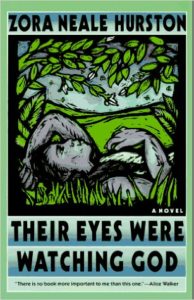 It is so easy to be hopeful in the daytime when you can see the things you wish on. But it was night, it stayed night. Night was striding across nothingness with the whole round world in his hands . . . They sat in company with the others in other shanties, their eyes straining against cruel walls and their souls asking if He meant to measure their puny might against His. They seemed to be staring at the dark, but their eyes were watching God.

“To call Zora Neale Hurston’s Their Eyes Were Watching God an ‘African American feminist classic’ may be an accurate statement—it is certainly a frequent statement—but it is a misleadingly narrow and rather dull way to introduce a vibrant and achingly human novel. The syncopated beauty of Hurston’s prose, her remarkable gift for comedy, the sheer visceral terror of the book’s climax, all transcend any label that critics have tried to put on this remarkable work. First published amid controversy in 1937, then rescued from obscurity four decades later, the novel narrates Janie Crawford’s ripening from a vibrant, but voiceless, teenage girl into a woman with her finger on the trigger of her own destiny. Although Hurston wrote the novel in only seven weeks, Their Eyes Were Watching God breathes and bleeds a whole life’s worth of urgent experience.”

Now considered one of the greatest novels of the 20th century, Zora Neale Hurston’s Their Eyes Were Watching God had to travel a rocky road to immortality. Initial reviews ranged from positive to condescending to downright hostile, as many in the African American literary community bristled at Hurston’s rejection of the Harlem Renaissance and W.E.B. Du Bois’ Uplift agenda. A decades-long wilderness period in which both the novel and its author fell into obscurity ended with the establishment of several Black Studies programs in universities across America in the 1970s and 1980s. This, coupled with a growing black feminist movement, spearheaded by activist writers like Audre Lorde and Alice Walker, helped create a space in which Hurston’s work could be rediscovered. Walker’s 1975 essay, ‘Looking for Zora,’ in which she chronicled her search for Hurston’s unmarked grave, was a particularly significant part of this effort.

80 years on from its publication, we look back at some of the original reviews of Their Eyes Were Watching God: 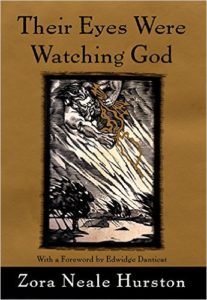 “Whether or not there was ever a town in Florida inhabited and governed entirely by Negroes, you will have no difficulty believing in the Negro community which Zora Neale Hurston has either reconstructed or imagined in this novel. The town of Eatonville is as real in these pages as Jacksonville is in the pages of Rand McNally; and the lives of its people are rich, racy, and authentic. The few white characters in the book appear momentarily and incidentally. The title carries a suggestion of The Green Pastures, but it is to this extent misleading; no religious element dominates this story of human relationships … The only weak spots in the novel are technical; it begins awkwardly with a confusing and unnecessary preview of the end; and the dramatic action, as in the story of the hurricane, is sometimes hurriedly and clumsily handled. Otherwise the narration is exactly right, because most of it is in dialogue, and the dialogue gives us a constant sense of character in action. No one has ever reported the speech of Negroes with a more accurate ear for its raciness, its rich invention, and its music.” 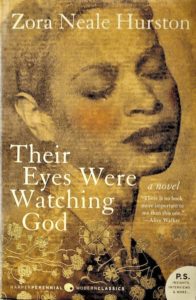 “Miss Hurston seems to have no desire whatever to move in the direction of serious fiction … Miss Hurston can write, but her prose is cloaked in that facile sensuality that has dogged Negro expression since the days of Phillis Wheatley. Her dialogue manages to catch the psychological movements of the Negro folk-mind in their pure simplicity, but that’s as far as it goes. Miss Hurston voluntarily continues in her novel the tradition which was forced upon the Negro in the theatre, that is, the minstrel technique that makes the ‘white folks’ laugh. Her characters eat and laugh and cry and work and kill; they swing like a pendulum eternally in that safe and narrow orbit in which America likes to see the Negro live: between laughter and tears … The sensory sweep of her novel carries no theme, no message, no thought. In the main, her novel is not addressed to the Negro, but to a white audience whose chauvinistic tastes she knows how to satisfy. She exploits that phase of Negro life which is ‘quaint,’ the phase which evokes a piteous smile on the lips of the ‘superior’ race.” 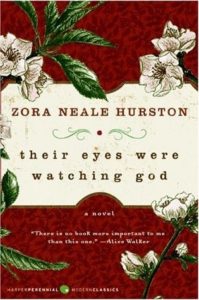 “This is Zora Hurston’s third novel, again about her own people–and it is beautiful. It is about Negroes, and a good deal of it is written in dialect, but really it is about everyone, or least everyone who isn’t so civilized that he has lost the capacity for glory … The story of Janie’s life down on the muck of Florida Glades, bean picking, hunting and the men shooting dice in the evening and how the hurricane came up and drove the animals and the Indians and finally the black people and the white people before it, and how Tea Cake, in Janie’s eyes the ‘son of Evening Son,’ and incidentally the best crap shooter in the place, made Janie sing and glitter all over at last, is a little epic all by itself. Indeed, from first to last this is a well nigh perfect story–a little sententious at the start, but the rest is simple and beautiful and shining with humor. In case there are readers who have a chronic laziness about dialect, it should be added that the dialect here is very easy to follow, and the images it carries are irresistible.” 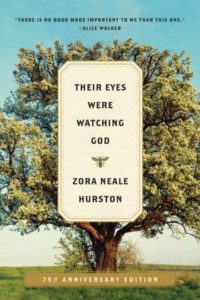 “It isn’t that this novel is bad, but that it deserves to be better. In execution it is too complex and wordily pretty, even dull—yet its conception of these simple Florida Negroes is unaffected and really beautiful … Through these chapters there has been some very shrewd picturing of Negro life in its naturally creative and unself-conscious grace … If this isn’t as grand as it should he, the breakdown comes in the conflict between the true vision and its overliterary expression. Crises of feeling are rushed over too quickly for them to catch hold, and then presently we are in a tangle of lush exposition and overblown symbols; action is described and characters are talked about, and everything is more heard than seen. The speech is founded in observation and sometimes wonderfully so, a gold mine of traditional sayings…But although the spoken word is remembered, it is not passed on. Dialect is really sloppy, in fact…And so all this conflict between the real life we want to read about and the superwordy, flabby lyric discipline we are so sick of leaves a good story where it never should have been potentially: in the gray category of neuter gender, declension indefinite.” 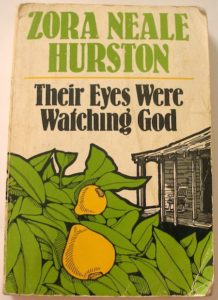 “And now, Zora Neale Hurston and her magical title: Their Eyes Were Watching God. Janie’s story should not be re-told; it must be read. But as always thus far with this talented writer, setting and surprising flashes of contemporary folk lore are the main point. Her gift for poetic phrase, for rare dialect, and folk humor keep her flashing on the surface of her community and her characters and from diving down deep either to the inner psychology of characterization or to sharp analysis of the social background. It is folklore fiction at its best, which we gratefully accept as an overdue replacement for so much faulty local color fiction about Negroes. But when will the Negro novelist of maturity, who knows how to tell a story convincingly — which is Miss Hurston’s cradle gift, come to grips with motive fiction and social document fiction? Progressive southern fiction has already banished the legend of these entertaining pseudo-primitives whom the reading public still loves to laugh with, weap over and envy. Having gotten rid of condescension, let us now get over oversimplication!” 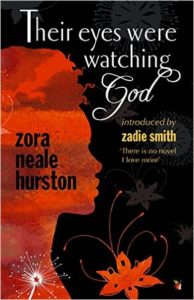 And finally, a more recent take:

“‘There is no agony,’ Hurston once wrote, ‘like bearing an untold story inside you.’ Janie Crawford, forty-ish, with her ‘firm buttocks like she had grapefruits in her hip pockets,’ her ‘pugnacious breasts,’ and her imperial self-possession, has survived the most tempestuous years of her life, buried three husbands, and returned home to tell the story. Or at least to tell it to her best friend Pheoby, who Janie knows will relay it to the curious but envious town folk in the African-American enclave of Eatonville, in the Florida Everglades. (Hurston’s actual hometown.) Quite a tale it is, of three men in succession who married and hurt her in different ways. The last of them she outlived only because she outshot him. This is the great tale of black female survival in a world beset by bad weather and bad men. Her succulent book has its stretches of overripe prose, but that’s the price of taking the chances she takes with language, chances you have to take to arrive at the witchy places she gets to. (Sizing up her third husband, Tea Cake, she notices ‘his lashes curling sharply like drawn scimitars.’) It’s a short book, but you savor it. And after New Orleans, the climactic scene of hurricane and flood is more powerful than ever.