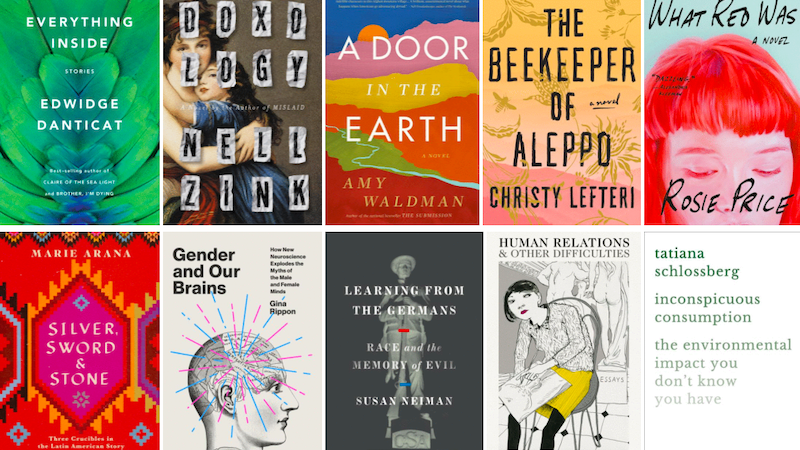 Short stories from Edwidge Danticat, a new Nell Zink novel, an examination of memory and evil, and more

Edwidge Danticat’s Everything Inside; Nell Zink’s Doxology; Marie Arana’s Silver, Sword, and Stone; and Susan Neiman’s Learning From the Germans are among the most critically-acclaimed books of the past seven days.

1. Everything Inside by Edwidge Danticat

“Everything Inside is a haunting, profound collection by Edwidge Danticat—an answered prayer for those who have long treasured her essential contributions to the Caribbean literary canon … With little introduction, we drop into people’s lives midcrisis, just as they’re confronting choices from which there’s no turning back; these characters feel not like strangers, but close friends … How does an artist write so deftly from the outside about people’s interior lives? Everything Inside is an answer to that question: This remarkable writer shows us how.”

“Doxology isn’t fundamentally a music novel. It has many other things on its mind, including a subversive history of American politics from Operation Desert Shield through the start of the Trump presidency, and it’s superb … This book is more ambitious and expansive and sensitive than her earlier work. She lays her heart on the line in a way she hasn’t before … Doxology loses a bit of its sweep, if none of its intelligence, in its final half. Yet it has taken a running leap, regardless, at greatness. Zink writes as if the political madness of the last four decades had been laid on for her benefit as a novelist … Like a mosquito, Zink vectors in on the neck of our contemporary paranoia. She has got a feral appetite for news of our species, good and ill. As dark as Doxology can be, it’s no wonder that its title means a hymn of praise.”

3. A Door in the Earth by Amy Waldman

“Waldman is an ingenious and probing situational novelist … In this deeply well-informed, utterly engrossing, mischievously disarming, and stealthily suspenseful tale of slow and painful realizations, Waldman hits the mark over and over again as Parveen not only plunges into the divide between her privileged life and the severe limitations Waheed’s two wives and the other village women contend with, but is also forced to recognize the tragic ironies of Crane’s influence, especially on the American military. Every aspect of this complex and caustic tale of hype and harm is saturated with insight and ruefulness as Parveen wises up and Waldman considers womanhood and choice, literacy and translation, hubris and lies, unintended consequences, and the devastating chaos of war.”

4. The Beekeeper of Aleppo by Christy Lefteri

“We tend to hear refugee stories in the abstract … But in The Beekeeper of Aleppo, Lefteri gives us a deeply researched, intimate look at the lives of one couple … Lefteri’s slow-building narrative rarely veers into sentimentality or overwhelming bleakness … By creating characters with such rich, complex inner lives, Lefteri shows that in order to stretch compassion to millions of people, it helps to begin with one.”

5. What Red Was by Rosie Price

“..masterful, incisive … Price, herself a survivor, writes with marvelous clarity and acuity. Her prose is lovely and precise, reminiscent of Donna Tartt or Edward St. Aubyn. In the hands of a less observant writer­­­­, or even a clumsier stylist, Kate Quaile’s journey could have felt muddled or sentimental or boring. The story is delicately plotted and quietly piercing … What Red Was is not a novel about how the truth will set you free. It’s uglier than that, withholding easy catharsis.”

“The sad tale of the conquest and what followed over the next centuries in Latin America has been related many times before, but Arana, a novelist, has turned it into literature. Though meticulously researched, the book’s greatest strengths are the power of its epic narrative, the beauty of its prose and its rich portrayals of character … Arana’s strength is the power and passion of her storytelling, and her explanation of what has shaped Latin America over the past half-millennium has the ring of truth … It is a bold assertion, but by the end of this marvelous book, she has definitively and eloquently made the case.”

2. Gender and Our Brains by Gina Rippon

“…reading Gina Rippon’s careful and prolonged demolition of the myth of the ‘female brain’ left me with a powerful sense of relief. Here, at last, are things I’ve long felt instinctively to be true, presented as demonstrable facts … It is a highly accessible book. It’s also an important one. Quite apart from how interesting the science contained within it is, it has the power—if only people would read it—to do vastly more for gender equality than any number of feminist ‘manifestos’ … Brick by brick, Rippon razes this history and, for the (non-scientist) reader, what she says is revolutionary to a glorious degree … The science in Rippon’s book is complex and multilayered. But she looks, too, at the pernicious influence of psychobabble”

3. Learning From the Germans: Race and the Memory of Evil by Susan Neiman

“… richly rewarding, consistently stimulating and beautifully written … Neiman is a professional philosopher with the skills of an investigative journalist and historian … This brief overview barely begins to convey the way this disturbing but hopeful and insightful book wrestles with the questions of who we are as human beings and what values we have as a nation. I strongly recommend it.”

Read an excerpt from Learning From the Germans here

4. Human Relations and Other Difficulties by Mary-Kay Wilmers

“[An] eclectic and acidic selection of pieces by Wilmers … Wilmers offers fascinating character studies of the authors and their subjects, both of whom tend to be ‘difficult’ women … Wilmers has a voice as crisp, clear, and dry as gin, simultaneously amused and wise … Given her ear for the perfect quote, irony, and glancing judgment on human foibles…fellow critics will appreciate this distillation of Wilmers’s legacy and the record of a distinct sensibility that feels bitterly astute, inimitably of its time, and enduringly relevant.”

Read an excerpt from Human Relations and Other Difficulties here

5. Inconspicuous Consumption: The Environmental Impact You Don’t Know You Have by Tatiana Schlossberg

“… clever, informative, and unexpectedly charming … Schlossberg is careful to remind readers that we’re all in this (planet) together … Though the subject matter is bleak, Schlossberg takes care to emphasize that while individual choices matter, governmental and corporate transparency matters much, much more. To halt the climate crisis, we must first understand the many factors that create and sustain it, and this book offers the tools for that understanding. The author breaks complex issues down to be understandable to the lay reader, while her humor and wit ensure that readers will close the book feeling energized rather than hopeless.”