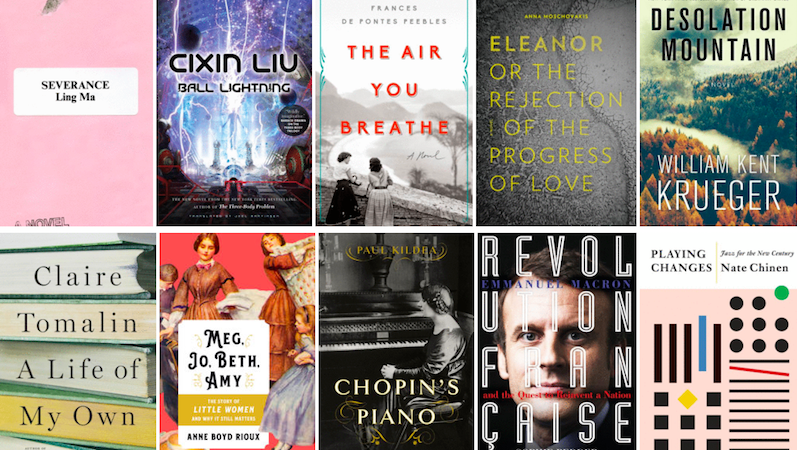 Featuring an apocalyptic satire, a quest to reinvent France, a love letter to Little Women, and more

“Ling Ma’s shocking and ferocious novel, Severance, is a play on the ‘Why I left New York’ theme, but it’s one you’ll actually want to read … a fierce debut from a writer with seemingly boundless imagination … Severance goes back and forth in time, contrasting Candace’s tedious office job with her travels across post-apocalyptic America. It’s a technique Ma uses to great effect — it’s jarring in a great way, making the horror of her new circumstances all the more intense … while Severance works beautifully as a horror novel, there’s much more to it than that. It’s a wicked satire of consumerism and work culture … Severance is the kind of satire that induces winces rather than laughs, but that doesn’t make it any less entertaining … [a] a stunning, audacious book with a fresh take.”

Read an excerpt from Severance here

“Not only brilliant books in their own right, the Remembrance of Earth’s Past saga serves as a reminder of the presence of impressive and unique science fiction outside the English-speaking world … another intriguing, cerebral scientific mystery … Liu covers a lot of scientific and philosophical ground, and he’s not afraid to slow things down to allow his characters to discuss the real-world underpinnings of their work, or the virtues of, for example, pure versus practical research. Some might regard these dips in the pacing as a flaw, but for Liu, the digressions seem to be the point … he builds tension as masterfully as ever.”

3. The Air You Breathe by Frances de Pontes Peebles

“An absolute masterpiece … Peebles is a master at sustaining dramatic tension, a wizard with intrigue and language, and a skilled curator of intimacy. She knows when to give context… and when to allow a thing to be a thing … Even more challenging is the ability to be able to create unapologetic antiheroes, which Peebles excels at … The tension created by these elements—the sociopolitical context, the drama of interpersonal relationships and queerness, and the high-stakes nature of subsisting off art—make a masterful book, sure to enthrall from beginning to end.”

4. Eleanor, or, the Rejection of the Progress of Love by Anna Moschovakis

“A book about the inner lives of our contemporaries must be conversant with how it feels to live right now, and at this Eleanor excels. Not in the weak sense of name-dropping popular websites, fashionable trends, and political slogans, rather in the much stronger sense of understanding how we use those things to construct our identities and live our lives … Moschovakis has created a novel of great strength and flex. Much as it bends and twists and gyres, it does not break, in fact only accumulates more tensile strength from the motion, just as, one hopes, we all can do.”

“If his loyal spirit, derring-do, Iron Range ruggedness and protect-my-people nature don’t hook you, an irresistible story line will … Krueger keeps up the tension and mystery in this, the 17th Cork O’Connor novel, partly through his comfort with real places—Iron Range towns, Iron Lake and other familiar treasures. He uses them to develop an uncanny sense of place and purpose; we can almost smell the pines and see the reflection of the moon on a cold lake. Krueger has an obvious affection for his richly developed, recurring characters … Krueger’s taut storytelling and intricate plots almost always center on a topic in the news, a compelling hook he’s researched well and has wrapped his tale around.”

1. A Life of My Own by Claire Tomalin

“A Life of My Own, is on one level a phlegmatic tour of a fruitful life … On another level, the book is one shock after another … A Life of My Own has a formal quality. Occasionally there is the unhappy sense that Tomalin is viewing her own life from too great a distance, as if she were a biographer working through a stranger’s life from file cards. She is a fluid writer but not the sort to go in search of le mot juste … Yet there is genuine appeal in watching this indomitable woman continue to chase the next draft of herself. After a while, the pages turn themselves. Tomalin has a biographer’s gift for carefully husbanding her resources, of consistently playing out just enough string. When she needs to, she pulls that string tight.”

Read an excerpt from A Life of My Own here 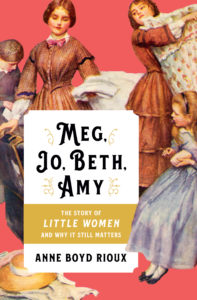 “From the vivid, fire-lit opening scene, with the teenage Marches bemoaning their poverty and the prospect of Christmas without their father, each girl has a distinct voice that hints, as Ms. Rioux says, ‘at her unique personality.’ … the author observes, ‘Alcott’s classic pointed the way not only toward girls’ future selves but also toward the future relationships they could have with men and with each other. She imagined her characters moving into a mature womanhood that achieves self-fulfillment as well as shared joys and responsibilities, a storyline today’s little women desperately need.’ She’s right about that. The thoughtful pages of Meg, Jo, Beth, Amyamount to a plea: Let us not forget these girls! We still need them.”

“While it is assumed that most readers are aware that the Nazis looted art, what isn’t as well known is the theft of other cultural symbols such as musical instruments. Kildea does an excellent job of tracing and attempting to solve the mysteries of what happened to one of these iconic symbols. The author’s enthusiasm for the subject is very apparent and he expertly and effortlessly illustrates how Landowska’s trials and tribulations relates to Chopin’s, a saga which redefined portions of the cultural and political history of mid-20th century. Captivating and intriguing, Chopin’s Piano will most certainly entertain both novice and hardcore music historians.”

“As Sophie Pedder notes in her excellent and lavishly sourced account of Macron’s ‘quest to reinvent a nation,’ the French promise to reform at home—and conforming with EU fiscal rules is just part of a package of domestic measures designed to reassure Berlin—is a quid pro quo. In return for seeing through unpopular changes to the supply side of the French economy, as well as stabilizing the public finances, Macron expects Germany to support his ambitious plans for deeper integration of the eurozone … Pedder is sensitive…to Macron’s capacity for looking ridiculous—his avowed aim to be a ‘Jupiterian’ president will have elicited smiles in chancelleries across Europe. But she also recognizes that he has thought deeply about the symbolic weight that the presidency carries.”

“Nate Chinen has written a terrific book about the shape of contemporary jazz, and right now is a terrific time to read it … Instead of looking for tidy torch-passings or binary clashes between competing schools and styles, his ecumenical ear glides across the entirety of the greater jazz ecosystem, listening for the good stuff … The book’s arrival ultimately feels so well-timed … you don’t have to sit around and wonder what it all sounds like. Just reach for that little computer in your pocket and press play … Each album Chinen has chosen is worth at least one spin on your handy pocket computer … Playing Changes encourages us to listen to jazz the same way we might try to live life: Start anywhere, go everywhere.”