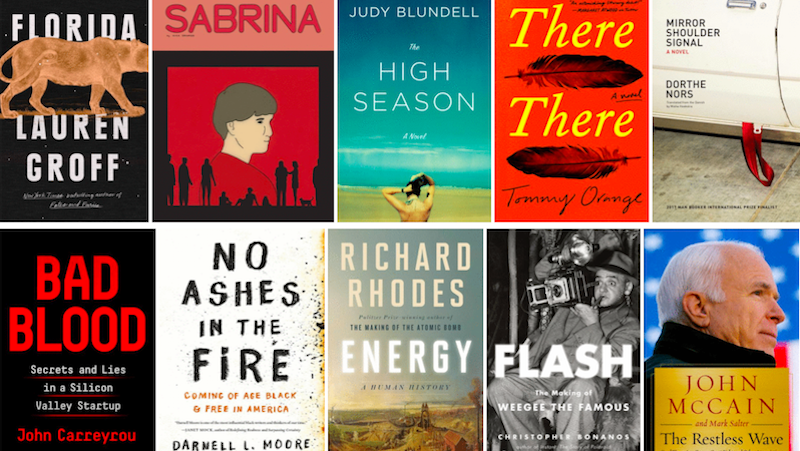 Fates and Furies author Lauren Groff tops our fiction charts this week, with the rave reviews flying in for her Sunshine State-set story collection, Florida. Nick Drnaso’s disquieting graphic novel, Sabrina, also put in a strong showing, as did Judy Blundell’s smart and breezy The High Season. John Carreyrou’s Bad Blood—an investigative account of the rise and shocking collapse of Theranos, the multibillion-dollar biotech startup—is our best reviewed nonfiction title of the week, with Darnell L. Moore’s searing memoir No Ashes in the Fire: Coming of Age Black and Free in America, and Pulitzer Prize-winner Richard Rhodes’ Energy: A Human History not far behind.

“Drnaso’s simple, rigid drawings capture the bleak blankness of much contemporary life, anomie hovering over almost every interaction, both real and virtual. His muffled colors build the texture of a world bombarded with distraction yet void of connection, and his careful use of boxes and frames conveys the stunning lack of freedom the supposedly free space of the internet constructs, a dim and inert prison of both the body and the spirit … Drnaso’s book leaves the audience holding its breath, hoping his flawed but sympathetic characters will find their way from lies to truth.”

3. The High Season by Judy Blundell

“Blundell (who has spent most of her career in YA, often under the pseudonym Jude Watson) casts her net wide: Seasonteems with angst-riddled teenagers and twentysomething grifters, townies and trophy wives and eccentric billionaires. But she weaves them all together seamlessly, landing somewhere in the smart, breezy sweet spot between Meg Wolitzer and Elin Hilderbrand.”

4. There There by Tommy Orange

“Everything about There There acknowledges a brutal legacy of subjugation—and shatters it. Even the book’s challenging structure is a performance of determined resistance. This is a work of fiction, but Orange opens with a white-hot essay. With the glide of a masterful stand-up comic and the depth of a seasoned historian, Orange rifles through our national storehouse of atrocities and slurs, alluding to figures from Col. John Chivington to John Wayne. References that initially seem disjointed soon twine into a rope on which the beads of American hatred are strung … Orange makes little concession to distracted readers, but as the number of characters continues to grow we begin to grasp the web of connections between these people … As these individual stories intersect, the plot accelerates until the novel explodes in a terrifying mess of violence. Technically, it’s a dazzling, cinematic climax played out in quick-cut, rotating points of view. But its greater impact is emotional: a final, sorrowful demonstration of the pathological effects of centuries of abuse and degradation.”

“Reminiscent of Lydia Davis, Nors sifts through large concepts with concise language, wry humor, and a contained plot … Often meditating on sadness and separateness, Nors writes Sonja’s life with some emotional distance, yet also, at times, with intense affection. And while the story contains overarching symbolism, metaphors, and analogies (driving as a method of escape and independence, vertigo as a lack of life balance, nature as a grounding force), Nors’s hand remains light, and the effects are subtle and elegant.”

1. Bad Blood: Secrets and Lies in a Silicon Valley Startup by John Carreyrou

“In Theranos’s brief, Icarus-like existence as a Silicon Valley darling…[t]he company was the subject of adoring media profiles; it attracted a who’s who of retired politicos to its board … This is the story the prizewinning Wall Street Journal reporter John Carreyrou tells virtually to perfection … Carreyrou’s presentation has a few minor flaws. He introduces scores of characters and, after a while, it becomes hard to keep track of them. In describing these many players he sometimes relies on stereotypes … Such blemishes in no way detract from the power of Bad Blood. In the second part of the book the author compellingly relates how he got involved, following a tip from a suspicious reader. His recounting of his efforts to track down sources…reads like a West Coast version of All the President’s Men. The author is admirably frank about his craft … The question of how it [Theranos] got so far—more than 800 employees and a paper valuation of $9 billion—will fascinate business school classes for years.”

2. No Ashes in the Fire by Darnell L. Moore

“Moore displays magnificent self-reflection. He narrates his story in a looping, lyrical style that approaches complicated truths through metaphor … Framed as a kind of investigation of home, Moore’s memoir traces the history of dispossession and displacement beneath his family’s poverty … For Moore, these efforts often take the form of an empathy that borders on the transcendent … No one is safe. No one is presumed neutral or innocent. The author does not presume himself to be … He refuses to accept a narrative of victimhood—that somehow, in all the mess of it, he emerged blameless and untouched by the rigorous assault on black life.”

Read an excerpt from No Ashes in the Fire here

“It’s…wide-ranging and compulsively readable … clear and informative; he’s able to explain difficult concepts without patronizing the reader … And his decision to focus his book on the people behind energy is a good one. He doesn’t limit himself to obvious names … Refreshingly, Rhodes refuses to be cynical about the future of energy and its effects on climate change … he urges action without succumbing to fatalism … Energy is an excellent book that manages to be both entertaining and informative, and it’s likely to appeal to both science fans and those of us who only passed physics by the skin of our teeth.”

4. Flash: The Making of Weegee the Famous by Christopher Bonanos

“Now Christopher Bonanos’s Flash: The Making of Weegee the Famous has displaced a host of fragmentary recollections and the loudmouthed, unreliable memoir, Weegee by Weegee, published in 1961. Bonanos resurrects the inky roar of this world with a fine, nervy lip … Weegee and his world don’t encourage minimalism, and, fifty years after his death, he has at last acquired a biographer who can keep up with him.”

5. The Restless Wave by John McCain and Mark Salter

“…[a] remarkable farewell … McCain memoirs are a sturdy perennial on American bookshelves — his name appears on the spine of a handful—but this one is different, not least because both he and his outlook (once fairly conventional Republican fare but now described as ‘maverick’ because those views no longer are conventional) are in rapid decline. This book is clearly intended to be his last testimony and last political will and testament. In truth, the words, thoughts, and impulses that comprise the McCain testimony once were well-worn cliches … Today those words, and many others between the covers of The Restless Wave, are frontal challenges to the current zeitgeist.”