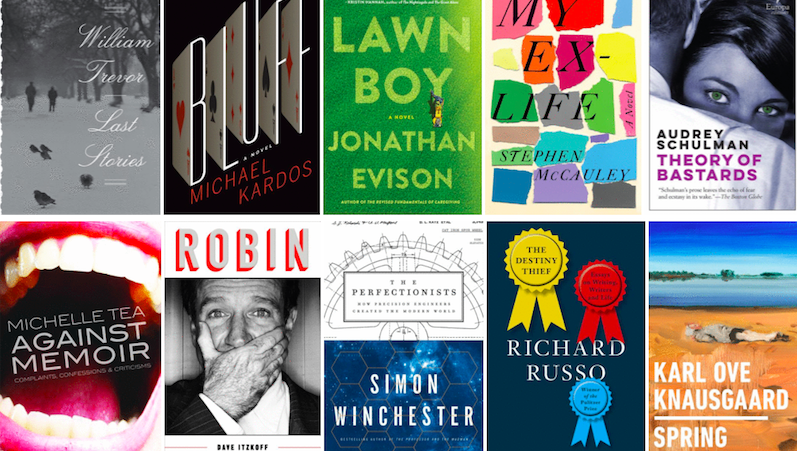 “Most notably, his stories open with comments so blandly informational, so plain and unnoticeable, that they arouse no expectation and appear to promise little … such flat and unhurried beginnings are subversions concealing a powerful slyness. Trevor’s stories traffic in plots, fated or willed, and hurtful. They may be coiled in pity, but they are never benign; their pity is unregenerative. Nor do they carry broad social vistas or axes to grind or hidden symbols … in this small, final, seemingly quiet but ultimately volcanic book of stories, Trevor denies and defies—maybe spites—the promise of decline. As for volcanic: his people, at the finish of each turning of circumstance, are stunned and stilled, like the molds lava once made of the victims of Pompeii. And it is as if he will never run out of plots … we honor him as the supreme master of his honest art.”

“In the tantalizing new thriller Bluff, Michael Kardos reveals himself to be a master at dealing from the middle of the deck. More than once, you’re sure of the fate of Natalie, a 27-year-old magician who has run out of luck, inspiration and money. But then Kardos fools you with his smooth shell game … Bluff doesn’t miss a trick.”

“Jonathan Evison takes a battering ram to stereotypes about race and class in his fifth novel, Lawn Boy. It’s a semi-autobiographical tale spiked with angst and anger, but also full of humor and lots of hope. Mike Muñoz is the lovable young hero of this engaging story in which people growing up outside the cushy world of the upwardly mobile get knocked down over and over … everything leads to a lesson we can all learn: Change comes when people work together … Life in 2018 appears to be getting more complicated for people like Mike, but Evison has written an effervescent novel of hope that can enlighten everyone.”

4. My Ex-Life by Steven McCauley

“McCauley is a master of the charm offensive—social criticism (from a decidedly liberal point of view) sweetened with wit. Some one-liners, like Julie’s attitude toward extortionate divorce settlements, are positively Wildean, although underneath there’s a serious message about scruples … In the vein of inveterate beguilers like Laurie Colwin, Elinor Lipman, and Maria Semple, McCauley is warm but snappy, light but smart—and just plain enjoyable. His purview is not the big issues like race, intolerance, and poverty, but life’s hiccups and fumbles. He understands the lure of cozy domesticity—and the absurdity of too many throw pillows. And once again, in My Ex-Life, McCauley never lets you forget that love truly is a many-splendored, not easily categorizable thing.”

5. Theory of Bastards by Audrey Schulman

“Ms Schulman’s imagined future is intriguing, an all-too-credible realm of self-driving cars, talking fridges, printable food and data-accessing BodyWare, plagued by extreme weather and cyber-attacks. Her cast, human and simian, is compelling, particularly her heroine, who rebounds from one cruel blow after another … Ms Schulman’s finest novel yet is an examination of sexual relations, the ‘careful theatre’ of civilisation, and humanity’s responsibilities in a rapidly changing world. It is both an edifying read and an exhilarating one.”

1. Against Memoir by Michelle Tea

“..the best essay collection I’ve read in years … Tea’s reporting from Camp Trans is the opposite of the broad and ignorant way that gender nonconformity is written about in mainstream news outlets. It is done from a position of deep understanding, of detail … Tea honors the HAGS gang because it’s personal, because it’s important, and because the bad, hard, beautiful life of poor queers doesn’t make it into history. Her writing about butch-femme romance extends one hand back to the history of punk lesbian publishing and another forward, into the future. She writes the lives of the SM dykes, the trans women excluded by normative lesbians, the poor butches who are for some reason never, ever on television. Swagger is a way of walking away from, or through, the tough conditions of a heteronormative world. If Tea over-romanticizes that walk for a moment, it’s a small price for so much truth.”

“Itzkoff has delivered a breathtakingly good biography, exhilarating a lot of the time, yet disturbing, too, and one of the best books ever written about anyone who sees no way out of life except by trying to make people laugh. Or is it weeping? Who can tell in a storm? … He was 24, profuse and unmanageable, and by March 1979 he was on the cover of Time. Nothing in Itzkoff’s unstintingly readable book is as amazing as those few years—because they are possibly the ones in which Robin was most lyrically free … He did not really write his own material or shape his projects. But when the hurricane was there, he let it vent. He was unique, and this book needs no subtitle. Just hope no one ever tries to play him.”

3. The Perfectionists by Simon Winchester

“Winchester is a champion humanizer; it’s the foremost of his many writing skills. He sifts through the historical record, builds impressive bibliographies, and then crafts it all into three-dimensional characters … Winchester carefully and entertainingly furthers his story from mechanics to precision to hyper-precision of the kind that, for example, led to the great line of Leica lenses prized by photographers for decades … The story Winchester tells is one of steady, almost inexorably increasing complexity, and this can make the book’s later sections heavier going for the lay reader … It’s a testament to Winchester’s narrative skill, honed over two dozen books, that he makes even the most arcane of technical specifics smoothly comprehensible in context … The Perfectionists is at heart an account of the unsung heroes of our modern world.”

Read an excerpt from The Perfectionists here

4. The Destiny Thief by Richard Russo

“Readers who come to this book in search of the storyteller they know from Russo’s fiction will be well-rewarded. The strongest pieces here are stories that emanate from the author’s life—about writing, teaching and friendship … In the end, some readers may prefer the more well-rounded author-teacher-critic version of Russo, while others will favor the undiluted storyteller. Either way, Russo delivers the cozy intelligence and comic savvy that readers have come to admire.”

“There are two conspicuous mysteries and a few quiet ones that keep us anxiously focused as Knausgaard describes the routines and variations of everyday family life. He wants to show us that our thoughts, impressions, and memories are actions too … As the house-making dad, the anxious husband and father, Knausgaard the writer continues to seem to me at his greatest, as he is in Spring, situating himself in the present day while he unpeels the past that is in its midst … It’s poignant and beautiful, with his usual constant striving toward the most exposed vulnerability.”