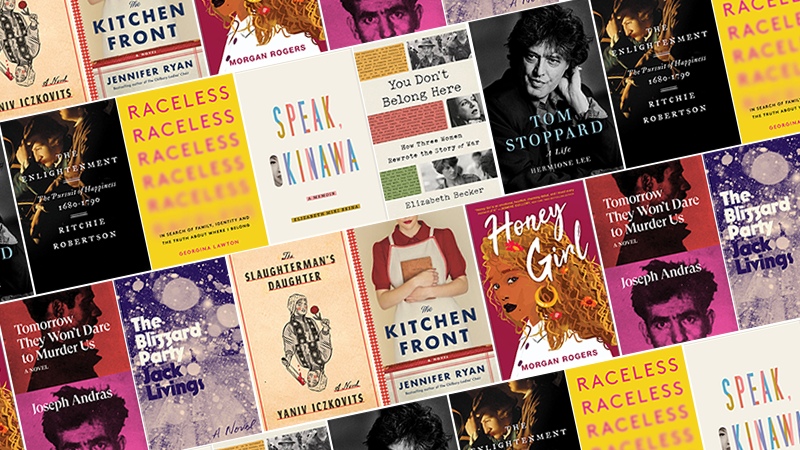 Hermione Lee’s Tom Stoppard: A Life, Yaniv Iczkovits’ The Slaughterman’s Daughter, Jennifer Ryan’s The Kitchen Front, and Ritchie Robertson’s The Enlightenment all feature among the Best Reviewed Books of the Week.

“Occasionally a book comes along so fresh, strange, and original that it seems peerless, utterly unprecedented. This is one of those books. You might hear traces of Gogol or Isaac Babel in Iczkovits’ voice, but they’re only traces … If occasionally Iczkovits’ superb humor slips too far into the slapstick, you’ll forgive him: He’s so compelling a storyteller he could be forgiven anything. Likewise, the passages that delve into Mende’s inner life are so textured and rich they can’t help but draw attention to the fact that Iczkovits never quite explicates Fanny’s own thoughts to an equal degree. But these are minor quibbles. Iczkovits is a superb talent, and this novel is a resounding success. As witty as it is wise, Iczkovits’ novel is a profoundly moving caper through the Russian empire.”

“… positively delicious … Ryan continues to excel at creating warmhearted, intriguing homefront drama … Ryan uses alternating chapters to explore each woman’s personality, moving the drama steadily along with brisk dialogue and action. This is very much a book about women’s rights, strengths and abilities, and the class differences among characters add drama and a dash of complexity … Recipes are included for each round, some adapted from wartime leaflets. They’re fun to read, and each is well integrated into the unfolding drama…Historical details sprinkled throughout are equally fascinating … Ryan injects humor into their sorrow—as well as empowerment—as the group gradually learns to band together and pool their talents instead of facing off as kitchen opponents … While The Kitchen Front goes down like a spoonful of sugar, Ryan manages to instill substance and plenty of food for thought in its creative and ultimately uplifting story.”

“The story unfolds in ways that defy neat labels of ‘romance’ or ‘coming-of-age,’ although there are strong elements of both. Instead, Rogers leans into the messy constellation of life for a young, Black, queer professional in a world that doesn’t always—or almost ever—make sense … Porter is an engaging protagonist, and she is enriched by the characters around her … centers queer friendship above all else. Both Porter and Yuki have rich queer community, and these characters are fully rendered and crucial to the scaffolding of the story. It is refreshing, and moving, to read a book about queer love that ripples much further out than the narrow definition of love that heterosexual culture tells us is primary. The love between friends can be, and often is, more profound than any other kind of love … an absorbing read, and deftly captures the trappings of millennial life, especially for queer Black, Indigenous and people of color characters in American cities. Its expansion on what a love story can be feels restorative, especially as we cross the threshold into our second year of a pandemic during which expressing love has become more important than ever. This is the kind of non-YA coming-of-age novel the world could use more of.”

4. Tomorrow They Won’t Dare to Murder Us by Joseph Andras, trans. by Simon Leser
(Verso Fiction)

“…electrifying … Andras gives an unsparing account of the capture and execution of the real-life revolutionary Fernand Iveton at the hands of the French Army … Andras is most interested in the intimate dimensions of this radical life. He hurries the first pages of his novel through Iveton’s would-be act of sabotage and his subsequent arrest, and then asks us to bear witness not only to the excruciating details of his brutalization, but also to the concatenation of family history … Despite a translation that struggles to render the tautness and lyricism of Andras’s prose, the intensity of both Iveton’s principles and the political moment he’s embroiled in still manages to shine through. Toggling between past and present, Andras allows multiple voices onto the same page — into the same sentence, even—and so sketches the landscape of politics and emotions that sealed Iveton’s fate … Tomorrow They Won’t Dare to Murder Us insists on plumbing the thorniest details of history’s scandal, suggesting—convincingly—that certain truths are best revealed in fiction.”

“… a brilliant debut novel … Livings’s genius resides in his ability to weave these disparate threads together through banal events (a Christmas tree jammed into an apartment’s garbage chute; the selling of a painting; a brawl in a diner), illuminating an intricate pattern that, for Hazel, predestines a dénouement that is startling to the reader. Livings calls to mind the work of Michael Chabon as he brings insight into the way events and circumstances shape his characters’ lives. This is one to savor.”

2. The Enlightenment: The Pursuit of Happiness, 1680-1790 by Ritchie Robertson
(Harper)

“There’s a certain kind of book that defies a direct approach. It arrives on the doorstep, several inches thick, dense with learning … Ritchie Robertson’s thousand-page The Enlightenment, a beautifully written account of a period that everyone has heard of but few pause to think about … Robertson is not uncritical, but he takes issue with, or qualifies, these and other charges leveled at those he calls ‘Enlighteners,’ a catchall term that includes everyone from the grand thinkers—Voltaire, Rousseau, Newton, Hume—to agrarian reformers and village autodidacts … One may wish that the book had been sold by the morsel—as shavings of truffle rather than total bulk weight. That said, alongside Diderot it seems compact. And Robertson has divided the book into a hundred or so mini-chapters, each an anecdote-inflected essay that slots into a larger framework.”

3. Raceless: In Search of Family, Identity, and the Truth about Where I Belong by Georgina Lawton
(Harper Perennial)

“… eloquent … a thoughtful and far-reaching investigation of the importance of racial identity, covering a wide variety of issues including identity theft, the perils and pluses of DNA analysis, how beauty standards are used to repress women of color and the soul-destroying effects of microaggressions. Lawton writes about her journey with passion, erudition and more than a touch of sass. Most of all, she writes with searing honesty—about herself, her family and our society … Ultimately Lawton’s story is one of reconciliation and redemption, which can only ever be achieved with truthfulness, and of the limitations of love … Beautifully and movingly written, Raceless is an important book about the cost of deception and the value of identity.”

“[A] masterful memoir in which Brina examines the complex relationship she has with her interracial parents … Speak, Okinawa is both a mediation on Brina’s own family as well as a powerful history of the United States occupation of Okinawa, where it maintains a massive military presence to this day … Brina’s writing is crisp, captivating and profound … As educational as it is entertaining, Speak, Okinawa is well worth the read.”

5. You Don’t Belong Here: How Three Women Rewrote the Story of War by Elizabeth Becker
(PublicAffairs)

Read an excerpt from You Don’t Belong Here here

“Becker’s examination of three journalists’ careers—Webb, Frances FitzGerald from America and Catherine Leroy of France—powers this absorbing narrative about the challenges of covering the Vietnam War … a significant contribution to the history of both the Vietnam War and women in journalism.”