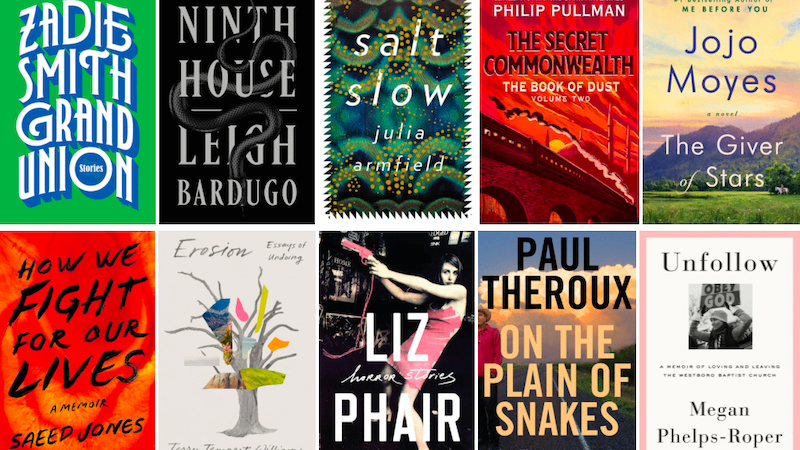 Zadie Smith’s Grand Union, Philip Pullman’s The Secret Commonwealth, Saeed Jones’ How We Fight For Our Lives, and Liz Phair’s Horror Stories are among the most critically-acclaimed books of the past seven days.

“These masterful tales impress, engage and occasionally infuriate as Smith brings her dazzling wit and acute sensitivity to bear. These stories are ready to grapple with the complex times we live in … If anything serves this collection best, it’s the humor that runs through the stories like a lazy river. All genres are Smith’s to play with, from fables to science fiction to a realistic conversation between two friends. Even the few weaker efforts still brim with ideas and intelligence. No subjects are off-limits.”

“Bardugo’s greatest power is ushering readers of any age through big, cast-heavy books with clarity and narrative precision. She is great at crime capers and misdirection. She can move groups of characters around a made-up city or a magical New Haven with equal ease … in Ninth House, [Bardugo] seems to feel freer to let us into her world more abruptly, with a bit more terror and a bit less hand-holding … For any audience, Bardugo makes unexpectedly strong rivers of stories, purposed by swift currents of feeling. As you step further into the nasty and confusing dark of Ninth House, you feel for her caught-up characters. That’s what usually gets discarded first in these genres when writers get distracted by world-building or struggle with plot. But Bardugo’s characters feel real—and she doesn’t forget that everyone hurts.”

“Armfield’s fictions are set on…thinner surfaces, unstable places where boundaries—between humans and animals, wakefulness and sleep, land and sea—are prone to weaken or disappear. Grounded in the everyday, the stories borrow from myth and Gothic literature, their familiarity upended by elements of the uncanny and macabre. Bodies are sites of transformation; they can metamorphose, turn to stone or rise from the dead with tendons exposed and skin coming away from the bone … Armfield…pays as much attention to her sentences as she does to her plots, shifting or consolidating meaning with the use of a single word. Her writing is impeccably honed, full of juxtapositions and qualifications that help to create a creeping sense of unease … Tapping into the darkness of the contemporary world, she brings to mind other young British writers like Sophie Mackintosh but her fantasies have a precision and surreality of their own … Women have animal as well as human natures here; they can be difficult and vengeful and across the collection the male body count is high … a bold and timely collection that skews unpalatable truths in order to see them afresh.”

4. The Book of Dust: The Secret Commonwealth by Philip Pullman

“Pullman is a staggeringly gifted storyteller, and in The Secret Commonwealth his talents are on full display … The novel gallops forward, full of danger, delight and surprise. Nearly miraculous, it seems, is Pullman’s ability to sketch character, place and motive in just a few lines; he has a rare ability to make us care about his creations, however far-fetched they may seem. I will not tell you of the plight of the Furnace-Man; I will tell you that you will weep when you discover it … [a] terrific book.”

5. The Giver of Stars by Jojo Moyes

“Though she made her mark writing contemporary romance, Moyes proves just as adept at historical fiction, gracefully infusing her story with strong, memorable female characters and a sprinkling of men who can make a ‘heart flutter like a clean sheet on a long line.’ The Giver of Stars is a celebration of love, but also of reading, of knowledge, of female friendship, of the beauty of our most rural corners and our enduring American grit: the kind of true grit that can be found in the hills of Kentucky and on the pages of this inspiring book.”

1. How We Fight For Our Lives by Saeed Jones

“Saeed Jones’ blunt and candid memoir, How We Fight for Our Lives, violence surges and recedes like a chronic ache … The chapters in Part Three are, by turns, titillating and sad, but Jones’ presentation is always straightforward and unflinching … Jones tends to avoid sentimentality and nostalgia in favor of a matter-of-fact approach, but the memoir is infused with an emotional energy that only authenticity can provide … There are moments of devastating ugliness and moments of ecstatic joy. Readers may find themselves loving the fighters and hating that they’re required to fight. In the final pages, as Jones holds hands with an unlikely dinner companion many miles from home, what remains is lovely and melancholy and, like the rest of the story, if not ideal, apt.”

Read an excerpt from How We Fight For Our Lives here

“An apostle of life and earth and a soul-revving teller of true stories, Williams brings lyricism, candor, mystery, and factual exactitude to the deeply affecting essays collected here … [Williams] traces the nexus between beauty and spirit and explains lucidly and passionately why it’s essential for humanity to conserve nature on our warming planet … Williams reports on enlightening forays in the Arctic, Galápagos Islands, Rwanda, and China, and shares, with profound resonance, her brother’s suicide and the harsh consequences of her and her husband’s protest purchase of oil and gas leases. Williams takes readers far beyond the expected, illuminates unforeseen connections, and rejects despair, embracing, instead, attentiveness and action … Williams’ exquisite testimony of wonder and wisdom is vitalizing and crucial.”

“… an unconventional rock memoir that doesn’t hew to the genre’s norms. And like her entire musical catalog, it’s honest, original and absolutely remarkable … honesty that’s almost shocking … Unsurprisingly to anyone who knows her songs, Phair writes about love and sex with a refreshing frankness … There are so many things to admire about Horror Stories, it’s hard to list them all. It’s a memoir with an original and fascinating structure — Phair recognizes that a chronological account of her life could only go so far in explaining how she became the person she is. She mostly avoids writing about her own songs, and while this may seem to be an odd choice, it’s actually quite refreshing — her music, she seems to indicate, can speak for itself … But the real star of Horror Stories is Phair’s elegant but unpretentious writing, which proves she’s as adept at writing prose as she is at writing songs. And anyone familiar with her music knows how great a thing that is. It’s a truly wonderful memoir, and a rare look into, as she writes, ‘the haunting melodies I hear over and over again in my head.'”

4. On the Plain of Snakes: A Mexican Journey by Paul Theroux

“Theroux, with his impeccable portfolio of literary fiction and travelogues, valiantly ventures further South in a quest to gain a deeper understanding of the Mexican side of this fraught moment between our two countries … Theroux mines every encounter for its uniquely human story, making friends with erudite and everyday people from those who make mezcal to those who make history. Artfully describing landscapes, he meticulously provides comprehensive historical context at every pueblo, monument, or church, creating a textured portrait of a beleaguered country. This is a personal book, and Theroux does not hesitate to articulate his point of view on a number of topics, allowing for no sacred cows as he unapologetically takes into consideration context, anecdotal evidence, and his on-the-road experiences to arrive at his prescription for improving the Mexican situation.”

5. Unfollow: A Memoir of Loving and Leaving the Westboro Baptist Church by Megan Phelps-Roper

“… excellent … Phelps-Roper’s intelligence and compassion shine throughout with electric prose … an eye for detail, and a near-encyclopedic knowledge of the Bible. She admirably explicates the worldview of the Westboro Baptist Church while humanizing its members, and recounts a classic coming-of-age story without resorting to cliché or condescending to her former self. For anyone interested in the power of rhetoric, belief, and family, Phelps-Roper’s powerful, empathetic memoir will be a must-read.”