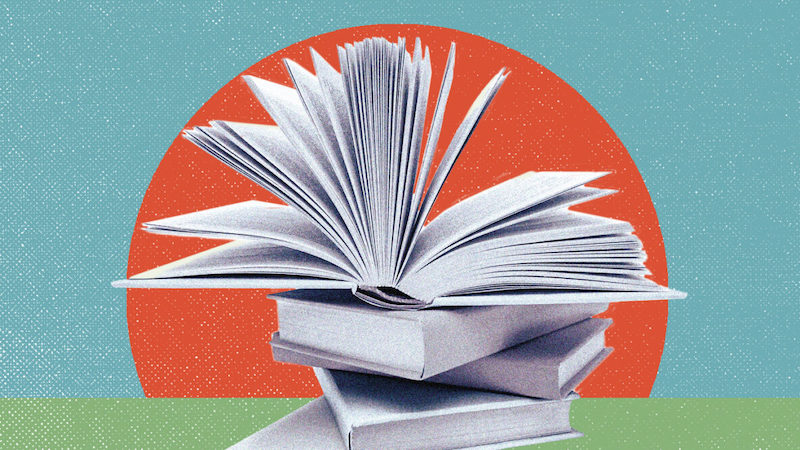 “It’s impossible to predict how, exactly, you’ll fall in love with Gabrielle Zevin’s novel Tomorrow, and Tomorrow, and Tomorrow, but it’s an eventuality you can’t escape … spellbinding and layered with details. Her artistic, inclusive world is filled with characters so genuine and endearing that you may start caring for them as if they were real. Above all, her development of Sam and Sadie’s relationship is pure wizardry; it’s deep and complex, transcending anything we might call a love story … Whether you care about video games or not is beside the point. Tomorrow, and Tomorrow, and Tomorrow is the novel you’ve been waiting to read.”

2. Our Wives Under the Sea by Julia Armfield
(Flatiron Books)

Read Julia Armfield’s essay, “The Ocean is a Lesbian,” here

“I have not stopped dreaming of Our Wives Under the Sea since I finished it … Julie Armfield’s debut novel is sharp, atmospheric, dryly funny, sad, distinctive. If it doesn’t appear on numerous prize lists, I’ll eat my hat … There are ecological undertones—one thinks of rising tides, though the climate crisis is not explicitly mentioned … Indeed, though the writing is relentlessly exacting, Our Wives Under the Sea tends towards the unknowable, which might also be synonymous with death or the uncanny. There is an almost spiritual endlessness to its quest. Like all good novels, it goes deep and then deeper again.”

Listen to an interview with Morgan Talty here

“Talty depicts the relationship between David and Paige perfectly—the siblings clearly care for each other; it’s evident beneath the bickering and the long periods when they don’t see each other … The story ends with both mother and son experiencing terrifying medical emergencies; it’s almost excruciating to read, but it’s undeniably powerful, and, in its own way, beautiful … Talty’s prose is flawless throughout; he writes with a straightforward leanness that will likely appeal to admirers of Thom Jones or Denis Johnson. But his style is all his own, as is his immense sense of compassion. Night of the Living Rez is a stunning look at a family navigating their lives through crisis—it’s a shockingly strong debut, sure, but it’s also a masterwork by a major talent.”

“Shelton’s new memoir, The Church of Baseball, does for filmmaking what Bull Durham did for the national pastime: it demystifies the craft, pillories the business, and celebrates the calling with wit and passion … Shelton’s prose is as natural as his dialogue, and he conjures characters with casual mastery … In The Church of Baseball, as in Bull Durham, Shelton riffs on life in the American grain, and scales the heights of the homegrown surreal. Like Mark Twain, he reveals an unsentimental education that reads like a robust and impudent yarn.”

“That’s what makes this book both universal and exciting. It’s about the breaking of habits, about consciously developing agency over one’s own fate, and about the relief, wonder and even joy that might follow that grief … Hauser builds her life’s inventory out of deconstructed personal narratives, resulting in a reading experience that’s rich like a complicated dessert—not for wolfing down but for savoring in small bites. As she travels back and forth through personal history, she strings scenes together without excessive connective tissue … She trusts us to follow along and get the gist … A delightfully wide assortment of literary and cultural digressions enrich Hauser’s musings, making her book a lot of fun in a brainy, melancholic way … The stories may be different for each of us, but the patterns reveal what we have in common as human beings. What a vital sense of connection both writer and reader get out of the experience … there’s more to this memoir in essays than breakups and so much more to the book than the essay that started it all. An intellectually vigorous and emotionally resonant account of how a self gets created over time, The Crane Wife will satisfy and inspire anyone who has ever asked, ‘How did I get here, and what happens now?’”

3. Imagine a City: A Pilot’s Journey Across the Urban by Mark Vanhoenacker
(Knopf)

Read an excerpt from Imagine a City here

“Imagine a City is, to be sure, a travelogue … It also is a primer on piloting a massive aircraft … It is, too, an examination of the obverse side of getting the urge for going; sometimes it is the urge for going home, even if you can never go home again. It is, in addition, a coming-of age memoir … Vanhoenacker offers a lyrical look at what life is like behind those bolted cabin doors … Who knew that in command of one of humankind’s most remarkable modes of transport was a historian of humankind’s ancient history? Which of course is the charm of this book … At the keyboard, Vanhoenacker has danced, and on his pages there is tumbling mirth indeed.”