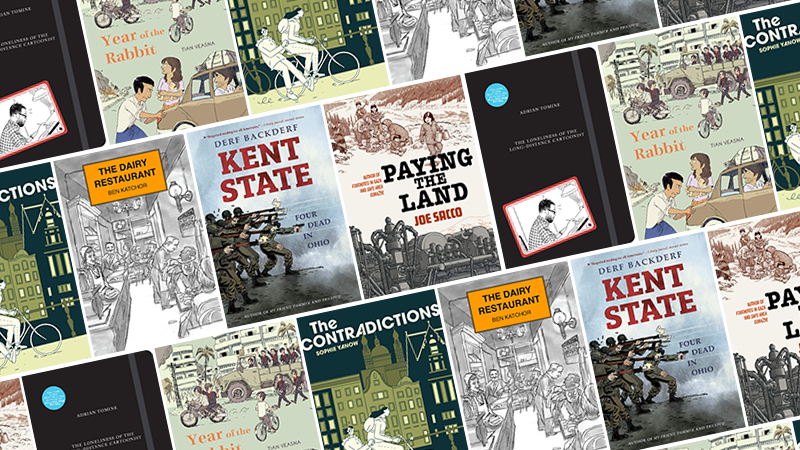 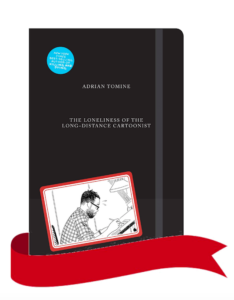 1. The Loneliness of the Long-Distance Cartoonist by Adrian Tomine
(Drawn & Quarterly)

Listen to an interview with Adrian Tomine here

“… full of self-deprecating, self-aware humor … Indeed, what Tomine has managed to do so well here is reveal something that few artists are able to discuss without sounding unaware or falsely humble: the incredibly hard, exhausting, and often can’t-see-the-trees-for-the-forest kind of work involved in building a career in the arts, where there is too little funding, an overabundance of egos running rampant, and layers upon layers of gatekeeping. By using humor and framing his trajectory via professional and personal setbacks and moments of mortification, the cumulative effect of Loneliness is mesmerizing, funny, and deeply honest. Tomine refuses to dwell in the lie that much artistic success publicly perpetuates (whether or not by choice) that it’s always fun, or that it even feels like what many of us imagine success to be. It’s work—work that Tomine is conscious of being lucky enough to be able to keep doing, and there have been perks here and there for sure, but work nonetheless. No one made it easy for Tomine to get to where he is—least of all himself.” 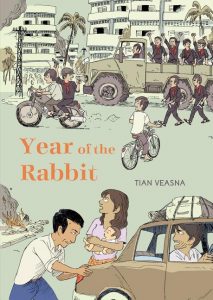 2. Year of the Rabbit by Tian Veasna
(Drawn & Quarterly)

“Veasna’s energetic, loose lines are perfectly suited to capturing the nuances of the chaos and confusion. His art has the quality of a snapshot sketch, pinning a moment to the page: wide, frightened eyes; mud sliding under rubber sandals; the drip of rice gruel from a spoon. Although Year of the Rabbitprimarily follows Khim and Lina (Veasna’s parents), there are multiple overlapping storylines; Veasna’s clear, characterful style makes it easy for the reader to follow the various threads … Year of the Rabbit movingly depicts the rising terror of the Khmer Rouge years … beautiful and jarring.”

“This funny and very knowing graphic novel will still strike an exceedingly loud chord with anyone who is, or has ever been, a fresher, far from home and all at sea … Drawn in black and white, Yanow’s figures are a couple of rectangles topped by the circles of their anoraks, rucksacks and spectacles, while the boulevards and canals around them appear hardly at all. But though such a pared-back style can hardly be said to be beautiful, it’s perfect here. As they trudge from city to city, their days bereft of beauty, variety and everyday joy, Sophie and Zena could be almost anywhere. In the end, for all its comedy, The Contradictions is a book about how principles, if too firmly held, can make a person blind—not just to new ideas, but to all the good things in the world.” 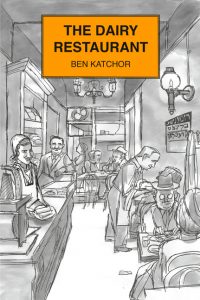 Read an excerpt from The Dairy Restaurant here

“This is an encyclopedic book, history as told through old newspapers and telephone books and scraps of detail found in letters and memoirs … This dense cultural and culinary history is reason enough to come to The Dairy Restaurant. But Katchor…has a sharp mind and a sly sense of humor. His words and his charcoal-palette drawings have a combinatory intelligence … Many of the best moments in this book are stray gleanings …This is a forlorn book, somehow. You wish it came with a good mixed bread basket, for mopping up the lonely broth.”

“It is not only the strongest work of graphic literature released so far this year, but one of the masterpieces of the medium, combining confident storytelling and rich factual detail into a work of devastating emotional impact … Kent State doesn’t subordinate the art to the story. Every scene is dramatically staged and meticulously researched, with notes taking up the final dozen pages of the book … One area where Kent State excels is its evocation of the social and political climate of the late 60s-early 70s … What makes Kent State so powerful is how Backderf mostly keeps the subtext as subtext, and focuses on the lives of his characters. He makes sure we know each of the victims as a human being.” 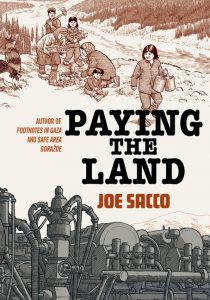 Read an excerpt from Paying the Land here

“It has been more than 10 years since Joe Sacco has produced a full-length work. Not to suggest that one of our greatest living graphic journalists should make a habit of taking that much time off (he should not), but the wait has been worth it. Paying the Land is an immersive exploration of the Northwest Territories’ native Dene people that casts its net across a broad panoply of topics while still hewing to the granular detail (maps, diagrams, footnotes) that make Sacco’s work so rewarding … sympathetic without depriving the Dene of agency … Drawing himself as somewhat more grizzled than in previous works, Sacco continues to use his flustered presence for self-deprecating jabs of humor. Rather than just trying to lighten a dark subject, though, he also does so to undercut the idea that he is an expert. One of Sacco’s greatest gifts is bringing readers into his learning, making us feel that we are somehow part of it rather than passive observers.”

7. The Sky is Blue With a Single Cloud by Kuniko Tsurita
(Drawn & Quarterly)

“… the peculiarities of Tsurita’s stories finds them strange and compelling. Coincidentally, they’re also also abstract enough they often move more like music in how they develop and digress, rather than seeming to follow a plot and a three-act structure. Compiled here, they play off each other like songs an an album, or suites in a symphony … Though the level of ornamental detail feels European, Tsurita’s approach to drawing faces feels closer to the masks of Kabuki theater than celebrity models, and the rest of her drawing follows an approach that favors a neutral distance that allows the reader to consider what is being conveyed without feeling the author’s trying to seduce them … There’s so much life and so much to love in Tsuritisa’s panel-to-panel transitions, where an engraving-indebted approach to black and white drawing renders light shifting from one moment to another, investing slightly shifts in perspective with gravity, while other panels depict the act of flipping a fried egg with both perfect grace and the implicit humor of a non sequitur. These tones existing alongside one another accrue an unforced beauty. Despite the association with realism, for a stylist like Tsurita, there’s no real distinction between detail and the decorative flourish. Any intensity is rendered exquisite. And yet it still feels loose, cartooned, moving from one panel to the next as naturally as you exhale after an inhale.”

“…represented in stark black-and-white panels, these aging moms have nothing to hide: they’re raucous, demanding, and sexual middle-aged women finding enjoyment despite useless partners, disappointing careers, unfulfilled dreams. They text at all hours, use dating apps, swear indiscriminately, steal other women’s boyfriends, occasionally pummel one another with bare fists. Their greatest challenge, like people everywhere at every age, is loneliness—but even that can’t stop Ma’s fearsome mothers from living their best possible lives.” 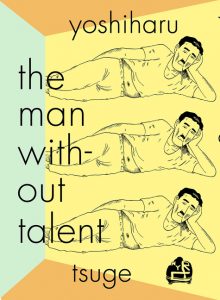 “Tsuge’s quasi-autobiographical series of vignettes are a masterpiece of mundane struggle … Tsuge’s realistic manga carefully balances the beauty of the countryside with the family’s shabby and desperate poverty. The book’s tone is darkly satirical, and Tsuge makes Sukegawa the frequent butt of jokes. Every page feels lived and desperate, yet shot through with poetry, becoming a meditation on finding meaning in life despite trying circumstance.” 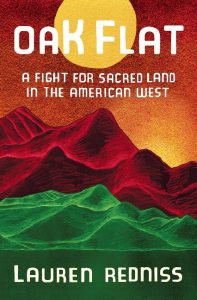 10. Oak Flat: A Fight for Sacred Land in the American West by Lauren Redniss
(Random House)

Listen to an excerpt from Oak Flat here