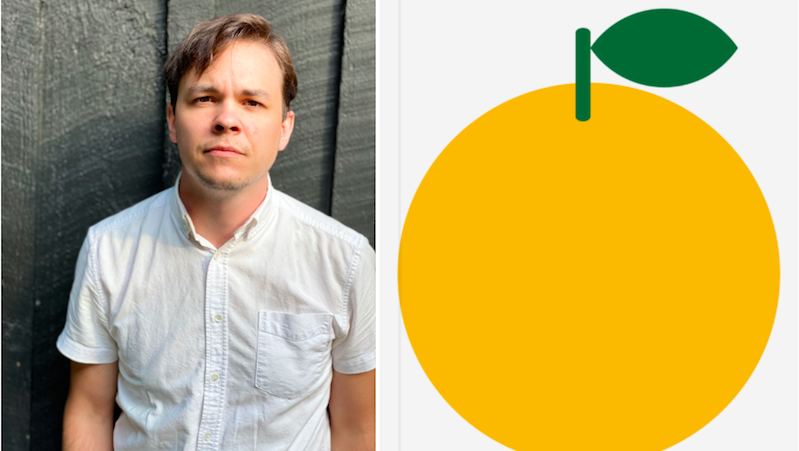 Ted Dodson on Dhalgren, The Twits, and Twenty Thousand Leagues Under the Sea

13 rapid-fire book recs from the author of An Orange

This week, we spoke to the author of An Orange, Ted Dodson.

Ted Dodson: I remember a charmed, school-less afternoon around eight or nine years old, lying on the hardwood floor of my sister’s room, which is notable for the three narrow-set windows that were along its length, and reading Twenty Thousand Leagues Under the Sea in its entirety. I was absolutely devoted from sunrise to sunset. I think my mom brought me a sandwich and some sliced apple, or at least I remember the empty plate. I mostly remember the light in the room and the smell of the book, both dusty but with that fuzziness of time moving at what seems like a speed calibrated to you. These are the reading experiences I treasure most, not when you lose all track of time in complete absorption but when a book is in concert with the world outside of it and you become effortlessly aware of both.

TD: Each summer for the last ten years or so, I’ve set aside a day to read James Schuyler’s The Morning of the Poem in the park.

TD: I am a promiscuous reader, so there are many and are often place-dependent, which is a quirk I get from my mom who has an “upstairs book” and a “downstairs book.” I have no upstairs or downstairs, but I do have “backpack books,” “bedside books,” and “desk books.” The one I’m most taken by right now is Mattilda Bernstein Sycamore’s The Freezer Door. She so compassionately writes the ambivalences, disappointments, and delights of queer embodiment and desire, so much of it circumscribed in vignette it feels as though the body of writing itself is testing the boundaries of its page for vulnerabilities and spaces to flourish, moments to un-define overarching structural authority. That she also elides anarchism and Feminism made me near-embarrassed I hadn’t understood that interchangeability before. This is my bedside book.

TD: My reading life is generally reflected in my writing life. I’m also the type who works on multiple books at once, often taking breaks for months or years on certain poems, translations, or essays. An Orange, however, is literal in how it reflects or converses with what I read. There are poems partly constituted of accounts of favorite books or spirals off from thoughts on what I was reading at the time. For about two years, An Orange consumed a lot of what I was reading and writing—essay, diary, lyric, etc.—as material for the book’s poems. This was a democratizing impulse, to render the materials of my life and writing with a rhetorical equivalency within the self-same patterning of the poems. But as for what other books I would hope An Orange would be constellated with, I can really only hope it fits somewhere among my contemporaries and immediate influences, the work of friends: Alli Warren’s Little Hill, Shiv Kotecha’s The Switch, Corina Copp’s The Green Ray, Simone White’s Of Being Dispersed, Stacy Szymaszek’s Journal of Ugly Sites & Other Journals, the films of Jonas Mekas, this list goes on.

TD: I am about 300 pages into Samuel Delaney’s Dhalgren, a little less than halfway. I started reading it in May or June 2020. It’s so wildly genius. I really don’t know another novel as structurally and narratively mercurial as Dhalgren, going from hard sci-fi to formal and syntactical manipulations to bisexual erotica back to hard sci-fi and so on. But, as I said, I tend to pick up and put books down often, and my attention swapped Dhalgren for something else, and I just haven’t gone back to it yet.

TD: As a high-functioning stoner, I’m preternaturally aligned to having my mind blown. Sometimes a mature reading of a beloved writer’s work will produce a total epiphanic conniption like when I re-read Ashbery’s “The Skaters” while I was in grad school, or I could be confronted with a book that swiftly eviscerates me like Bataille’s wretched The Story of the Eye or eviscerates convention like Tan Lin’s 7 Controlled Vocabularies and Obituary 2004. The Joy of Cooking. Most memorably, however, I’d say it was Stacy Doris. This was just a matter of serendipity. Like, I was in a bookstore, and I pulled from the shelf a copy of her book, The Cake Part, a visionary, hilarious work of translation and adaptation taking materials from the Bibliothèque Nationale, Mirabeau’s Erotika Biblion, and Sergei Eisenstein. This book is incredible on its own, but what blew my mind was what I found when, keen off reading The Cake Part, I read more of Stacy’s work. Her breadth completely stunned me: Conceptualisms, narratives, playwriting, translations, serial constructs, lyric poems, whole books offering so much variety yet so stable, even in their most volatile moments. I also found out that Stacy had passed away in San Francisco earlier in that year. This was 2012. She is remembered as an extraordinary performer and a friend to many.

TD: Akilah Oliver’s A Toast in the House of Friends and Jack Spicer’s After Lorca are my guaranteed cry-inducers. Most recently, Ed Robeson’s City Eclogue. I cry…a lot. Whatever!

TD: Did someone say Bataille? Yeah, sex is great but have you ever driven your friend insane mid-orgy through the power of sheer depravity? I mean, The Story of the Eye’s sex is great in a literary sense, but while it’s delightfully horny, it’s also cold and imagistic. Most recently, Robert Glück’s Margery Kempe—the 1994 book was reissued in 2020 by NYRB—has delivered the most tender (and wrenching), critical, and ecstatic erotics of a book I’ve read. Glück is famously a fantastic writer of sex and desire, along with most of the New Narrative cohort, though Margerey Kempe’s bilateral narratives of the author’s relationship with L. and a 15th century mystic’s, Margerey Kempe, romance with Jesus. There is a surfeit of deliciously written fucking throughout the book, but also moments like the following that capture sex and affect in what feels an entirety:

I make two wishes: to be L.’s lover and to have the freedom to write. I wait a moment for the wishes to come true; at the end of the moment I am older and so separate from others that I feel mutilated. L.’s voice is bright, charming the distance away. “What’s both new and different?” His tone assumes it’s obvious to both of us that he can’t be with me.

TD: I’m a forever fan of Daniel Pinkwater, especially his wacky space odyssey, Borgel, and his Scooby-doo-esque story of vegetal maleficence, The Snarkout Boys and the Avocado of Death, but as far as very favorites go, Roald Dahl’s The Twits takes the top spot. I’m not exactly sure how this is a children’s book with exception that it falls into the classic children’s category of illustrated narratives on the triumph of animals over people. In The Twits, a group of righteous carnival creatures meticulously gaslight a pair of utter cretins, their captors and the titular Twits, into eventually killing themselves. It’s completely demented, and I love it.

TD: I just wish poets were hired to do script punch-ups more often. Is that a thing? Like, we’re here, y’all. Though, I really just want to see poets freed of debt and not exploited in whatever variety of menial work we’re often doing to get by. Also, Dhalgren so I can finish reading it and say the book was better.

TD: NH Pritchard’s The Matrix (1970). People, thankfully, have heard of this and are working to make Pritchard more well-known for the iconoclast he was. Craig Dworkin and Danny Snelson’s Eclipse Archive includes Pritchard in their collection of work in the Black radical tradition, and The Matrix and another of Prichard’s books, EECCHHOOEESS, are being reissued in early 2021 from Primary Information and DABA, respectively.

TD: Anyone who put out a book mid-pandemic can attest to its struggles and unmitigated stresses, but I was so privileged to be company to my partner, Marie-Helene Bertino, as she navigated the entirety of the release of her most recent novel, Parakeet, with near-superhuman grace. Recently on the radio, someone was doing a call-in thing about favorite books of the year, so I called in and said I wanted to talk about Parakeet. They didn’t put me on air. And, yes, it was a shameless attempt to plug Marie’s book (not that it needed it at all—her picture was in the Times this past summer, y’all!—or that the radio people knew I might have an ulterior motive), but it was also entirely genuine. If they hadn’t gone to time with a thin conversation on some celebrity cookbookery, I would have said this: Parakeet read me at the exact right moment, four months into the pandemic when I was totally unaware of how I was destructively compensating for anxiety and the loss of control COVID-19 had brought along with it. Parakeet is especially acute in its dismissal of patriarchal constructs of control, whether these are attendant in gender, class, femininity, or family or are largely more institutional. And I say dismissal instead of challenge or attack or something like that because Marie’s principle character, The Bride, doesn’t attempt to replace any of these things with her own supplemental notion of control. In fact, when faced with her own feelings of helplessness or finding her own agency curtailed, The Bride engages acts of wholeness, understanding, and connection, true anti-girlboss shit (which is to say anti-boss shit of any stripe). It was an analog I desperately needed for my own life, some instructions for what it means to actually live within the wreckage of whatever life you thought you were occupying.

Ted Dodson is the author of An Orange (Pioneer Works / Wonder, 2021), At the  National Monument / Always Today (Pioneer Works, 2016), and Pop! in Spring  (Diez, 2013). His writing has been featured in Hyperallergic, BOMB, Fence, The  Stinging Fly, and The Brooklyn Rail among other publications. He works for BOMB,  is an editor-at-large for Futurepoem, and is a former editor of The Poetry Project  Newsletter. 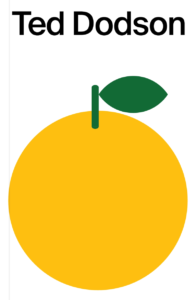