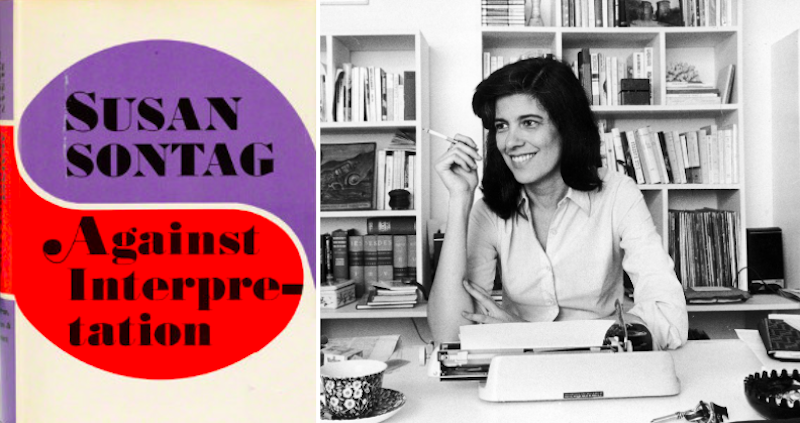 On what would have been her eighty-fifth birthday, we look back at Sontag's iconic 1966 collection of essays, Against Interpretation 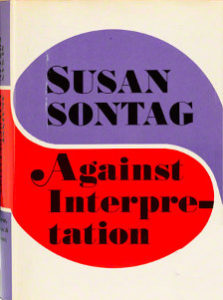 The ideal or the dream would be to arrive at a language that heals as much as it separates.

“…the author of the collection of essays and reviews at hand stands forth as a genuine discovery. Her book, which includes 26 pieces published between 1961 and 1965 in periodicals ranging from Partisan Review to Film Quarterly, is a vivid bit of living history here and now, and at the end of the sixties it may well rank among the invaluable cultural chronicles of these years.

That this is so owes much to the alertness and integrity with which Susan Sontag details her own responses to the more startling and symptomatic esthetic inventions of recent days. These inventions don’t figure, to be sure, in every piece assembled here. A substantial portion of this book is about other books—plain, ordinary, print-and-paper works of Pavese, Sartre, Simone Weil, Leiris, Lukacs, Levi-Strauss. What is more, the critical argument patched on as a unifying line, in introductory and concluding essays, appears to derive less directly from experience with new-wave films, pop art and the like, than from overexposure to certain fringe movements of literary criticism. 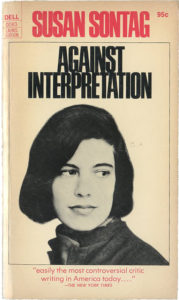 “Competent chatterers about critical things as they are, though, aren’t in short supply these days. What is rare is the writer who has moved beyond the Gee Whiz or See Here response to the new art the observer who breathes naturally in encounters with a Godard film or a nouveau roman and takes as his critical purpose the re-creation of these encounters as known an experienced by the feelings and the imagination. Miss Sontag at her best is such a writer. She doesn’t simply view a Happening, for instance; she inhabits the moment of its ‘performance’ and gives it back to her reader as an inward disturbance as well as a set of odd outward events.

“Her passing remarks on figures as dissimilar as Taylor Mead, Tammy Grimes, the Beatles and Harpo Marx are alive with a sense of what it is like to watch these performers. Her descriptions of the sensations and feelings engaged or disengaged during Brecht plays, good and bad Ionesco, Peter Weiss’s Marat-Sade, and the films of Bresson and Godard are at once subtle and exact. And there are moments at which, pressing toward a perception of the kinds of feeling articulated in a particular esthetic taste, she rises to analysis that is nothing less than exhilaratingly shrewd… 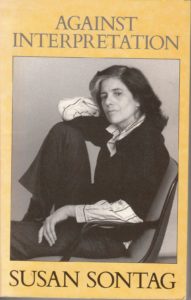 “More piquant than any of this, there is at every moment the achieved character of the observer herself. He ‘I’ of Against Interpretation isn’t a mere pallid, neutral register; it is a self clear enough in outline to provide answers to many of the cultural historian’s bald questions—as, for example, the question who needs the new art and why? Spiky, jealous of her preferences, seemingly exacerbate by the very notion that others may share them, Miss Sontag obliquely confirms that enthusiasts of the new art tend to be people who need badge of difference from the herd. Impatient, restless, her nerve ends visible in sentence after sentence (can’t bear it, can’t stand it), she further testifies that one pleasure offered by the new art is a release from that prison of patience and ploddingness into which traditional art locks its audience.

Finally: suspicious of order, certain beyond doubt that sanity itself is but a cozy lie, she reveals that the new art is, most profoundly, a mode of self-torment—a means by which guilty men who know the real truth of existence (life is meaningless) can punish themselves for finkishly ignoring it and dallying day by day with the comfortable old deceits of good sense. 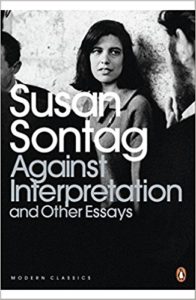 “To make this last point, is, of course, to say that a thoroughly American figure stands at the center of Against Interpretation. The dress is new, true enough, and the images strange. The haunting image is that of a lady of intelligence and apparent beauty hastening along city streets at the violet hour, nervous, knowing, strained, excruciated (as she says) by self-consciousness, bound for the incomprehensible cinema, or for the concert hall where non-music is non-played, or for the loft where cherry bombs explode in her face and flour sacks are flapped close to her, where her ears are filled with mumbling, senseless sound and she is teased, abused, enveloped, deliberately frustrated until—

Until we, her audience, make out suddenly that this scene is, simply, hell, and that the figure in it (but naturally) is old-shoe-American: a pilgrim come again, a flagellant, one more Self-lacerating Puritan. A few readers, mainly swingers, will be vexed by the discovery of this ‘radical juxtaposition,’ for it does rather mock the gospel of ‘liberation.’ But most readers will acknowledge, at the least, that to have brought such a complex figure to life in a collection of essays is a feat. Miss Sontag has written a ponderable, vivacious, beautifully living and quite astonishingly American book.”