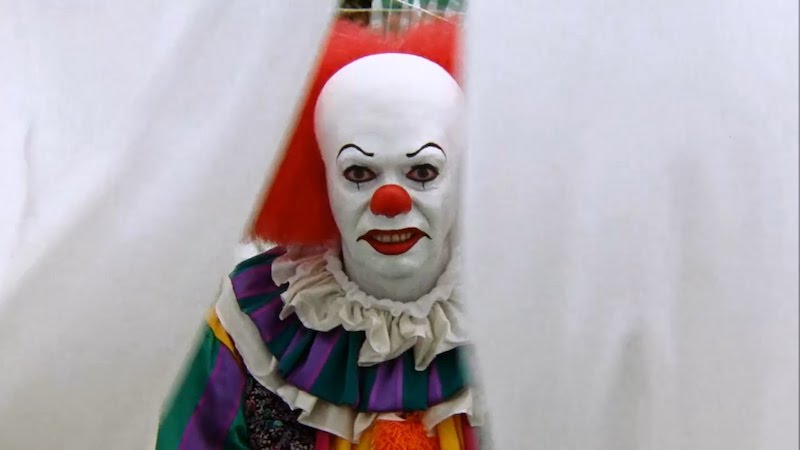 Stephen King's It and the Evil that Haunts America 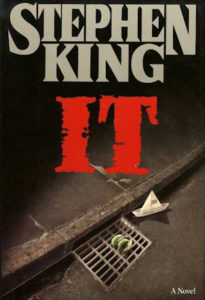 We lie best when we lie to ourselves.

It all begins in 1958, when a 6-year-old boy named Georgie Denbrough floats a little paper boat down the gutter of a thoroughfare in the city of Derry, Me. When the boat disappears into a storm drain, Georgie peers down disconsolately and spies a merry clown holding the boat in one hand and a bunch of brightly colored balloons in the other. Would Georgie like his boat back and a balloon into the bargain? Sure. Georgie reaches out. Shrill screams attract passers-by. Moments later the Denbrough child is found dead in the gutter, with a gaping wound where his arm was once attached to its socket. 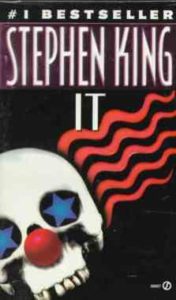 “Flash forward now to 1985. Stanley Uris, a successful Atlanta accountant, gets an after-dinner phone call from a friend in Derry that prompts him to go upstairs, run a bath, climb into it, and slice his wrists with a razor blade, scrawling on the wall the bloody word ‘IT’ as his dying act. But five other former Derry residents reluctantly accept telephoned reminders of a promise they once made as children. They immediately set out for their hometown.

What can be so terrifyingly compelling? It seems that whatever got little Georgie Denbrough back in 1958 is acting up again — indeed that it has been acting up every 27 years or so since anybody can remember, and that whatever the gang of seven did in 1958 to stop it will have to be done again, as the gang once vowed in a ritual of blood. So home go the six to Derry, and forward goes Mr. King’s narrative, jumping back and forth between 1958 and 1985 until we can hardly distinguish the horror of then from the horror of now. 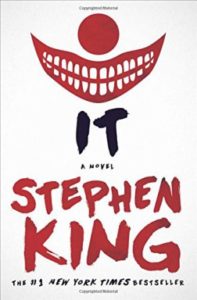 “Mr. King’s huge novel is about a multitude of things. It involves the guilts and innocences of childhood and the difficulty for adults of recapturing them. It questions the difference between necessity and free will. It also concerns the evil that has haunted America from time to time in the forms of crime, racial and religious bigotry, economic hardship, labor strife and industrial pollution.

It is a museum filled with the popular culture of the 1950’s: brand names, rock ‘n’ roll songs and stars, the jokes and routines of childhood in that era. It explores fairy tales, language and literature: One of the six who go back is Georgie Denbrough’s older brother, Bill, who has surmounted his family’s tragedy — or maybe harnessed it — to become a successful writer of horror fiction. It is not only the unknown monstrosity hiding beneath the city of Derry; It is also excrement, the dark, the unconscious, the sex act, and everything else that is frightening or inconceivable to children. 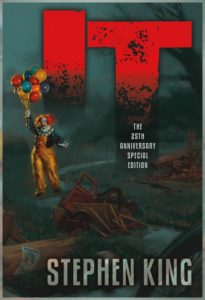 “The novel is filled with every sort of scary set piece that Mr. King is so adept at contriving: nightmarish chases; trips into cellars where monstrous creatures may be lurking; a photograph album that bleeds; a bathtub drain that cackles hideously and ‘gouts’ blood. (I don’t know offhand if it was Mr. King who first revived and revised the verb form of ‘gout’ — whose obsolete meaning, according to the Oxford English Dictionary, was ‘to drop’ or ‘to gutter’ — but blood in these pages gouts everywhere like water gushing from a fire hose.) Such set pieces help to hold our interest in this epic of coprophilia. So do Mr. King’s raw powers as a yarn spinner of horrors — his sense of pace and scene, his almost adolescent affinity for the gross and vulgar. But he has set himself two formidable plot challenges: one is to produce something terrifying enough to justify Stanley Uris’s decision to commit suicide rather than face whatever is lurking in the sewers of Derry; the other is to explain what moved the children to pledge their lives to the city on that fateful day of the blood oath. 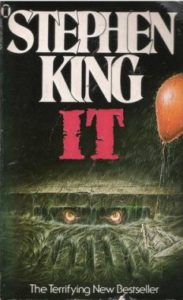 “In neither of these challenges does Mr. King quite succeed. Nothing ever explains why Uris cuts his wrists or why the gang has to reunite. The story moves along, but for all its awesome stage effects, it huffs and puffs and creaks and clanks. It lacks the political vision of The Dead Zone. It misses the logic of Firestarter and Cujo. It wants the brooding, ominous mood of The Shining. It has nothing like the funereal oppressiveness of Pet Sematary. It tries too hard; it reaches for too much; it’s too damn complicated.

Or maybe you simply have to have a thing about drains for It to terrify you the way it was obviously meant to.”