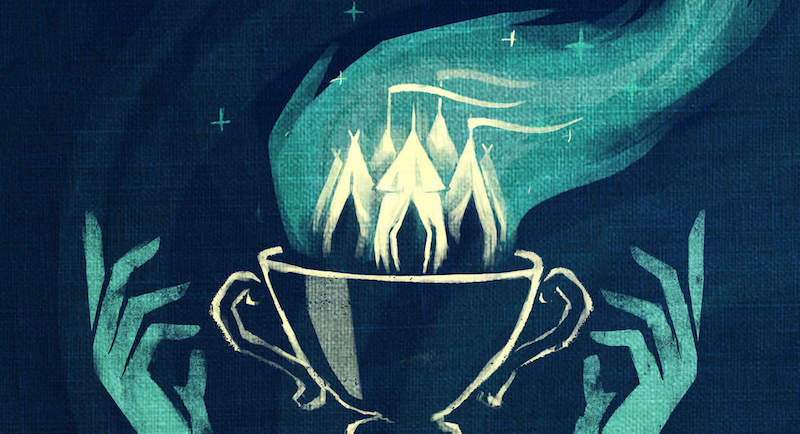 Hogwarts as Never-Never Land: Stephen King on The Goblet of Fire

The master of contemporary American horror on the id of British fantasy, hating The Goonies, and reading Harry Potter while high on painkillers 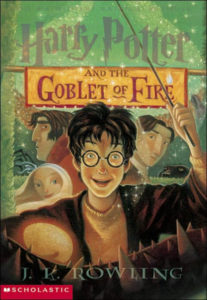 between what is easy and what is right

“I read the first novel in the Harry Potter series, Harry Potter and the Sorcerer’s Stone, in April 1999 and was only moderately impressed. But in April 1999 I was pretty much all right. Two months later I was involved in a serious road accident that necessitated a long and painful period of recuperation. During the early part of this period I read Potters 2 and 3 (Chamber of Secrets, Prisoner of Azkaban) and found myself a lot more than moderately wowed. In the miserably hot summer of ’99, the Harry Potters (and the superb detective novels of Dennis Lehane) became a kind of lifeline for me. During July and August I found myself getting through my unpleasant days by aiming my expectations at evening, when I would drag my hardware-encumbered leg into the kitchen, eat fresh fruit and ice cream and read about Harry Potter’s adventures at Hogwarts, a school for young wizards (motto: ‘Never tickle a sleeping dragon’).

For that reason, I awaited this summer’s installment in J. K. Rowling’s magical saga with almost as much interest as any Potter-besotted kid. I had enjoyed the first three, but had read the latter two while taking enough painkillers to levitate a horse. This summer, that’s not the case. 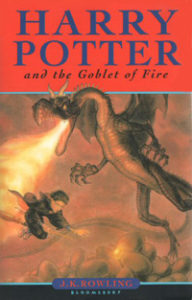 “I’m relieved to report that Potter 4 — Harry Potter and the Goblet of Fire — is every bit as good as Potters 1 through 3. It’s longer, though. Goblet is as long as Chamber and Prisoner combined. Is it more textured than the first three? More thought-provoking? Sorry, no. Are such things necessary in a fantasy-adventure aimed primarily at children and published in the lush green heart of summer vacation? Of course not. What kids on summer vacation want — and probably deserve — is simple, uncomplicated fun. Harry Potter and the Goblet of Fire brings the fun, and not just in stingy little buckets. At 734 pages, Goblet brings it by the lorry load.

The most remarkable thing about this book is that Rowling’s punning, one-eyebrow-cocked sense of humor goes the distance. At 700-plus pages, one should eventually tire of Blast-Ended Skrewts, Swedish Short-Snout dragons and devices like the Quick-Quotes Quill (a kind of magical tape recorder employed by the satisfyingly repugnant Daily Prophet reporter Rita Skeeter), but one never does. At the least this reader did not. Perhaps that’s because Rowling doesn’t dwell for long on such amusing inventions as the Quill, which floats in midair and bursts out with florid bits of tabloid prose at odd moments. She gives the reader a quick wink and a giggle before hustling him or her along again, all the while telling her tale at top speed. We go with this willingly enough, smiling bemusedly and waiting for the next nudge, wink and raised eyebrow. 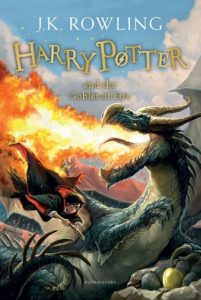 “Now, returning to Hogwarts after attending the Quidditch World Cup, Harry and his friends are excited to learn that the Triwizard Tournament is to be reintroduced after a hiatus of 100 years or so (too many of the young contestants wound up dead, it seems). Aspiring wizards from two other schools (Beauxbatons and the amusingly fascistic Durmstrang Academy, location unknown) have been invited to spend the year at Hogwarts and compete in the contest, which is composed of three beautifully imagined tasks. These can only be performed well by contestants who can solve the riddles that bear on them; both children and students of Greek mythology will enjoy this aspect of Rowling’s tale.

Like the Sorting Hat, one of Rowling’s early ingenious bits of invention, the Goblet of Fire is essentially a choosing device. It’s supposed to spit out three flaming bits of parchment bearing the names of the three contestants in the tournament, one entrant from each school. In a vivid and marvelously tense scene, the Goblet of Fire spits out four parchment fragments instead of three. The fourth, of course, bears the name of Our Hero. Although Harry is supposedly too young to compete in such a dangerous series of tilts, the Goblet has spoken, and of course Harry must step into the arena. If you think young readers won’t lap this up, you never had one in your house (or were one yourself). Adults are apt to be more interested in just how Harry’s name got into the Goblet in the first place. This is a mystery Rowling works out with snap and verve. And, unlike the denouements I remember from the Nancy Drew and Hardy Boys mysteries of my youth, where the culprit usually turned out to be some vile tramp of the lower classes, the solution to the Goblet mystery, like the answers to the Triwizard riddles, struck me as fair enough. 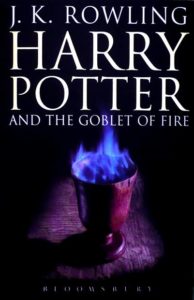 “Along the way, Rowling gives us Harry’s first date (not with the alluring fifth-level dream girl Cho Chang, unfortunately), at least one thought-provoking subplot (involving house-elves who rather enjoy their status as kitchen slaves) and an extremely large dose of adolescent humor (one mildly off-color joke, punning on the word Uranus, will likely go over the heads of most grade-school readers and amuse the brighter junior high school set). There’s also a moderately tiresome amount of adolescent squabbling. Adults can safely speed through these bits; it’s a teenage thing.

Can anyone wonder at the fabulous sales success of these books? The Harry Potter series is a supernatural version of Tom Brown’s Schooldays, updated and given a hip this-is-how-kids-really-are shine. And Harry is the kid most children feel themselves to be, adrift in a world of unimaginative and often unpleasant adults — Muggles, Rowling calls them — who neither understand them nor care to. Harry is, in fact, a male Cinderella, waiting for someone to invite him to the ball. In Potter 1, his invitation comes first by owl (in the magic world of J. K. Rowling, owls deliver the mail) and then by Sorting Hat; in the current volume it comes from the Goblet of Fire, smoldering and shedding glamorous sparks. How nice to be invited to the ball! Even for a relatively old codger like me, it’s still nice to be invited to the ball.

It would be depressing to announce that the best-selling book in the history of the world, a position this book will probably hold only until Potter 5 comes along, is a stinker. Goblet of Fire is far from that. Before Harry appeared on the scene, escape-hungry kids had to make do with R. L. Stine, the uninspired but wildly successful journeyman who inspired the Goosebumps phenomenon. Rowling’s books are better natured, better plotted and better written. They bulge with the sort of playful details of which only British fantasists seem capable: there’s the Whomping Willow, which will smash hell out of your car (and you) if you get too close to it, snack foods like Cauldron Cakes and Licorice Wands and the satisfyingly evil Lord Voldemort (so evil, in fact, that most of Rowling’s characters will only call him ‘You-know-who’). The Dursleys, Harry’s unpleasant guardians, explain the boy’s long absences by telling their friends that Harry attends St. Brutus’s Secure Center for Incurably Criminal Boys. And the book opens with the murder (offstage, don’t worry) of a witch named Bertha Jorkins. Rowling doesn’t exactly come out and say it’s what the unfortunate Bertha deserves for taking her vacation in Albania, but she certainly implies it. 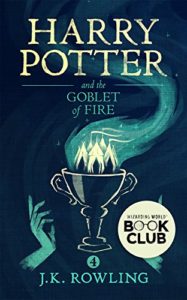 “Is there more going on here than fun? Again, not much. In a good deal of British fantasy fiction, the amusing inventions are balanced by themes of increasing darkness — Tolkien’s Rings trilogy, for instance, in which the fascism of Mordor begins as a distant bad smell on the breeze and develops into a pervasive atmosphere of dread, or C. S. Lewis’s Narnia books, in which the writer’s religious concerns invest what begin as harmless make-believe adventures with a significance that becomes, in the end, almost unbearable (and to this reader, rather tiresome). Taken to its extreme, the id of British fantasy produces a Richard Adams, where the unfortunate talking dogs Snitter and Rowf suffer almost unspeakable hardships and the bear-god Shardik comes to stand for all the promises religion ever made and then broke; where every sunlit field of scampering rabbits conceals its shining wire of death.

In Rowling’s work, such shadows can be perceived, but they are thin shadows, quickly dispelled. Harry’s adventures remain for the most part upbeat and sunny, despite the occasional cold pockets of gruel; more Lewis Carroll than George Orwell. The British fantasy they may actually be closest to is J. M. Barrie’s Peter Pan. Like any school, where the clientele is perpetually young and even the teachers begin to assume the immature psychological characteristics of their pupils, Hogwarts is a kind of Never-Never Land. Yet Harry and his friends show some reassuring signs of growing up eventually. In the current volume there is some discreet necking, and at least a few sorrows and disappointments that need coping with. 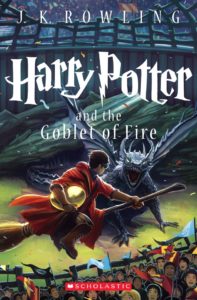 “The fantasy writer’s job is to conduct the willing reader from mundanity to magic. This is a feat of which only a superior imagination is capable, and Rowling possesses such equipment. She has said repeatedly that the Potter novels are not consciously aimed at any particular audience or age. The reader may reasonably question that assertion after reading the first book in the series, but by the time he or she has reached Harry Potter and the Goblet of Fire, it becomes increasingly clear that the lady means what she says. Nor can there be any question that her stated refusal to dumb down the language of the books (the current one is presented with such British terms as petrol, pub and cuppa unchanged) has lent the stories an attraction to adults that most children’s novels simply don’t have.

Not all the news is good. Harry Potter will soon be appearing at a multiplex near you. The initial project is being helmed by Chris Columbus, a filmmaker of no demonstrable ingenuity; one doubts if the director of The Goonies, one of the loudest, dumbest and most shriekingly annoying children’s movies ever made, is up to bringing Rowling’s scatty wit and vibrant imagination to the screen. (I hope, on behalf of the millions of children who love Harry, Hermione and Ron Weasley, that Columbus will prove me wrong.) Fantasy, even that as sturdy and uncomplicated as this Young Wizard’s Progress, is difficult to bring to film, where the wonders are all too often apt to shrink and become banal. Perhaps Harry Potter’s place is in the imaginations of his readers. And if these millions of readers are awakened to the wonders and rewards of fantasy at 11 or 12 . . . well, when they get to age 16 or so, there’s this guy named King.”