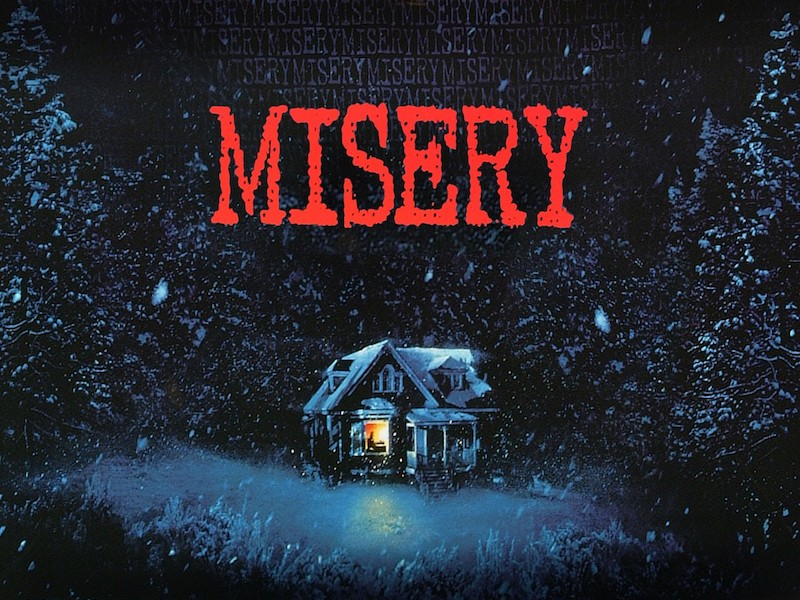 "Sooner or later, he says, 'the sound of my typewriter will cause her to come after me.'" 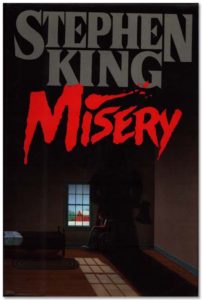 “In Danse Macabre, Stephen King, discussing grist for the writer’s mill, talks about a dream that plagues him when he’s stressed. It’s about a homicidal madwoman inhabiting a house in which he is busily writing. Sooner or later, he says, ‘the sound of my typewriter will cause her to come after me.’ When she finally comes it is ‘like a horrid jack from a child’s box, all gray hair and crazed eyes, raving and wielding a meat-ax.’ Well, there, in a nutshell, is the plot of this, Stephen King’s latest, most heavily autobiographical and funniest work.

“Annie is as round a character as they come, riddled with believable contradictions. She’s cruel, yes, but also, as Paul describes her, ‘strangely prim.’ She won’t take money from his wallet, for instance, but will hand it to him instead. And her objection to Paul’s new manuscript — the one that Paul thinks of as a real novel, book award material, the one that’s going to free him from the whole historical romance biz — is that ‘Every other word is that effword!’ Annie herself says things like, ‘You dirty bird.’ Her favorite adjective is ‘cockadoodie.’ Annie proves positive King’s dictum (again in Danse Macabre) that humor is implicit in horror.

If any of the above might lead you to believe there isn’t anything really scary in all of this, you’re wrong. Stephen King proves his power, in part with what he himself has called ‘the gross out factor,’ but also in more respectable ways, through solid character delineation and terrifying insight. Paul’s examples of ‘radical reader involvement’ with fictional characters are superb examples of both.

“In addition to being able to scare the reader breathless, he is able, in this book, to say a tremendous amount about writing itself, about its ‘deep and elemental drawing power,’ its letdowns, its challenges.

“On the challenges — or maybe I should say the triumphs — we have Paul’s confession cum boast: ‘There’s a million things in this world I can’t do. Couldn’t hit a curve ball, even back in high school. Can’t fix a leaky faucet. Can’t roller-skate or make an F-chord on the guitar that sounds like anything . . . I have tried twice to be married and couldn’t do it either time. But if you want me to take you away, to scare you or involve you or make you cry or grin, yeah. I can. I can bring it to you and keep bringing it until you holler uncle. I am able. I CAN.’ Paul also provides a better lesson on plot than the reader is likely to get in any accredited college. The writer of Misery so clearly delights — and we do too — in his own virtuosity. Like the writer in Misery, he can bring it to you and keep bringing it to you and there isn’t a one of us anywhere near to hollering uncle.”