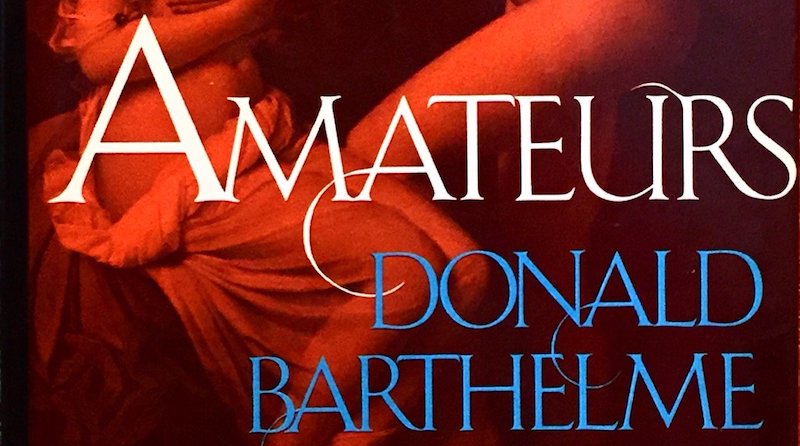 "Some of these are funny, some amusing, some flat, some nasty" 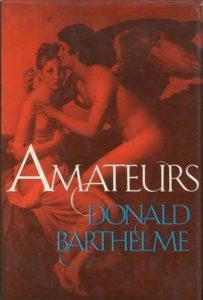 The privileged classes can afford psychoanalysis and whiskey.

Whereas all we get is sermons and sour wine.

This is manifestly unfair. I protest, silently.

“[Barthelme] possesses the most distinctive and influential literary style in the avant?garde (or formalistic) branch of contemporary American fiction. ‘Barthelme has managed to place himself in the center of modern consciousness,’ wrote William H. Gass. He is ‘one of the handful of American writers who are working to replenish and extend the art of fiction,’ wrote Richard Gilman. If he has not attained the stature or public recognition of Nabokov or Pynchon or John Barth—his books have never been belt sellers, and his resistance to storytelling probably insures they never will be—Barthelme at 45 enjoys a secure reputation as a genuine original, a technician nonpareil. He is a miniaturist not unlike Joseph Cornell, a pop artist like Warhol or Rauschenberg, whose camp extravaganzas and ironic murals first filled the galleries when Barthelme began to publish back in the early 1960’s. (Before coming to New York, he’d been a museum director in Houston.)

Here is quintessential Barthelme, the opening of his story ‘The Indian Uprising,’ from Unspeakable Practices, Unnatural Acts (1968):

‘We defended the city as best we could. The arrows of the Comanches came in clouds. The war clubs of the Comanches clattered on the soft, yellow pavements. There were earthworks along the Boulevard Mark Clark and the hedges had been laced with sparkling wire. People were trying to understand. I spoke to Sylvia. ‘Do you think this is a good life?’ The table held apples, books, long?playing records. She looked up. “No.” ‘

But Barthelme’s greatest debts are not to the art world or to camp but to Gogol and Kafka and especially Borges. His true American ancestor is S. J. Perelman, his predecessor at The New Yorker, where most of Barthelme’s stories first appear. But Perelman would never write such fiction as ‘Brain Damage’ or ‘Views of My Father Weeping’ or ‘Kierkegaard Unfair to Schlegel’ or ‘At the Tolstoy Museum’ or ‘The Dead Father.’ Perelman’s antic haymakers spring from the irrepressible green id, the old Adam (Groucho Marx) who screams ‘hands off!’ to mass culture. Barthelme, forty years and three wars later, has no such angry all?American optimism. For Barthelme we’re all trapped in culture, top to bottom, inside and out, highbrow and low, mired in the Oedipus complex, chattering clichés, isolated, alienated prattling consciousnesses—no green leaf of freedom within, no exit in sight. 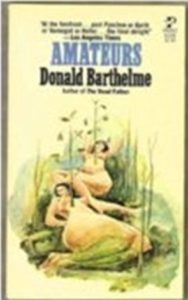 “In this he seems a New York cousin to Samuel Beckett. But Beckett is always the bleak modernist, the ‘stoic comedian,’ full of serious stuff, high art, even the jokes in earnest, absurd always spelled with a capital A. Barthelme is funnier, even silly, a veritable squirrel of wit, collecting bits of verbal trash and customized consumer culture junk from the blather and bump, of New York city life. It’s as if Beckett’s ashcans had been rounded up to serve as ornamental vases or cocktail party favors.

Barthelme’s stories are assemblages: fragments of conversations, monologues, historical and literary snapshots, glimpses of domestic strife, the burdens and groans of urban child?raising and sexual activity. Many have little nervous bursts of violent action—slaps, cuts, gashes, a quick flash—that interrupt the deadpan descriptions and lists of artifacts and urban totems, the samples of technical jargon and intellectual nattering. At his best—in the two story collections Unspeakable Practices, Unnatural Acts and City Life and in the section ‘A Manual for Sons’ in his novel The Dead Father—Barthelme’s collages have a poignant, ruminative undertone that gives the flickering juxtapositions a kind of nihilistic sheen that is beautiful and moving. He can be extraordinarily intelligent and poised—a Pierrot on skates. And yet he sometimes seems content to coast along, relying on his perfect pitch and fine collector’s eye.

“Unhappily, this new collection of 20 stories is, for Barthelme, relatively weak. It would delight, astonish and perplex if it had come from any other writer. There are some very funny things in it. A class at a progressive New York elementary school is plagued by ill luck: everything from the plants and gerbils to a stray puppy and a Korean orphan the class adopts just dies on them. At the end the children are imploring the teacher, ‘. . . please, please make love with Helen [the teaching assistant], we require an assertion of value, we are frightened. I said that they shouldn’t be frightened (although I am often frightened) and that there was value everywhere. Helen came and embraced me. I kissed her a few times on the brow. We held each other. The children were excited. There was a knock on the door, I opened the door, and the new gerbil walked in. The children cheered wildly.’

“Some of these are funny, some amusing, some flat, some nasty. Almost every one contains a flawless sentence or two, But there’s much less variety and kaleidoscopic color in these stories, fewer voices, fewer threads combining, than in Barthelme’s best work. And there are times when Barthelme resorts to violent fantasy to keep things lively, as if the language weren’t enough.

“Narrow peepholes show partial truths; a single tone is not a melody, no matter how pure it may be. A style is not a body of work. Nabokov and Pynchon are so much larger, so various, so historical. In several of his earlier books Barthelme commanded a great range of voices and allusions; he seemed to blend history, personal life, the comedy of manners and verbal detritus into a comic 60’s wasteland. It’s disheartening to see him here often coasting on his style, for a style can become a habit, a nervous tic, no longer responsive to experience, but self?generating, selffulfilling, self ? reflexive, a closed circuit. White noise.”