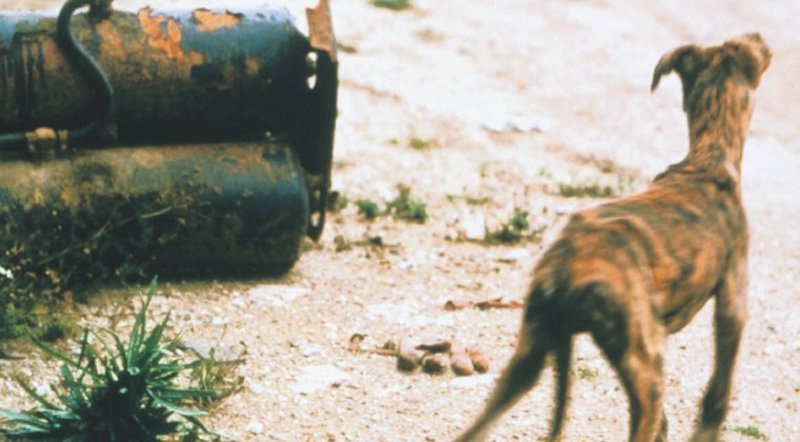 To mark the occasion, let’s look back at some of the earliest reviews of Disgrace, the novel for which Coetzee won his second Booker in 1999 and which has become, in the two decades since its publication, arguably the author’s most famous work.

Disgrace tells the story of fiftysomething English professor David Lurie, who, accused of sexual misconduct with one of his students and relieved of his teaching position, flees Cape Town to go live with his daughter on the Eastern Cape. What follows is a trenchant inquiry into the nature of salvation and self-destruction, and a grim portrait of life in post-Apartheid South Africa. 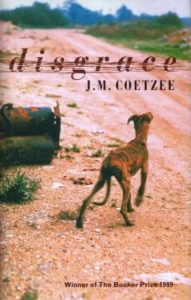 “When all else fails, philosophize.”

“The novel may not inherently be a dialectical form, but readers are so used to a synthesising process that they may detect one without help from the author. JM Coetzee’s quietly deceptive new novel exploits this reflex, with a narrative that belongs to two opposite types simultaneously, revealing its true allegiance only on the last page—in fact the last sentence.

David Lurie, a divorced university professor in his fifties, leaves Cape Town in disgrace to stay with his daughter Lucy on her smallholding in the Eastern Cape. What follows is somehow simultaneously a story of redemption and of collapse, just as a famous optical illusion is simultaneously a duck and a rabbit, but can only be seen at any one moment as one or the other. The reading mind responds to the possibilities in disconcerting alternation.

“Those who require narratives of healing will find plenty of material from which to construct one: Lurie does some physical work for a change and comes to feel a connection with animals. He helps at a clinic of the Animal Welfare League and supervises the disposal of dogs which have been put down, briefly taking charge of a hospital incinerator each week … But there is also an opposite story, not running parallel to the other but built from the same set of materials. In this narrative, country life is not therapy but ordeal, not a pastoral but a war of attrition. In the new South Africa, the man who was once the kaffir calls the shots. His help must be asked for and his protection sought, particularly by a woman living alone, and it may be that his ambition is to take over the land rather than share it. All this is regarded as just, or at least historically inevitable, but there are patterns that seem to magnify and distort the minor disgrace that did for Lurie in the city; oppression from someone whose role is to protect, sexual predation without even his excuses.

Any novel set in post-apartheid South Africa is fated to be read as a political portrait, but the fascination of Disgrace—a somewhat perverse fascination, as some will feel—is the way it both encourages and contests such a reading by holding extreme alternatives in tension. Salvation, ruin. Even a single paragraph can accommodate the transformation of hope into its opposite.” 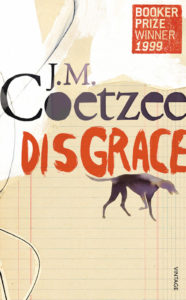 “There is much one could say about this brief but oddly expansive novel, about the range of concerns that Coetzee has woven seamlessly together. There is Lurie’s attempt, as a specialist in Romantic poetry, to write a long-planned work on Byron, in which he finds himself adopting the voice of the poet’s discarded mistress. There is a profound meditation on another kind of otherness, on the lives and the rights of animals, a topic Coetzee has explored in a recent volume of essays—only here that meditation takes the form of the punishment and salvation that Lurie finds at Bev’s animal shelter, helping her to put down abandoned dogs, holding them ‘as the needle finds the vein and the drug hits the heart and the legs buckle and the eyes dim.’ I could note the way Coetzee makes us understand but not sympathize with Lurie’s intellectual arrogance and incorrigible desire, and could then compare him to his child: each is beyond stubborn, but the daughter is marked by an integrity that her father knows he cannot claim for himself. And I could point to the stark and even schematic armature of the plot that links them, a plot in which what Lurie has in some sense done to another man’s daughter is trebly visited on his own.

There is more in Disgrace than I can manage to describe here. But let me end by suggesting Coetzee’s most impressive achievement, one that grows from the very bones of the novel’s grammar. Lurie thinks of himself as having spent his career ‘explaining to the bored youth of the country the distinction between drink and drink up, burned and burnt. The perfective, signifying an action carried through to its conclusion.’ Disgrace is, however, written in the present tense, and its title denotes a continuing condition. Disgrace continues. And so do the characters’ lives, which at the end of the book remain unresolved and unfinished, their problems and possibilities still open.” 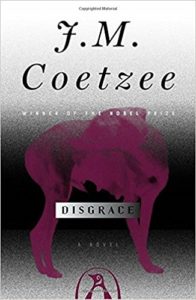 “In his sober, searing and even cynical little book Disgrace, J.M. Coetzee tells us something we all suspect and fear—that political change can do almost nothing to eliminate human misery. What it can do, he suggests, is reorder it a little and half-accidentally introduce a few new varieties … Disgrace is Coetzee’s first book to deal explicitly with post-apartheid South Africa, and the picture it paints is a cheerless one that will comfort no one, no matter what race, nationality or viewpoint.

“Coetzee has always situated his characters in extreme situations that compel them to explore what it means to be human, and before this novel is over, David must endure both psychological abasement and physical torment. But Coetzee has never before asked so clearly what it is not to be human. Later in the novel, after David has fallen into disgrace and fled Cape Town for his daughter Lucy’s remote farm, she tells him, ‘This is the only life there is. Which we share with animals.’

“There is something fundamentally cryptic and unsummarizable about Disgrace, but I read it as an almost metaphysical journey from this Romantic variety of love to the harsher, leaner strain David eventually learns from life on and around Lucy’s farm … If David actually reclaims some dignity by the end of Disgrace, it is only because he gives up everything, gives up more than a dog ever could—his daughter, his ideas about justice and language, his dream of the opera on Byron and even the dying animals he has learned to love without reservation, without thought for himself.”