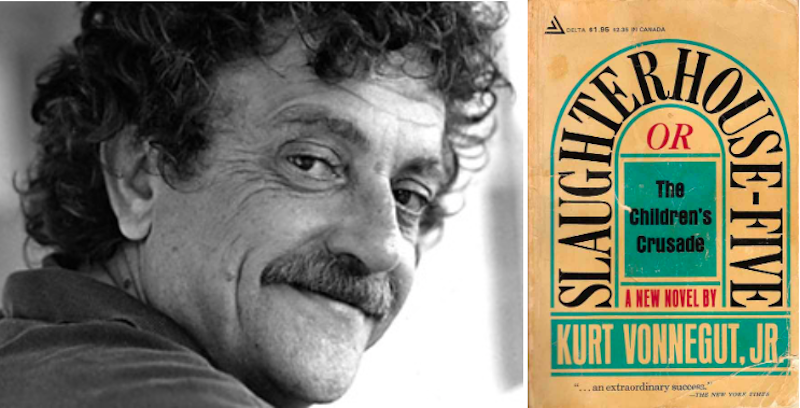 Slaughterhouse-Five and the 20th-Century Apocalypse 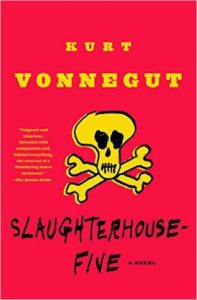 Everything was beautiful and nothing hurt.

“Kurt Vonnegut Jr., an indescribable writer whose seven previous books are like nothing else on earth, was accorded the dubious pleasure of witnessing a 20th-century apocalypse. During World War II, at the age of 23, he was captured by the Germans and imprisoned beneath the city of Dresden, ‘the Florence of the Elbe.’ He was there on Feb. 13, 1945, when the Allies firebombed Dresden in a massive air attack that killed 130,000 people and destroyed a landmark of no military significance.

Next to being born, getting married and having children, it is probably the most important thing that ever happened to him. And, as he writes in the introduction to Slaughterhouse-Five, he’s been trying to write a book about Dresden ever since. Now, at last, he’s finished the ‘famous Dresden book.’

In the same introduction, which should be read aloud to children, cadets and basic trainees, Mr. Vonnegut pronounces his book a failure ‘because there is nothing intelligent to say about a massacre.’ He’s wrong and he knows it.

Kurt Vonnegut knows all the tricks of the writing game. So he has not even tried to describe the bombing. Instead he has written around it in a highly imaginative, often funny, nearly psychedelic story. 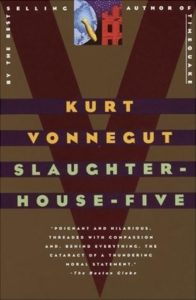 “The odd combination of fact and fiction forces a question upon the reader: how did the youth who lived through the Dresden bombing grow up to be the man who wrote this book? One reads Slaughterhouse-Five with that question crouched on the brink of one’s awareness. I’m not sure if there’s an answer, but the question certainly heightens the book’s effects.

“Now there are two things I haven’t yet told you about Billy Pilgrim, and I’m hesitant to do so, because when I tell you what they are you’ll want to put Kurt Vonnegut back in the science-fiction category he’s been trying to climb out of, and you’ll be wrong.

First, Billy is ‘unstuck in time’ and ‘has no control over where he is going next.’ ‘He is in a constant state of stage fright…because he never knows what part of his life he is going to have to act in next.’

This problem of Billy’s enables Mr. Vonnegut to tell his story fluidly, jumping forward and backward in time, free from the strictures of chronology. And this problem of Billy’s is related to the second thing, which is that Billy says that on his daughter’s wedding night he was kidnapped by a flying saucer from the planet Tralfamadore, flown there through a time warp, and exhibited with a movie star named Montana Wildhack. 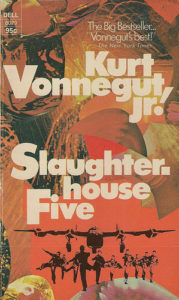 “I know, I know (as Kurt Vonnegut used to say when people told him that the Germans attacked first). It sounds crazy. It sounds like a fantastic last-ditch effort to make sense of a lunatic universe. But there is so much more to this book. It is very tough and very funny; it is sad and delightful; and it works. But is also very Vonnegut, which mean you’ll either love it, or push it back in the science-fiction corner.”