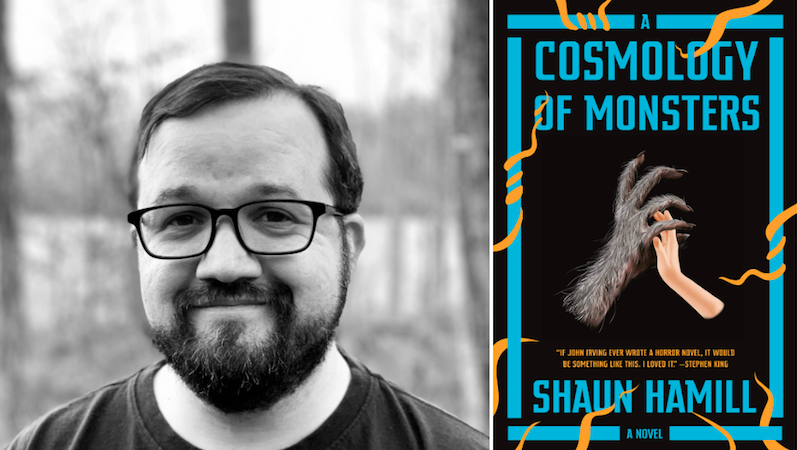 This week, we spoke to A Cosmology of Monsters author Shaun Hamill.

Shaun Hamill: Superfudge by Judy Blume. I probably read it at least a dozen times in grade school.

SH: Jonathan Strange and Mr Norrell by Susanna Clarke. It’s got that perfect mix of magic and danger, and its world feels rich and realized. I would give my left arm to create a world half so wonderful.

SH: The Vampire Lestat by Anne Rice. It’s a novel narrated by a villain who wishes he was a hero, and tries to show you how he tiptoed down the steps to Hell with the best intentions. That confessional/justification narrative was a big influence on A Cosmology of Monsters.

SH: The Books of Blood, Volume 5 by Clive Barker.

SH: The only book that ever made me cry was The Night Circus by Erin Morgenstern. It was a surprise—while I enjoyed the entire book, the closing passage grabbed me by the heart and clenched hard.

SH: The Return by Rachel Harrison. It was published in March of this year and it’s a fantastic horror novel about millennial women and friendship at a creepy hotel in the Catskills. Aside from having a wonderful narrator and great atmosphere, the climax is a genuine heart-stopper. I’m so excited to share this book, and to see what she does next.

SH: The Water-Method Man by John Irving. It’s his second novel, but I think by far his funniest.

SH: I wish Lev Grossman’s The Magicians had been published while I was still in school. I loved it as an adult, but I think teenage me would have been obsessed.

SH: I had to read The Scarlet Letter in high school. I hated it so much I considered giving up AP English just to get away.

SH: Bleak House by Charles Dickens, which I bought because Guillermo del Toro named his house after the book

SH: The Witching Hour by Anne Rice has several (I’m not talking about all the incest, but the love scenes between the romantic leads in the book).

SH: I feel like I’ll insult whoever I choose to shout-out. That said, I love S.P. Miskowski’s I Wish I Was Like You, as biting and funny and sexy and sad a grunge-era ghost story as you could hope for.

SH: Boring-ass answer: To Kill a Mockingbird by Harper Lee. Shocking, I know.

SH: I always have a few books going at once. Right now I’m reading:

The Subtle Knife by Philip Pullman

Monster, She Wrote by Lisa Kroger and Melany Anderson

SH: I just finished The Golden Compass last week and I’m still in awe over that one.

SH: I’ve been making my way through Clive Barker’s Books of Blood and I think this series would make an amazing anthology series. (I also wouldn’t mind if someone wanted to take a crack at my own book!).

A native of Arlington, Texas, Shaun Hamill holds an MFA from the Iowa Writers’ Workshop. He lives in the dark woods of Alabama with his wife, his in-laws, and his dog. A Cosmology of Monsters is his first novel.