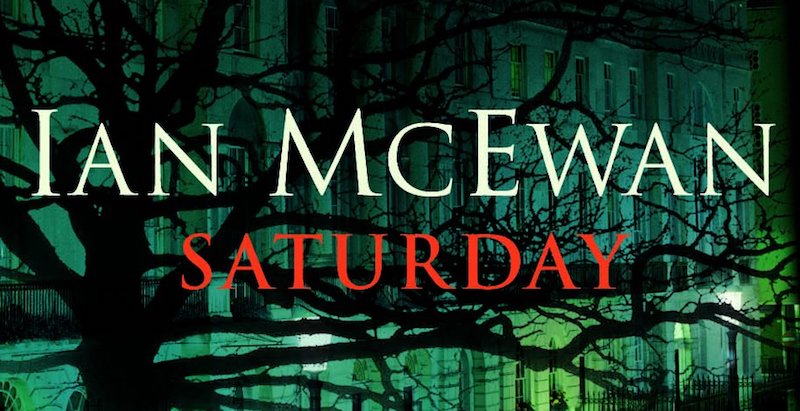 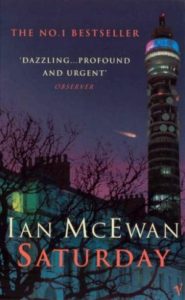 “The novel is set on a specific and momentous day, February 15, 2003, the day when hundreds of thousands of people took to the streets of London to protest the imminent war on Iraq. Perowne wakes early, some hours before dawn. Standing at the window in his bedroom, he sees an airliner with an engine on fire streaking through the night sky in the direction of Heathrow. Although his mood is euphoric—he is at the top of his career, he loves his wife and still finds her desirable, his house is handsome and secure, and that night there is to be a loving family reunion—Perowne’s thoughts, like the thoughts of all of us in these days and nights, have been straying over the millenarian threats that have arisen against the soft target which is the developed West.

“It happens occasionally that a novelist will lose his sense of artistic proportion, especially when he has done a great deal of research and preparation. I have read all those books, he thinks, I have made all these notes, so how can I possibly go wrong? Or he devises a program, a manifesto, which he believes will carry him free above the demands of mere art—no deskbound scribbler he, no dabbler in dreams, but a man of action, a match for any scientist or soldier. He sets to work, and immediately matters start to go wrong—the thing will not flow, the characters are mulishly stubborn, even the names are not right—but yet he persists, mistaking the frustrations of an unworkable endeavor for the agonies attendant upon the fashioning of a masterpiece. But no immensity of labor will bring to successful birth a novel that was misconceived in the first place. 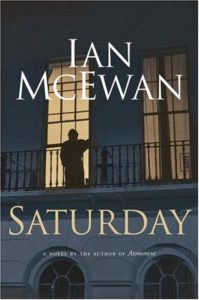 “Something of the kind seems to have happened here. Saturday is a dismayingly bad book. The numerous set pieces—brain operations, squash game, the encounters with Baxter, etc.—are hinged together with the subtlety of a child’s Erector Set. The characters too, for all the nuzzling and cuddling and punching and manhandling in which they are made to indulge, drift in their separate spheres, together but never touching, like the dim stars of a lost galaxy. The politics of the book is banal, of the sort that is to be heard at any middle-class Saturday-night dinner party, before the talk moves on to property prices and recipes for fish stew. There are good things here, for instance the scene when Perowne visits his senile mother in an old-folks’ home, in which the writing is genuinely affecting in its simplicity and empathetic force. Overall, however, Saturday has the feel of a neoliberal polemic gone badly wrong; if Tony Blair—who makes a fleeting personal appearance in the book, oozing insincerity—were to appoint a committee to produce a ‘novel for our time,’ the result would surely be something like this.

It affords no pleasure to say these things. Ian McEwan is a very good writer; the first half of Atonement alone would ensure him a lasting place in English letters. In this new book, however, he has stumbled badly. This would be of little consequence outside the book-chat columns were it not for the arrogance which Saturday displays. 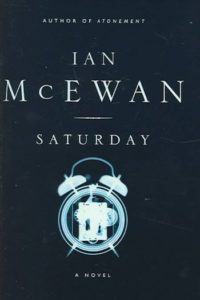 “Another source of dismay, one for which, admittedly, Ian McEwan cannot be held wholly accountable, is the ecstatic reception which Saturday has received from reviewers and book buyers alike. Are we in the West so shaken in our sense of ourselves and our culture, are we so disablingly terrified in the face of the various fanaticisms which threaten us, that we can allow ourselves to be persuaded and comforted by such a self-satisfied and, in many ways, ridiculous novel as this?”