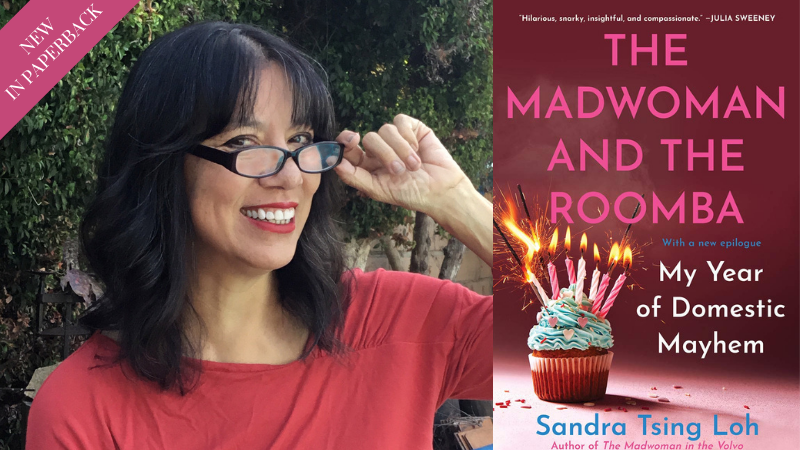 This week, we spoke to the author of The Manwoman and the Roomba (out now in paperback), Sandra Tsing Loh.

Sandra Tsing Loh: Charlotte’s Web. My second grade teacher Miss Thompson read it aloud to our rapt class. Towards the end, I was holding my breath so tightly I dared not go to the bathroom for fear of missing a word. After everyone else left, my friend Amy helped me sop up an ocean of pee with paper towels, agreeing that sometimes water did indeed “suddenly fall from the tiles in the ceiling.” She was a true friend.

STL: I used to say it was Anna Karenina (though I would skip the Levin farming chapters). A gloomy writer who drank my way through much of the pandemic, frankly, the most dog-eared book here continues to be Dr. Atkins’ Diet Revolution. I’ve cycled weight since teenhood, so re-reading it is a comforting ritual. (PS: Unlike Djuna Barnes’ daily bottle of whiskey—0 carbs—my poison was rose—20!)

STL: The Madwoman and the Roomba is in its own way a humble heterosexual homage to Jonathan Ames’ The Extra Man (love, love!). Henry Harrison warding off fleas by splashing cologne around his ankles: gay, straight or other, for we “Bohemians” of a certain age who’ve never managed to convert our art into millions, the comedy of splattered tie plus shitty car feels very much like my Los Angeles.

STL: Alice Sebold’s The Lovely Bones. Cried on page one. Terrified. Read it on a plane. Called up my children afterwards—and terrified them because I was hysterical. How Sebold wove together the terror with the humor and the humanity continues to stun me. (I re-read it every so often). An astonishing book.

STL: Erika Schickel’s The Big Hurt (out August). This barnstorming memoir details, among many other things, Schickel’s extramarital affair with LA’s most famous noir writer (unnamed, but you can Google this Beethoven-obsessed “demon dog” in 30 seconds flat). Here’s a dishy look at literary LA that will have bookish sorts grabbing their highlighters/calling their lawyers, with deeper points about art, love, and longing.

STL: The Fault in Our Stars by John Green. A few years ago, I found my 16 year-old daughter Madeline reading it in her room and weeping. “Oh my God, I cried in this chapter near the end,” she wailed, then continued in disbelief, and a kind of horror, “and then in the next chapter, I cried again!” I borrowed it, read it and (particularly when Augustus breaks down at the end) became completely unglued.

STL: All of the Leatherstocking Tales by James Fenimore Cooper, but that’s almost too easy. There are no passionate defenders I know of of Natty Bumppo and his so-called frontier “adventures.” (Dammit, I just Googled to be sure and apparently James Fenimore Cooper’s work was the inspiration for Last of the Mohicans starring Daniel Day Lewis. Who knew? I’ll try to unsee this now.)

STL: Oh God. In summers growing up, my German mother had a satchel of thick sandy paperbacks she used to tote to and fro from the beach. I remember Tai-Pan by James Clavell—never apparently read—but also Hawaii by James Michener, Bride of Pendorric by Victoria Holt, and Moulin Rouge by Pierra La Mure (about Toulouse Lautrec—sure!). I cringe to say which few pages in the latter three were well-thumbed.

STL: Glinda of Oz. Here’s a fantastic Oz book driven by female characters: Glinda the Good, Ozma of Oz, Dorothy from Kansas, evil sorceress Co-ee-oh and Reera the Red, “the powerful Yookoohoo.” Impervious to humans, neither bad nor good, a supposedly attractive Reera transforms herself into a gray ape by day so she doesn’t have to bother with clothes. That’s but one delightful detail: I wonder who really wrote this?

STL: Pearl S. Buck’s Pavilion of Women. Logline: On her 40th birthday, aristocratic Madame Wu decides to “retire” from marriage by finding her husband a young concubine. What could go wrong, in her great house of 60 souls?  Like, everything! (It turns out there’s an art and science to choosing the right concubine.) I see Crazy Rich Asians meet Bridgerton meets Downton Abbey! Let’s make this thing!

Sandra Tsing Loh is a writer and performer. Her work has been heard on NPR’s Morning Edition and This American Life. Her book The Madwoman in the Volvo was a New York Times Notable Book of 2014. Loh lives in Pasadena, California. 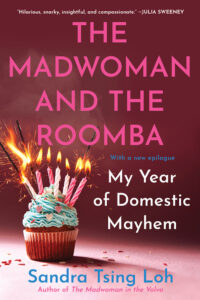 Sandra Tsing Loh’s The Madwoman and the Roomba is out this month in paperback from W. W. Norton & Company