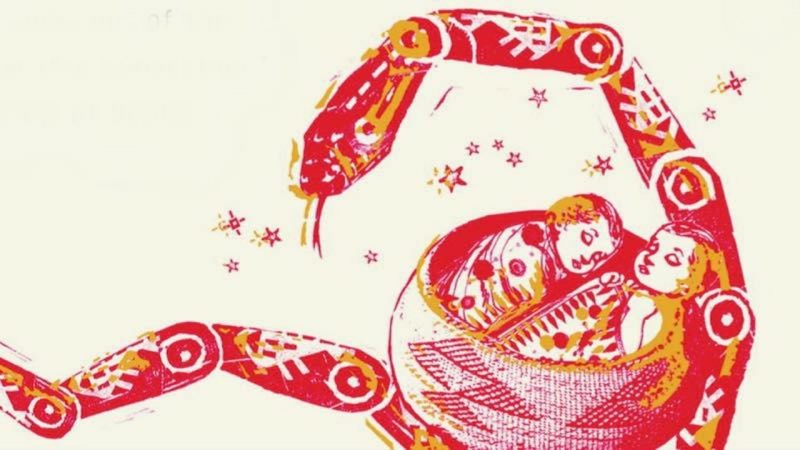 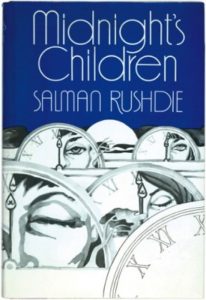 To understand just one life, you have to swallow the world.

“If I am to do more than describe my pleasure in this book, if I am to summarize and interpret, I would have to start by saying that Midnight’s Children is about the narrator’s growing up in Bombay between 1947 and 1977 (and about the 32 years of his grandparents’ and parents’ lives before that). It is also a novel of India’s growing up; from its special, gifted infancy to its very ordinary, drained adulthood. It is a record of betrayal and corruption, the loss of ideals, culminating with ‘The Widow’s’ Emergency rule. As a growing-up novel with allegorical dimensions, it will remind readers of Augie March and maybe of Gunter Grass’s The Tin Drum, Laurence Sterne’s Tristram Shandy, and Celine’s Death on the Installment Plan as well as the less-portentous portions of V.S. Naipaul. But it would be a disservice to Salman Rushdie’s very original genius to dwell on literary analogues and ancestors. This is a book to accept on its own terms, and an author to welcome into world company.

“The extravagance of Mr. Rushdie’s inventions will call to mind the hovering presence of Gabriel Garcia Marquez; call it a tropical synchronicity … As a Bombay book, which is to say, a big-city book, Midnight’s Children is coarse, knowing, comfortable with Indian pop culture and, above all, aggressive. Salman Rushdie assumes that the differences between Colaba and Chembur are as important, and can be made as interesting, as the differences between Brooklyn and The Bronx … Midnight’s Children sounds like a continent finding its voice.”

“Of course there are a few false notes. There is a shorter, purer novel locked inside this shaggy monster. A different author might have teased it out, a different editor might have insisted upon it. I’m glad they didn’t…The flow of the book is toward the integration of a dozen strongly developed narratives, and in ways that are marvelous to behold, integration is achieved. The myriad personalities of Saleem, imposed by the time, place and circumstance of his extraordinary birth, are reduced to a single, eloquent, ordinary soul. The flow of the book rushes to its conclusion in counterpointed harmony: myths intact, history accounted for, and a remarkable character fully alive.” 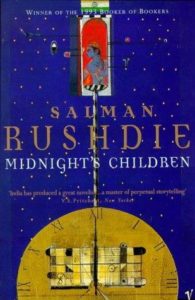 “Since the subject of Salman Rushdie’s novel is the progress of the political juggernaut through the Indian subcontinent—the juggernaut being literally a religious procession taken through the land in celebration, although said to leave behind a wake of destruction—one might expect a dark and somber treatise. If is nothing of the sort. One the contrary, Midnight’s Children burgeons with life, with exuberance and fantasy. If has the same effect on the eyes and the ears as a magnificient circus performance—a scene that is brilliant with color, zest, daredevilry and loud bravado. The language is as full and copious as a flood or fire of tremendous proportions. If Midnight’s Children is sprawling and untidy, then it shares these characteristics with such natural phenomena. If there are many deaths and acts of destruction in the novel, then every death seems merely to fertilize the Indian soil so that 10 heads spring up in the place of the one that rolled. If the last third of the book reveals a slight dwindling of the creative spring, then this is a part of the great design, for by then Rushdie’s hero claims to be ‘disconnected, unplugged, with only epitaphs left to write’ and ends, resignedly: ‘New myths are needed; but that’s none of my business.’

“Yet nothing is predictable—the fantastic and the earthy follow each other about in a comic dance, as do the tragic and the farcical. Rushdie continually plays tricks on the reader … Rushdie himself does not lack that indispensable ingredient of the satirist’s gift—the gift of love, of concern and involvement without which his satire would have little meaning and no tragedy.

“Obviously this book is of major interest in Indian readers, and it is tragic to think how unlikely that it will be published, distributed or read in a land that prefers to avert its eyes from the intolerable reality and gaze upon maya, the shimmer of illusion. But Rushdie reminds his readers, ‘Be fair! No body, no country has a monopoly of untruth’ and he quotes from the Urdu piet Iqbal: ‘Where can one find a land that is foreign to God?’ making his book not a national allegory or fable but as universal as the works of Cervantes, Swift, Kafka or Grass.

Midnight’s Children will surely be recognized as a great tour de force, a dazzling exhibition of the gifts of a new writer of courage, impressive strength, the power of both imagination and control and sheer stylistic brilliance.”

“Though written by a Muslim and concerned at considerable length with the militant (and militaristic) Muslim state of Pakistan, Midnight’s Children impressed me as profoundly Hindu in its sensibility. Confronted by a novel of such size (much longer, because of small print, than the number of pages would indicate), complexity, and originality, the reviewer gropes about for analogies. What came to me is the image of one of those astonishing Indian temples—at Khajuraho, say—that symbolize the ‘World-Mountain’ of Hindu mythology. Whether shaped like an upended cucumber or a pyramid with excrescences, the form of such a temple is often obscured (for Western eyes) by the extravagance of its sculptured surface. The riot of gods and goddesses, hooded cobras, flying nymphs, multi-headed demons, garlanded bulls, elephants, monkeys, and copulating couples point to an aesthetic that, like the religion underlying it, is based upon a principle of maximum inclusion. Beside such a teeming world-mountain, even the most intricately arabesqued mosque appears nearly as chaste and symmetrical as the Parthenon.

“The book invokes a bitter plague upon both nations, sparing neither the militaristic jingoism of the Pakistani generals nor what Saleem observes as the hypocrisy, cruelty, and corruption of the Widow’s regime in New Delhi. For India, so hopeful on the day of its independence, has, like Saleem, become prematurely aged, impotent, mutilated, with ominous cracks developing throughout its body. The potential of the magical children of midnight has been systematically cut out.

“As must be clear by now, no one should pick up Midnight’s Children in the expectation of a rousing good story, Western-style. Whatever larger narrative movement it possesses is constantly impeded, dammed up, clogged. The novel’s momentum is supplied not by sustained action but by style—a style that seems to me almost miraculous in its range and adaptive capacities … Mired in the complexities of human love and hate and aspiration, Midnight’s Children is anything but abstract or desiccated in its allegorizing tendencies. Yet I doubt that it will reach a very wide audience in this country. It is long; its scene and subject-matter have no automatic appeal for Americans; it cannot be gulped down. The book will gain ground slowly but, I believe, inevitably. Meanwhile we can hope that its publishers will keep it in print and advance its fortunes where they can. For, as I assume they know, they have an extraordinary novel on their hands, one of the most important to come out of the English-speaking world in this generation.”