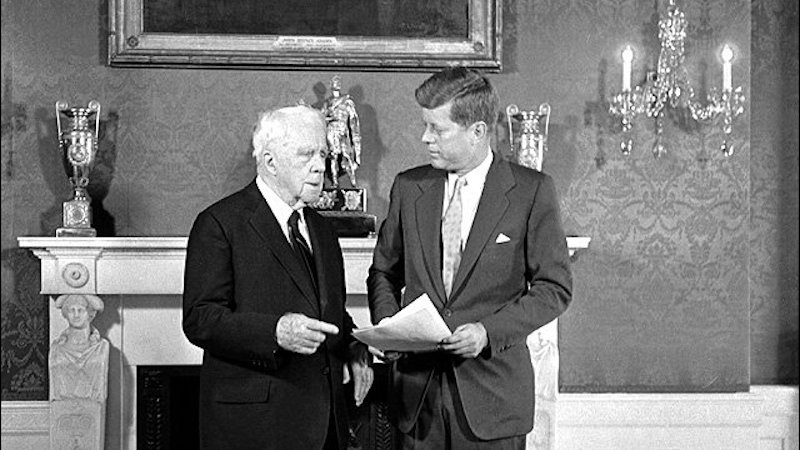 Robert Frost, JFK, and the Lengthening Reaches of Eternity

On the anniversary of his death, we look back at a 1962 New York Times review of Frost's final poetry collection, In the Clearing 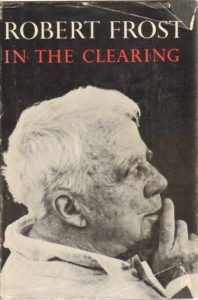 This tribute verse to be his own I bring
Is about the new order of the ages
That in the Latin of the founding sages
God nodded his approval of as good.
So much those sages know and understood
(The mighty four of them were Washington,
John Adams, Jefferson and Madison)
So much they saw as consecrated seers
They must have seen how two hundred years
They should bring down the world about our ears
By the example of our declaration.
It made the least tribe want to be a nation.

“It is our duty to read many other illustrious poets; it is our pleasure to read Robert Frost. He is a bard who never grows bardic and a rhymester who enjoys sharing the unexpected felicities of rhymes. He says:

It takes all kinds of in and outdoor schooling
To get adapted to my king of fooling.

Almost all the literary honors in the world have been heaped upon his head and his shoulders are not tired—just cheerfully bowed. As he enters his eighty-ninth year, his newest book, In the Clearing, shows how buoyantly he has enjoyed his long race with time.

“A thousand textbook-scented essays on the tragic sense of life that animates his work, from ‘The Death of the Hired Man’ to ‘A Masque of Reason’ and ‘A Masque of Mercy,’ may depend our appreciation of Frost with interminable technical soundings.

But is anyone stirred by the glory of the Winged Victory in the Louvre more profoundly upon being presented with the goddess’ tape-measured proportions?

Frost’s most famous poem right now, I imagine, is ‘The Gift Outright’—which he read before the Phi Beta Kappa Society at William and Mary College on Dec. 5, 1941, and to a somewhat larger audience at President Kennedy’s inaugural.

It is reprinted in this new book, together with the longer poem he wrote for the occasion and scattered on the first fresh winds of the New Frontier. 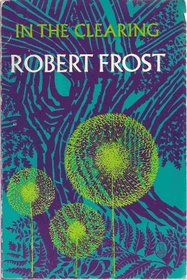 “There is a magnificent profile of rambunctious democracy in the longer poem, and a graceful allusion to President Kennedy’s own Profiles in Courage, and a salute from the living to Washington, John Adams, Jefferson and Madison:

They must have seen ahead what now
appears,
They would bring empires down about our
ears
And by the example of our Declaration
Make everybody want to be a nation.

Perhaps Frost’s most apposite line for the present moment in history is his famous:

Something there is that doesn’t love a wall.

And particularly the rustic yet universal resolution of it, the colloquy-meditation on what ails a fearful neighbor:

What I was walling in or walling out,

And to whom I was like to give offence.

Something there is that doesn’t love a wall,

That wants it down.’ I could say ‘Elves’ to

But it’s not elves exactly, and I’d rather

He said it for himself. I see him there

Bringing a stone grasped firmly by the top

Old-stone savage or new-power-hungry savage, the good-fences-make-good-neighbors philosophy is riddled again in Berlin. For Frost is as much at home in the passing moment, or in ceremonial powwows, as he is in the lengthening reaches of eternity.”