Zoey Punches the Future in the Dick 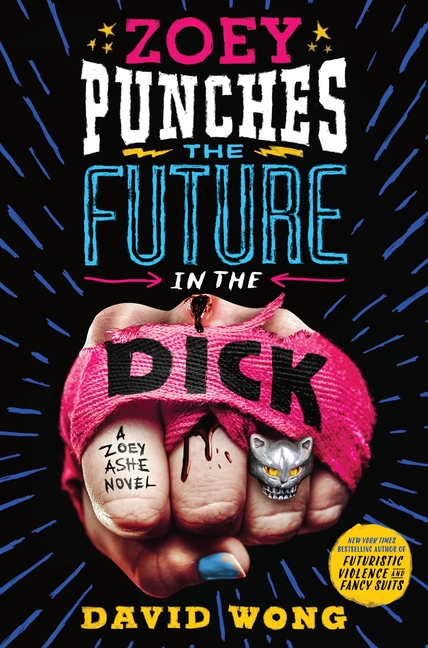 In the futuristic city of Tabula Ra$a, Zoey Ashe is like a fish so far out of water that it has achieved orbit. After inheriting a criminal empire, the twenty-three year-old finds herself under threat from all sides as a rogue's gallery of larger-than-life enemies think they smell weakness.

What The Reviewers Say
Rave Stephanie Cohen-Perez,
BookPage
Wong reprises the witty, satirical narration that readers that have come to expect from his work ... Wong so completely immerses readers in this vivid, technothrilling setting that new characters feel like old friends ... Wong’s sequel is a high-energy and flawless segue into a new episode of Zoey’s life and easily proves itself to be a compelling standalone work ... His combination of captivating character development, sci-fi satire and dark, clever humor is a revelation.
Read Full Review >>
Positive John Keogh,
Booklist
Wong’s trademark imagination and humor remain but it’s his grounded sense of humanity that elevates this work ... Wong knows what makes people tick and his vision of humanity isn’t rose-colored. But he’s also fundamentally an optimist: there are solutions to the problems humanity faces.
Read Full Review >>
Rave Allen Adams,
The Maine Edge
... a sharp and satiric continuation, yet it also manages to largely stand on its own – a relative rarity for genre series ... It’s smart sci-fi that delights in playing dumb, hiding sophisticated ideas and themes behind bizarre set pieces and all manner of creative profanity. It’s also a rip-roarer of an adventure tale, packed with high-concept twists and turns. All in all, it’s a hell of a lot of fun ... What’s so surprising about Zoey Punches the Future in the Dick is how smart it is. I mean, there’s a reference to dick-punching right there in the title – and to be fair, there’s plenty of action and humor that fits squarely with that sentiment – but underneath all the science-fictional trappings, there’s some pretty heady stuff ... We’re talking about thoughtful explorations of the nature of gaming communities and society’s current trend toward celebrity worship and the toxicity of the self-styled men’s rights movement – all of it unspooled by way of a crisply-written, over-the-top genre adventure. Oh, and it’s really funny to boot. Wong’s got jokes, for sure, but he also has a strong grasp of situational comedy as well. It all adds up to a dynamite reading experience ... something different, high-concept ideas in lowbrow clothing. It’s a read that’ll work on whatever level you want it to, opening the door to deeper insight while also operating as straightforward comic sci-fi. Basically, if you want David Wong to punch your brain in the dick, you should check this one out.
Read Full Review >>
See All Reviews >>
SIMILAR BOOKS
Fantasy

The Last Watch
J S Dewes
Positive
What did you think of Zoey Punches the Future in the Dick?
© LitHub | Privacy