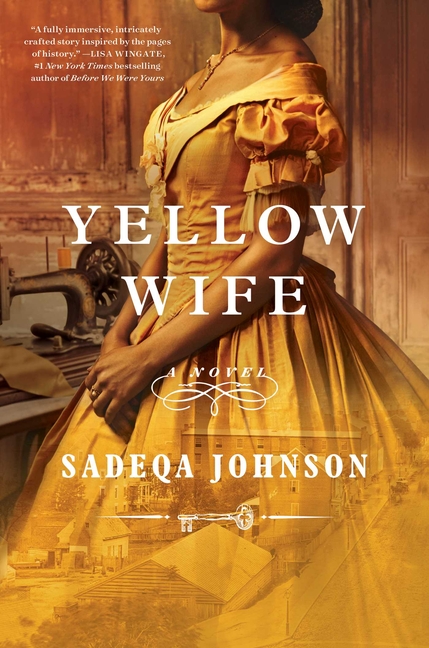 An enslaved woman is forced to barter love and freedom while living in the most infamous slave jail in Virginia.

What The Reviewers Say
Rave Andrea King Collier,
The Christian Science Monitor
Johnson paints a world of rich details of the antebellum South ... Johnson’s portrayal of privilege and a class system among slaves is particularly striking ... doesn’t sugarcoat the realities of slavery. There is no romanticization of the relationship between enslaved persons and their owners, though that trope has been perpetuated in many novels ... Instead, Yellow Wife is unflinching in its descriptions of the violence, inhumanity, and family separations that Black women living in slavery faced, as well as the choices they made to keep their children alive ... Johnson has no interest in softening the story to make it more palatable. As Americans continue to deal with issues of race today, Yellow Wife is the perfect book to help the country see, in part, how it got here.
Read Full Review >>
Mixed Ellen Morton,
The Washington Post
... evokes a vision of one woman’s tenacious survival of antebellum cruelty and objectification ... Before her arrival at the jail, Pheby’s perspective feels naive and unspecific ... Her mother’s familiar scent clearly moves Pheby, but no description invites the reader to share the feeling. She relates events as they happen to her but only inconsistently anchors them in the details, dialogue or personal emotions that would give Pheby’s character texture and singularity ... As Pheby settles into life under Lapier’s brutal surveillance, her point of view becomes a more essential window to the story ... The high wire Pheby balances on provides the novel’s keenest tension, but its potential is sometimes lost among underserved narrative threads and plot points that don’t pay off. Ultimately, Johnson’s author’s note may be the most fascinating chapter of all: a description of the true stories that inspired the novel.
Read Full Review >>
Mixed Clarissa Harwood,
The Washington Independent Review of Books
The way she keeps a record of these girls’ stories and treats them like daughters during her brief sessions with them is beautiful and heart-wrenching. And even though Pheby’s attempts to assuage the suffering of other slaves seem like pathetically small gestures, they are no doubt realistic for a woman in her situation ... This novel — whose main characters are based on real people — is not for the squeamish. Vivid, detailed descriptions of torture and sexual abuse are numerous and could trigger some readers. And while author Sadeqa Johnson has created an interesting protagonist and a generally gripping story, the ending seems rushed. Although a planned escape forms the climax of the novel, the action falls strangely flat ... The most affecting parts of Yellow Wife focus on motherhood.
Read Full Review >>
See All Reviews >>
SIMILAR BOOKS
Fiction