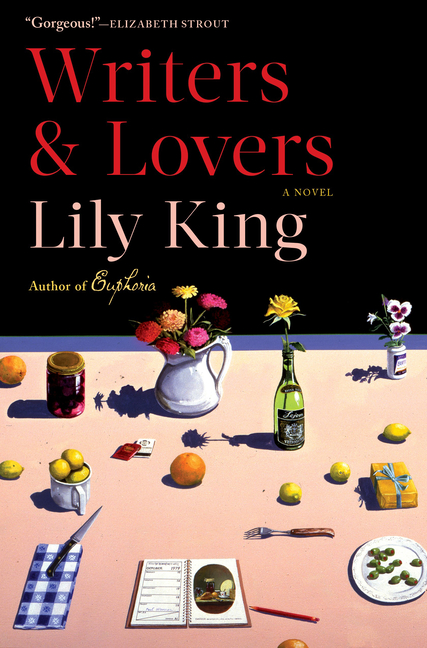 Blindsided by her mother’s sudden death and wrecked by a recent love affair, Casey Peabody has arrived in Massachusetts in the summer of 1997 without a plan. A former child golf prodigy, she now waits tables in Harvard Square and has spent the last six years working on a novel. When she falls for two very different men at the same time, her world fractures even more.

What is this?
Positive
Based on 38 reviews

What The Reviewers Say
Rave Elizabeth Egan,
The New York Times Book Review
Even with a handful of compelling plots in the air, King is at her wisest and most self-assured when she shows how Casey gradually gets her bearings as a motherless daughter: one step forward, two steps back. Losing a parent at any age is the pits, but being the first of your friends to go through it—to be the one writing a eulogy when everyone else is writing wedding vows—is its own fresh hell. Writers & Lovers bravely traverses that pain ... After a while, I didn’t bother to dog-ear anymore; I just held the book open and let my tears fall on the page. I’m not talking crying-emoji tears; I mean actual sobs, the most cathartic kind ... a story where absence is a constant presence, stitched with humor, determination and hope.
Read Full Review >>
Rave Ron Charles,
The Washington Post
... wonderful, witty, heartfelt ... Writers & Lovers is a funny novel about grief ... it’s dangerously romantic, bold enough and fearless enough to imagine the possibility of unbounded happiness ... This is a bracingly realistic vision of the economic hopelessness that so many young people are trapped in: serving extraordinary wealth but entirely separate from it ... the arc of this story [is] so enchanting. All of these tragedies and obstacles are drawn with stark realism and deep emotional resonance. But even during the early pages, we can sense Casey’s spirit crouching in determined resistance ... As in her previous novels, King explores the dimensions of mourning with aching honesty, but in Writers & Lovers she’s leavened that sorrow with an irreducible sense of humor ... With Casey, King has created an irresistible heroine—equally vulnerable and tenacious—and we’re immediately invested in her search for comfort, for love, for success ... The result is an absolute delight, the kind of happiness that sometimes slingshots out of despair with such force you can’t help but cheer, amazed.
Read Full Review >>
Rave Amy Pedulla,
The Boston Globe
King deftly crafts a young woman aching to reach a personal Nirvana ... Death permeates the book, it looms above every character’s outline, and King skillfully colors each of them in a different hue ... In Casey, King has created a woman on the cusp of personal fulfillment and strong enough to stand on her own, someone akin to Sally Rooney’s Frances in Conversations with Friends—both writers home in meticulously on female personal development mediated by capitalism, art, sexual relationships vs. romance, and friendship ... King’s novel is a defense of writing, sure; her character finds her voice in the end and brings her novel to completion, and finally sells it. But King aims for something higher than that. The novel is a meditation on trying itself: to stay alive, to love, to care. That point feels so fresh, so powerfully diametrically opposed to the readily available cynicism we’ve been feasting on
Read Full Review >>
See All Reviews >>
SIMILAR BOOKS
Coming Soon