Work: A Deep History, from the Stone Age to the Age of Robots 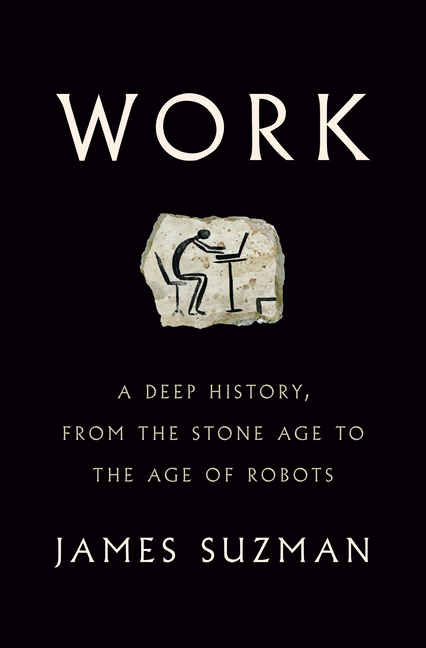 A leading anthropologist charts a grand history of 'work' from the origins of life on Earth to the ever more automated present, challenging deep assumptions about who mankind is.

What The Reviewers Say
Positive Derek Thompson,
The Atlantic
Robinson’s most unexpected insights were about American discontent. We may constantly complain about our harried schedules, but the real joy-killer seemed to be the absence of any schedule at all. Considerably less happy than the just-rushed-enough, he said, were those with lots of excess time ... his discussion highlights at a macro level what the Sunday scaries signal on a personal level: Modern life has made it harder for Americans to forget about their work ... what Suzman’s foray into humanity’s past reveals is that leisure has never been the ready default mode we may imagine, even in the chillest of cultures. The psychological cost of civilization, the scourge of the Sunday scaries, and the lesson of the Ju/’hoansi converge in an insight worth taking to heart: Safeguarding leisure is work. While progress depends on pinning our hopes on a world that doesn’t yet exist, those who cannot stop planning for the future are doomed to labor for a life they will never fully live.
Read Full Review >>
Positive Emma Jacob,
The Financial Times (UK)
Suzman shows that, rather than struggling for scarce resources, the Ju’hoansi were relaxed and optimistic about their food supplies. They did not accrue reserves but worked short stints to find and prepare their food, leaving them free to devote most of their time to leisure ... Whatever the merits of such ideas, the long view of work is a reminder, as Suzman writes, that while we resist change, ultimately we adapt. If such a sentiment seems lyrical when people are losing their jobs, it may also provide hope.
Read Full Review >>
Mixed James Mariott,
The Times (UK)
Suzman argues that for all our modern belief that work gives us 'purpose' and 'meaning', it is not natural for human beings to work much at all ... for the book to have taken flight Suzman needed to find new, audacious ideas about work in the centuries that followed. But he writes with less conviction and less detail about promising subjects such as the rise of cities, the Industrial Revolution and the rise of modern management techniques. With more time in the library and a bit of Sapiens-style intellectual daring, this book could have provided real intellectual thrills. Next time he needs a research assistant and a bottle of gin ... There is definitely a grand theory of everything to do with the history of work to be written. Suzman’s book isn’t quite it. But if you read Suzman, then Markovits, then Graeber, you’ll be most of the way there.
Read Full Review >>
See All Reviews >>
What did you think of Work: A Deep History, from the Stone Age to the Age of Robots?
© LitHub | Privacy