Words and Worlds: From Autobiography to Zippers 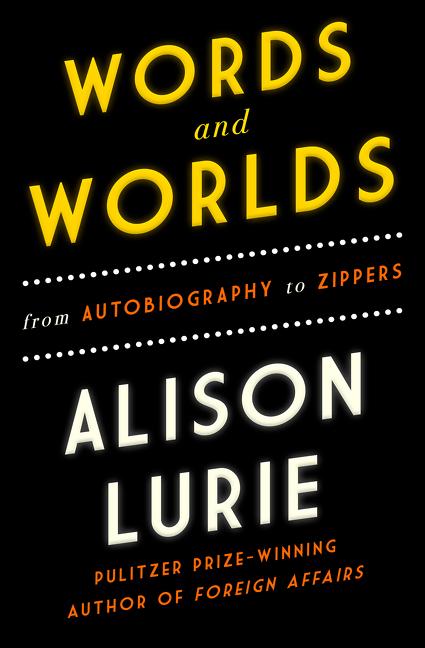 This new collection of essays from the New York Times–bestselling novelist gathers together her reflections on the writing life; fond recollections of inspiring friends; and perceptive, playful commentary on preoccupations ranging from children’s literature to fashion and feminism. Citing her husband’s comment to her that 'Nobody asked you to write a novel,' Lurie goes on to eloquently explain why there was never another choice for her.

What The Reviewers Say
Positive Jennifer Bort Yacovissi,
Washington Independent Review of Books
Now, 57 years into her publishing career, Lurie brings us this eclectic collection of essays that runs the gamut of subjects, as the book’s subtitle suggests. (And, just as an aside, the preface is as much an essay as any of the other pieces in the book; don’t skip it.) ... [The] first two were among my favorite in the collection. Perhaps because I’m a novelist, Nobody Asked You to Write a Novel had significant appeal, but primarily for her story of growing up feeling like an outcast, 'a skinny, plain, odd-looking girl' who appeared to have no particular skill or talent beyond her creativity — which, as we’ve all been told in our own childhoods, is not what’s going to pay the bills ... So, what about zippers? The author, who wrote The Language of Clothes, has spent a lot of time considering what our clothes say about us before we ever get a word in. She notes that zippers changed forever what it took to get dressed, and, more importantly, undressed. As Lurie quotes a movie expert, 'When you’re talking about zippers, you’re already talking about sex.' Now we’re talking.
Read Full Review >>
Positive Kirkus
Although a few of the essays—e.g., on women’s decisions to change their surnames after marriage, the meaning of aprons, or fashion’s arcane rules—seem dated and others rather slight, most are engaging ... An appealing miscellany.
Read Full Review >>
Positive PW
Lurie approaches all of her subjects with the acumen of a seasoned critic but frequently draws on her skills as a Pulitzer Prize–winning fiction writer to give shape to her thoughts, as when she wryly describes the circumlocutions in critical papers written by deconstructionists as giving 'the impression that their authors are flies struggling in the sticky verbal strands of theoretical discourse.' Lovers of literature and the arts will find this a delightful and rewarding volume.
Read Full Review >>
See All Reviews >>
What did you think of Words and Worlds: From Autobiography to Zippers?
© LitHub | Privacy