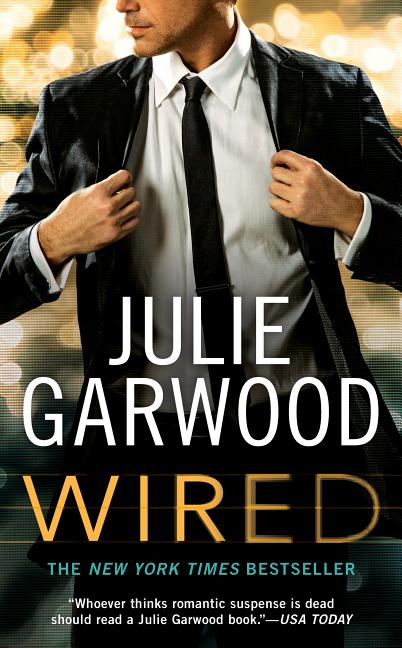 A beautiful computer genius and a bad-boy FBI agent must collaborate—in more ways than one—in the steamy new suspense novel from the New York Times-bestselling author.

What The Reviewers Say
Rave Jackie K. Cooper,
The Huffington Post
Garwood knows just the right amount of sex, passion, drama and mystery to blend into every story ... In Wired it is the romance and sex. There is a tiny bit of suspense thrown in based on Allison’s family background, and a fellow student who wants to steal one of her best computer programs. This is minor stuff when compared to the devotion to detail allotted to the romance between Allison and Liam. And the romance is steamy enough to drive even her coolest readers crazy ... Wired is a steamy, sexy thriller that will have her adoring fans begging for more, more, more.
Read Full Review >>
Rave Harlequin Junkie
Although I haven’t read the other books of this series, I can easily say that this story can be read as a stand-alone, and right from the beginning it was everything I’d hoped for ... I’m talking about...romance and suspense, and this book had it in spades as Alison is not just in danger from one threat, but from a few. The way this story started had me liking the heroine immediately, as she isn’t afraid to do things to right the wrongs of the world, even though she knows she could get in big trouble with the authorities. Will she get in trouble if someone finds out what she’s done? As for the dialogue, it was exhilarating and captivating ... a wonderful and exciting read in this book, which kept me entertained from start to finish due to this couple’s growing relationship, the way they teased each other at times, the trouble they face, the secondary characters in Alison’s sister and friend that supported her need to break free from the past and the ending that had me on the edge-of-my-seat due all the threats Alison was facing that had me wanting to discover who would come after her.
Read Full Review >>
Mixed Lisa Fernandes,
All About Romance
Wired is, for the most part, a big, chewy, sweet chunk of wish fulfillment. If you aren’t into realism and you want some good old fashioned escapism then you’re likely to take to this book like a duck to water. Unfortunately, it’s got several major flaws ... Allison and Liam are the most pure of canon Sues; good-looking and ultra-intelligent, they come off more as sentient dolls than human beings. Allison suffers from Superhuman Heroine syndrome. Not only is she a puzzle-solving genius with model looks, she’s smart enough to beat FBI code-breakers at their own game ... Liam is her Stu-twin in every way. It’s not enough for him to be the best FBI agent in Boston; he’s also a top notch lawyer and the best around at being a cool, confident man ... The romance is...well, stilted and sometimes creepy, as the author seems content to focus on the problems of Allison’s hacking and her family relationships, with the occasional paragraph featuring her and Liam lusting after each other or Liam behaving like a possessive alpha ... sadly this one misses the mark and turns out to be a bit of a formulaic jaunt.
Read Full Review >>
See All Reviews >>
SIMILAR BOOKS
Fiction

Untouchable
Jayne Ann Krentz
Positive
What did you think of Wired?
© LitHub | Privacy