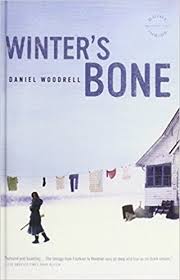 In Daniel Woodrell's eighth novel, a stoical Appalachian girl strives to rescue her family from her father’s criminal legacy.

What The Reviewers Say
Rave David Bowman,
The New York Times Book Review
Winter’s Bone is as serious as a snakebite, with a plot that seems tight enough to fit on the label of a package of chew ... Young Ree Dolly allows Woodrell to glide this novel seamlessly from violence to innocence. She is hard-boiled. She is harsh. She can be sweet ...structured like a Philip Marlowe story in which, for each clue the dick digs up, he returns to his office to mull things over with a shot of scotch ... The whole Ozark milieu is rendered so completely and expertly that Woodrell should consider changing the settings of his future novels, just as Cormac McCarthy gave up Tennessee for Mexico ... His Old Testament prose and blunt vision have a chilly timelessness that suggests this novel will speak to readers as long as there are readers, and as long as violence is practiced more often than hope or language.
Read Full Review >>
Positive Adam Woog,
The Seattle Times
Ree Dolly, the heroine of Daniel Woodrell's luminous new novel, is 'brunette and sixteen, with milk skin and abrupt green eyes ... [standing] tall in combat boots, scarce at the waist but plenty through the arms and shoulders, a body made for loping after needs' ... Ree's experiences with these and other figures are brutal and often gruesome, and the story's end is an eerie surprise ... Winter's Bone is compact, atmospheric and deeply felt, drenched in the sights, sounds and smells of the author's native Ozarks ...tap a ferocious, ancient manner of storytelling, shrewdly combining a poet's vocabulary with the vivid, old-fashioned vernacular of the backwoods. They're forces of nature.
Read Full Review >>
Rave Carolyn See,
The Washington Post
If you're going to read Winter's Bone, it's best to plan on reading it twice –– once to get the feel of the thing and once to figure out who is who, who's got the power here and what opaque and arcane rules hold this world together ... In the hands of a conventionally educated urban author, these characterizations would seem intolerably condescending and elitist...not taking cheap shots; he's reporting life as he sees it ... The action plays out like an old-fashioned, hard-boiled novel ... Winter's Bone revolves around questions of grit, courage, authenticity, a willingness to face the pure physical unpleasantness of the way things are ... Woodrell simply shows us a world, the raw meat of it. If we can't stomach his reality, it's our problem, not his.
Read Full Review >>
See All Reviews >>
SIMILAR BOOKS
Coming Soon

The Last Karankawas
Kimberly Garza
Rave
What did you think of Winter's Bone?
© LitHub | Privacy