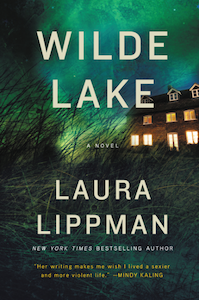 A thriller tracing a family’s journey from raucous Baltimore to the meticulously planned community of Columbia, Maryland.

What The Reviewers Say
Rave Patrick Anderson,
The Washington Post
The book is unusual in that Lippman spends more time relating Lu’s childhood and family life than she does the novel’s nominal plot, which concerns a murder case that Lu prosecutes. But Lippman’s portrayal of Lu’s girlhood and family is so exceptional, readers won’t miss the legal drama. You rarely find characterizations as sensitive as these in genre fiction or, indeed, any fiction ... Lippman’s novels are tough-minded, entertaining, heartfelt and wise, and they have deservedly won the Edgar award, the Anthony, the Agatha and every other crime-fiction prize. She’s one of today’s essential writers, and this, her 20th novel, reminds us why.
Read Full Review >>
Rave Lloyd Sachs,
The Chicago Tribune
Ultimately, Wilde Lake is not so much a crime novel that rises to the level of serious literature as serious literature that rises to the level of great crime fiction ... In the case of this novel, the form allows the author to share her outspoken female wisdom on everything from civil rights — though recent events in Baltimore are only alluded to, they haunt the narrative — to homosexuality during the poisonous Reagan era to parenthood. Though we always want there to be a reason for the things our children do, Lu says as narrator, sometimes 'the wheel spins and you get a damaged kid.'
Read Full Review >>
Positive Scott Turow,
The New York Times Book Review
Wilde Lake is engrossing, suspenseful and substantial, its wit easing a sober, somewhat elegiac air. Lu is surrounded by loss, not only of the utopian dream but of so many people in her life: her mother, her husband, her brother’s best friend (dead of AIDS). And then there’s the lingering shadow of the three homicides — the killing on AJ’s graduation night, her father’s prosecution and the Drysdale case — that tie together past and present ... the conclusion of Wilde Lake is not its high point. ­Lippman artfully exploits the expectations of mystery readers to augment her plot’s surprises. But too much has been hidden without good reason, both by the characters and by the author.
Read Full Review >>
See All Reviews >>
SIMILAR BOOKS
Literary

Please See Us
Caitlin Mullen
Rave
What did you think of Wilde Lake?
© LitHub | Privacy