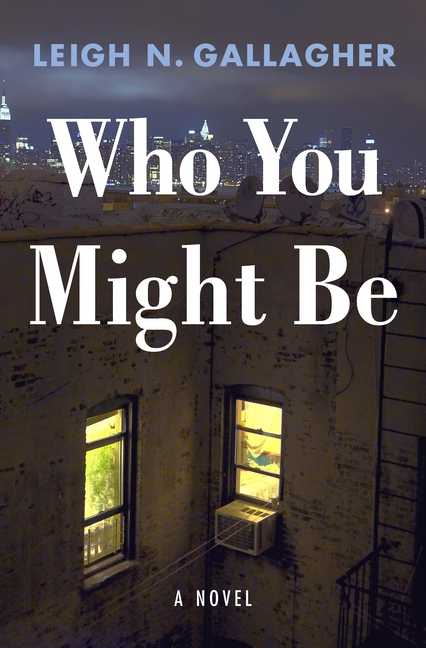 A debut from Leigh N. Gallagher, Who You Might Be takes readers from 1990s Southern California to a UFOlogist holdout in Nevada, the graffiti playground of Detroit, and a self-important New York art scene in an examination of how life’s most unexpected turns―and the people we meet along the way―shape who we become.

What The Reviewers Say
Positive Kristen Allen-Vogel,
Shelf Awareness
... thoughtful ... While readers may wish that some aspects of the earlier timeline were more fully tied up or further explored, those characters who return vividly demonstrate the lingering effects of their teenage traumas and the stories they'd told themselves to address them. Gallagher's debut establishes her as one to watch.
Read Full Review >>
Mixed Kristine Huntley,
Booklist
Gallagher’s first novel follows several young teenagers who find trouble in disparate parts of America in the mid-1990s...Fourteen-year-old Judy, unmoored by the unwanted attentions of her new stepfather, impulsively decides to go to a party several hours away from her home in Los Angeles with her friend Meghan, who has connected with a slightly older girl named Cassie on the internet. But upon arriving at the address provided by Cassie, the girls find an unsettling older woman who imprisons them in Cassie’s room. The real Cassie is just 12, and has traveled to Nevada to visit her aloof mother following a horrific assault she’s kept secret...Some of these characters narrowly avoid tragedy, while others do not fare as well...An ambitious, if at times uneven, debut.
Read Full Review >>
Positive Kirkus
When 14-year-olds Meghan and Judy sneak away to find Cassie—supposedly a model—whom they’ve grown to adore in a chat room, their disappointing mothers barely notice their daughters’ absences...There are a few too many characters for comfort: Meghan, Cassie, Miles, and Tez all get outsized attention given their secondary roles in the arc of the novel...Until Part 3, it is unclear who will matter, and it can be disappointing when beloved figures are forgotten...Still, the prose is good, the plot progresses at a satisfying clip, and the characters are endearingly flawed (except for Judy/Jude, whose only moral flaw is having a bad mother, lover, and friend)...Gallagher writes meaningfully about the intergenerational impacts of addiction, abuse, and sexual violence...An earnest novel about the insecurities of adolescence and the impossibility of escaping one's past.
Read Full Review >>
See All Reviews >>
SIMILAR BOOKS
Coming Soon

Fellowship Point
Alice Elliott Dark
Rave
What did you think of Who You Might Be?
© LitHub | Privacy