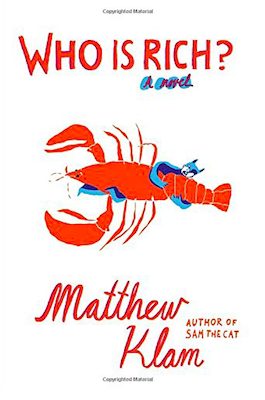 From the author of Sam the Cat, a satire of love, sex, money, and politics that unfolds over four wild days in so-called 'paradise.' Rich, a middle-aged, once celebrated graphic novelist, contemplates whether or not to leave his wife and children for a student at an East Coast artist's retreat.

What The Reviewers Say
Rave Ron Charles,
The Washington Post
This is an irresistible comic novel that pumps blood back into the anemic tales of middle-aged white guys. Klam may be working in a well-established tradition, but he’s sexier than Richard Russo and more fun than John Updike, whose Protestant angst was always trying to transubstantiate some man’s horniness into a spiritual crisis ... In paragraphs that flow like conversation with a witty, troubled friend, Klam captures Rich’s squirrelly consciousness, swinging from lust to despair, turning his comic eye on others and then on himself ... But for all its wise gender comedy, Who Is Rich is also a brilliant rumination on the trap of cannibalizing one’s life for art.
Read Full Review >>
Rave Steve Almond,
The Boston Globe
...one of those novels with the rare power to mesmerize. It’s a dazzling meditation on monogamy, parenthood, mortality, shame, erotic liberation, and artistic struggle, a tale told by an adulterous middle-aged schlub, full of sound and fury, and signifying, well, pretty much everything ... The plot is rudimentary and almost beside the point: Rich and Amy flirt, surrender to lust, retreat, reconnect, and bid farewell. The novel’s genius resides in the manic, self-lacerating voice of the narrator, one that will be familiar to fans of Klam’s celebrated debut collection, Sam the Cat, which mined the masculine angst of modern courtship ... Klam is writing in the tradition of Updike, Bellow, and Roth, unspooling an unabashedly masculine account of midlife crisis. But his female characters are never reduced to caricature. He sees in them a distinct but nuanced struggle for selfhood ... Klam has brought to life an indelible character, a man painfully alive on the page, cowardly in actions but utterly fearless in confronting hard truths we spend most of our lives evading.
Read Full Review >>
Rave Jia Tolentino,
The New Yorker
...a gem within the canon of infidelity literature ... One of the nicest and saddest things about Who Is Rich? is the way that Klam goes all in on the pathos of feeling completely unwanted—a state that has become native to Fischer both professionally and in bed ... In the world of Who Is Rich? everything is embarrassing and beautiful. A chain of unexpected events at the conference leads to Fischer and Amy consummating their queasy first anniversary while on an excess of OxyContin...It’s such a turgid, sunlit, immensely particular encounter that it quietly proves the project shared by Klam and his protagonist—this affair is unique, it is special, it is one for the books. It’s also one of the only moments when Fischer is able to really accept and take pleasure in his diminished ambitions.
Read Full Review >>
See All Reviews >>
SIMILAR BOOKS
Coming Soon

Bliss Montage: Stories
Ling Ma
Rave
What did you think of Who Is Rich??
© LitHub | Privacy