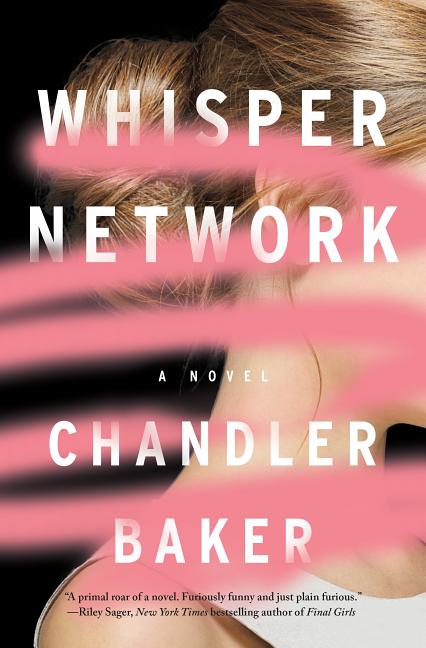 When they realize that their boss, Ames—a whispered-about serial harasser of women—is slated to rise to CEO of Truviv, Inc., Sloane, Ardie, Grace, and Rosalita are incensed. And when they learn Ames has made another inappropriate move on a colleague, they decide to take a stand—revealing company secrets and setting in motion a catastrophic shift in the office.

What The Reviewers Say
Positive Caroline Kepnes,
The New York Times Book Review
What Chandler Baker serves up in Whisper Network, her adult debut, is part soapy shocker...and part legal thriller...Think Big Little Lies meets the famous 2017 list of men in the media industry accused of sexual harassment...Baker, who practices law professionally, protects her protagonists like a pit bull defense attorney ... The most compelling voice of all belongs to the insightful and pragmatic Rosalita Guillen,...Rosalita’s life story is emotionally wrenching, and you long to know more about it. Her insights into the men and women of Truviv offer a reprieve from Paleo diets and office cake. You want to get back to the story, maybe even rewind the clock and see Rosalita cope with her nightmarish situation day in, day out. After all, every whisper network relies on people speaking up as individuals, sharing their experiences. The same applies to this Whisper Network, too.
Read Full Review >>
Positive Emily Gray Tedrowe,
USA Today
A strong feature of Whisper Network is the unnamed narrator at the beginning of each chapter ... Functioning as a kind of #MeToo era Greek chorus, these sections are vivid and compelling, offering an insider’s perspective on the true cost of female ambition in the workplace ... Far more interesting than the takedown of a caricatured bad boss is the way women at Truviv use skills honed on the job in order to form alliances, create opportunities and protect each other. Read this novel for a spirited take on the rage that simmers just below the surface of today’s woman in the corner office, the cubicle or the break room.
Read Full Review >>
Pan Paola de Varona,
The Outline
The book fills many of its pages with generalizations about corporate women ... Tarana Burke, the initial founder of the #MeToo phrase, has critiqued the movement for lifting up wealthy white women, while leaving women of color behind. We see this dynamic play out in Baker’s version of the story. Ardie’s identity as a Latina is glossed over and comes across as only accessory ... Throughout the novel, the description of the women’s day-to-day encounters with sexism and misogyny are rampant, but the same space isn’t given to the trauma that bleeds into the way they navigate their relationships, sex, and friendships. Baker doesn’t show us how each of them faced their abuser every day for years, without experiencing PTSD or pausing their careers ... Reality, of course, is much messier than Baker’s depictions ... Baker’s epilogue, an impassioned speech about women speaking up, is hardly as satisfying as one that depicts the complicated aftermath of sexual harassment. Asking the reader to believe something that probably wouldn’t happen in real life might be how fiction works, but here, it is particularly unbelievable.
Read Full Review >>
See All Reviews >>
SIMILAR BOOKS
Fiction

The Hacienda
Isabel Cañas
Positive
What did you think of Whisper Network?
© LitHub | Privacy