When My Brother Was an Aztec 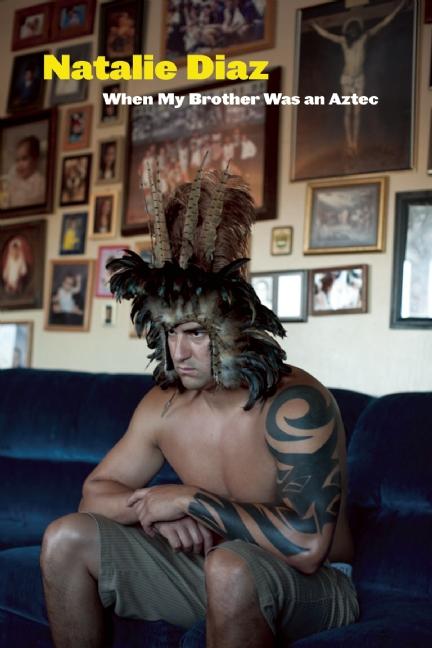 This debut collection is a fast-paced tour of Mojave life and family narrative: A sister fights for or against a brother on meth, and everyone from Antigone, Houdini, Huitzilopochtli, and Jesus is invoked and invited to hash it out. These darkly humorous poems illuminate far corners of the heart, revealing teeth, tails, and more than a few dreams.

What The Reviewers Say
Rave Mark Schoenknecht,
Sink
Characterizing her brother as a fallen Aztec King, a leader of that once-great civilization of warriors, Diaz becomes—by extension—the Warrior/Sister fighting to rescue her brother from the negative influences corrupting him. Within this struggle, she also locates the thematic foundations of her wider poetic project, the overarching narrative continually spiraling back to a family and culture made violent by European exploitation. But such violence is never simple or maudlin ... Indeed, in developing her personal mythology, Diaz is able to distill her experiences down to their emotional truth, and to locate the words and images that best express these feelings—even if such words and images don’t come out of her autobiography ... The fact that Diaz can bring fresh insight and meaning to something as grim as a brother’s methamphetamine addiction is a testament to her skill as a poet. That she can do so while also offering the possibility of a radical political critique, applying the structures of myth as an elegant overlay to the content of her poetic vision, should solidify Diaz’s place as one of the most exciting young poets to enter the American literary scene in recent years.
Read Full Review >>
Positive RYAN TEITMAN,
The Rumpus
There’s both anger and tenderness in these poems. They don’t turn away from the scraping and fighting that people need to do—like the gathering candy from the road—just to survive ... The brother is a millstone for the speaker and her family, but he’s also a lithe, dynamic, protean presence, a powerful vehicle for Diaz’s excellent powers of description. She transmutes his bony shoulder blades into 'a failed wing' and 'a silver shovel' ... One of Diaz’s strengths is her ability to use received forms (like the abecedarian, the pantoum, the triolet, and the ghazal) without making them into exercises ... the bigness of her poems serves her well: Diaz’s debut is a formidable, impressive collection.
Read Full Review >>
Positive Eric McHenry,
The New York Times Book Review
...metaphor is Diaz’s way of dealing with [her brother's addiction]. It allows her to dramatize both his shape-shifting and her efforts to pin him down, and its insufficiency is a big part of the pathos in this first collection ... On the evidence collected in this ambitious, uneven, beautiful book, her skill with metaphor owes much to her being a good listener.
Read Full Review >>
See All Reviews >>
SIMILAR BOOKS
Fiction

Fantasia for the Man in Blue
Tommye Blount
Rave
What did you think of When My Brother Was an Aztec?
© LitHub | Privacy